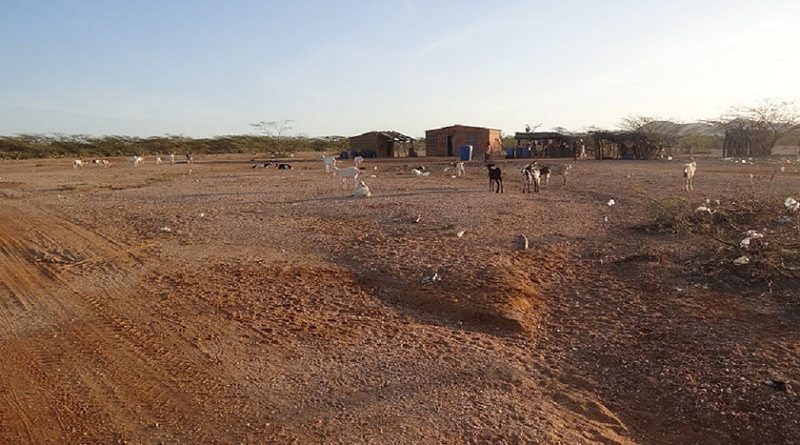 On May 22, Rosalina Ushaina died from malnutrition. In her short nine months of life, the little Wayuu girl became a victim of the social and economic inequality she was born into.

This year alone, the Wayuu indigenous peoples’ leadership has reported 17 deaths from malnutrition. However, the numbers are not always accurate. “Here, babies are not registered at birth, they do not receive attention by public health institutions and when they die, they also die in anonymity,” commented Javier Rojas, a Wayuu leader.

The Wayuu people are the largest indigenous tribe in northern Colombia and northwest Venezuela. [i] In Colombia, they live in La Guajira department. Their home area is comprised of 20,000 km and is rich in salt and petroleum deposits. Families often earn a living from harvesting salt and extracting petroleum, but their main sources of income are cattle ranching and fishing, which makes them particularly vulnerable to the effects of climate change. [ii]

Recently, in La Guajira region, there have been severe water shortages, which have been exacerbated by a lack of rain for three years. [iii] Over the past few years, this drought has caused over 20,000 of the region’s cattle to die. [iv] For water, many of the Wayuu communities rely on the Ranchería River, one of the longest rivers in La Guajira. Without this water, their struggle to survive becomes increasingly strained.

In addition to suffering from the effects of climate change, the Wayuu must compete for water with a powerful mining consortium. La Guajira is home to the continent’s largest open-pit coal mine. [v] El Cerrejón mine is co-owned by BHP Billiton, Anglo American, and Xstrata, which are among the largest mining companies in the world. This consortium is no stranger to the region, as it has been operating in it for more than 30 years, and its interests are well represented in the government. [vi]

The power differential between El Cerrejón and the Wayuu was apparent in the construction of the El Cercado dam. [vii] When construction of the dam started in 2006, the government promised that stopping the flow of the Ranchería River and creating a reservoir would provide nine communities with improved access to water. [viii] After the dam was completed, however, it became clear that while the reservoir would supply El Cerrejón, the Wayuu communities would be unable to access water from either the reservoir or the river, which would leave them worse off than they had originally been. [ix]

In Resolution 64/292, the United Nations recognizes that every human being has the right to clean water. [x] This right has been taken away from the Wayuu by El Cerrejón, which utilizes millions of liters of water every day for its extractive activities at the expense of the local residents who need it.[xi] Unfortunately, the diversion of the Ranchería River is not the only impact of this arrangement. In the past, the course of the Aguas Blancas creek was changed by El Cerrejón for its own benefit. Additionally, the company has received a license to do the same to Bruno Creek, located in the municipality of Albania, where other indigenous communities dwell. [xii]

In August 2016, the Supreme Court of Colombia ordered the opening of the Ranchería River and expressed its concern about the deaths of a number of children associated with the lack of water and malnutrition. [xiii] For years, the Inter-American Commission on Human Rights (IACHR) has been warning Colombian authorities about the alarming situation of malnutrition in La Guajira. In March 2017, the IACHR issued measures to expand the list of beneficiaries, which would favor pregnant and nursing Wayuu women in the municipalities of Manaure, Riohacha and Uribia.[xiv] However, with the current under-representation in the political arena, there is little hope that the situation will change, at least in the short term. “Our kids are dying of hunger and thirst,” Mr. Rojas, the indigenous leader, stated with indignation.

Although the administration of President Juan Manuel Santos is sending food aid to La Guajira, these actions are insufficient for coping with the roots of the problem.[xv] The Wayuu people do not want to be sent food, but instead the basic conditions that would allow them to provide for their families.[xvi]

Between 2000 and 2013, approximately 613 extreme climate and hydro-meteorological events have occurred in the Latin American region; “these hydro-meteorological events include typhoons, hurricanes, hailstorms, tornados, blizzards, floods, drought, and heatwaves.”[xvii] For example, on March 31 of this year, hundreds of people died and disappeared in a flood that resulted in the torrential overflow of the Mocoa River.[xviii] This forced “walls of water, mud, uprooted trees and boulders the size of cars [to crash] through the town.”[xix] Deforestation played a vital role in causing such a tragedy, as cutting down too many trees often leads to severe erosion and sedimentation in the rivers which exacerbates landslides.[xx]

In addition, tropical storms from the Atlantic and the Pacific have affected Mexico, parts of Central America, and the Caribbean.[xxi] The Amazonia, northeastern Brazil, Central America, and the Caribbean are particularly susceptible to severe droughts.[xxii] There is also a definite rise in sea level; for example, the Caribbean Sea has increased 3.5 millimeters per year.[xxiii] These changes in global and regional patterns have especially affected people living in rural areas such as indigenous groups who depend on the earth’s resources and appropriate climatic conditions.

As previously stated, the droughts in La Guajira area have caused the Wayuu people to look for adjacent sources of fresh water, no matter how perilous. However, with the regression being witnessed with El Cerrejón’s repression and the foreign control of fresh water source, La Ranchería, the Wayuu are being prevented from accessing it. The community leaders are doing their best to help their people. For example, Rojas traveled all the way to Washington, D.C. to meet with members of the Washington Office on Latin America in order to participate in a panel discussing the Wayuu crisis.  Many of the leaders have tried to raise awareness about their plight but, without much representation in the government, the progress that can be made is rather limited.

As the effects of climate change become more severe, indigenous people will be on the frontlines of suffering, both because their livelihoods are often more acutely vulnerable to environmental change and because their concerns are rarely heard or addressed by government.

The Wayuu are being denied their fundamental right to access fresh drinking water. Without such water supply, many more indigenous people will die. There is much that can be done to aid the Wayuu, such as opening up space for further indigenous peoples’ representation in the government. They must have the opportunity to adequately share their voice and deliver on their own agenda, which in the end can benefit the entire community, since climate change affects everyone at this stage. Santos must not turn a blind eye and deaf ears to the indigenous people in their cries for help.