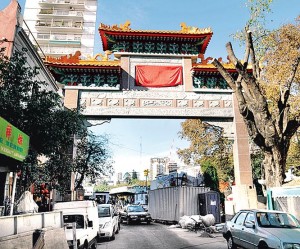 Amid the sea of Argentines of European descent dwelling in Buenos Aires, one may occasionally notice a few Chinese-Argentines — an immigrant community that has been growing rapidly throughout the years. Attracted by Argentina’s open immigration policy in the late eighteenth and early nineteenth century, immigrants from Spain and Italy flocked to the country en masse. Soon thereafter, in the twentieth century, Latin America as a whole experienced an influx of Chinese immigrants that provided manpower in the agricultural and fishing industries.

Like most immigrants, the Chinese sought new land where they could establish their roots. In Argentina, they capitalized on educational and economic opportunities while enjoying “easy access to nature and large open spaces,” non-existent in crowded Chinese cities.  As of 2009, approximately 120,000 Chinese people lived in Argentina. After World War II and the Korean War, Asian-Argentines migrated in three waves, consisting of the Japanese, followed by the Koreans, and lastly, the Chinese.  Chinese immigrants in Buenos Aires soon established a tight-knit community, creating a “Chinatown” in the neighborhood of Belgrano.

With the number of Chinese natives growing steadily in Argentina’s large cities, it is no surprise that their culture has become a part of modern Argentine society. The Chinatown in Buenos Aires, though relatively small in size, is a true indication of the increased presence of Chinese-Argentines.  Shops peddling delightful collectibles and trinkets, and streets filled with the aroma of as-authentic-as-you-can-get Chinese food have become an integral part of the greater Argentine community.

Aside from generating local business, the Chinese have made their mark in the country in many other ways. Mandarin Chinese has become increasingly prominent in Argentina, as it is considered an appealing language to learn and master in business, given the expanding Chinese market and its rising clout in international diplomacy, trade and finance. Interviews conducted by the Xinhua News Agency reveal that the academic relevance of China’s rise to power “has been so impressive” that experts expect a continued increase of students studying Chinese in Argentina; in 2005, there were only 100 students, now there are more than 900.

Yet despite a certain level of social integration, the presence of Chinese-Argentines has sparked controversy. In June 2006, a misunderstanding between an Argentine delivery truck driver and Chinese supermarket owner in the province of Lomas de Zamora exploded into a six-day boycott of Chinese supermarkets throughout the Greater Buenos Aires area. Other than miscommunication arising from the language barrier, the origin of the fight remains obscure. According to authorities, the altercation allegedly ended with the owner shooting the driver and eventually spawned protests that culminated in a supermarket boycott led by the truckers’ union. While the boycott lasted only six days, the resulting discrimination against the Chinese population continues to linger.

Even if the owner were guilty, the xenophobia that transpired against Chinese-Argentines was not warranted. The owner carried a gun to protect himself, a common practice among the Chinese following Argentina’s disastrous economic breakdown in 2001.  During the crisis, they were unfairly and outrageously made into the scapegoats of society, accused of “taking advantage of the ailing economy.”  They were helplessly attacked by looters who rummaged through their supermarkets stealing countless goods, while the police turned a blind eye and blamed the Chinese mafia for the crimes.

The discrimination against Chinese immigrants is partially due to the perception that Chinese supermarkets are undercutting other businesses by selling their products at lower prices. Since Chinos account for approximately 35% of the country’s supermarkets, other business-owners face fierce competition. While no discrimination can be justified, Julia Reagan, director of a documentary entitled, “ArgenChinos,” explains that Argentines are concerned that the Chinese immigrated to the country with the sole intention of reaping profits from their businesses. To Argentines, economic integration is not enough to achieve full social integration. They are offended by the Chinese who, in their opinion, are unwilling to fully embrace Argentine culture. However, while many Chinese-Argentines passionately hold on to their own cultural particularities, it cannot be generalized that they refuse cultural integration. It is unfair to expect earlier generations to abandon their heritage and merge completely with the predominantly European culture in Argentina.

Despite points of contention, there is still hope that social relations will improve. Most of recent Chinese immigrants are students who recognize the importance of Spanish and help bridge the communication gap between Argentines of European and Chinese descent.  Pablo Chu, a Chinese student interviewed about the subject, asserts that there is much to be gained from learning Spanish, adding that “When I go back [to China], I will be one of the few who can speak Spanish.” For the Chinese, selling and producing goods requires efficient communication with their Spanish-speaking Argentine partners. By achieving proficiency in both languages, the two groups are more likely to overcome the cultural barriers that trigger unnecessary disputes like the events of June 2006.

It is unjust to victimize the entire Argentine-Chinese population and to expect them to fully adopt a national identity that does not closely resemble their own. In time, Chinese-Argentines could assimilate into mainstream Argentine culture, perhaps forging an even richer national identity. The desire among Argentines and Chinese-Argentines to learn each other’s native language is an important step in eliminating the language barrier. Though Chinese immigrants are not always socially accepted in a sometimes xenophobic society, there is no denying that their significant presence provides economic and cultural promises for the country’s future.

This is the first part in a series that will cover immigration throughout the hemisphere from a variety of different perspectives.