President Hugo Chávez has long desired to minimize his country’s economic dependence on the United States, and since China’s huge and growing energy demands have resulted in expanded business with Venezuela, he may very well get his wish. Beijing and Caracas have a history of affable diplomatic ties, which in recent years have been strengthened by several multibillion-dollar oil-exploration deals that are providing China with a broadening spectrum of new sources of energy while helping to revive Venezuela’s wilting economy. With its petroleum consumption climbing 7.5 percent per year, China represents a significant and growing long-term source of income for Venezuela.[1] While Washington continues to fulfill the bulk of its energy requirements through long-established sources in the Middle East, China could be said to have jumped the fence into the U.S.’ ‘backyard’ in an attempt to capitalize on the impressive inventory of natural resources that the region has to offer. The state of Sino-Venezuelan petro-relations represents an evolving global order reflected by the waning influence of the U.S. in Latin America and the growing power of extra-hemispheric nations in the region.

As of July 2011, Venezuela boasts the largest oil reserves in the world.[2] The oil sector represents the economic lifeblood of Venezuela; the industry’s revenue, earned primarily by means of the state-owned Petróleos de Venezuela S.A. (PDVSA), accounts for over ninety-two percent of the nation’s income, which is equivalent to one-third of its GDP.[3] The legendary profitability of PDVSA has enabled the Chávez administration to make use of the company as a political device, while using its large-scale earnings to finance social programs that have been of distinct value to the government’s ideological desiderata. However, Venezuela’s oil sector, and PDVSA’s production in particular, are not as robust as they were in years past. Beginning in 1999 when Chávez first assumed the presidency, yields from PDVSA-operated oil fields rapidly declined. This downturn was due in part to the normal effects of long-term extensive extraction, but was also partially attributed to excessive government meddling in the state corporation’s affairs, poor maintenance of extraction sites, company corruption, and the repercussions of using corporate profits to fund government-implemented programs.[4] The Venezuelan economy’s deep dependence on the oil sector has made the country highly vulnerable to dips in the commodity’s value. The steep decline in oil prices during the latter half of the 1980s damaged the economy while revealing a greater degree of social inequality than was previously visible, as evidenced by the dramatic growth of Venezuela’s informal sector in compensation.[5] In another blow to the economy, the price of oil again fell in 2008, causing PDVSA’s debt to climb forty-two percent the following year.[6] 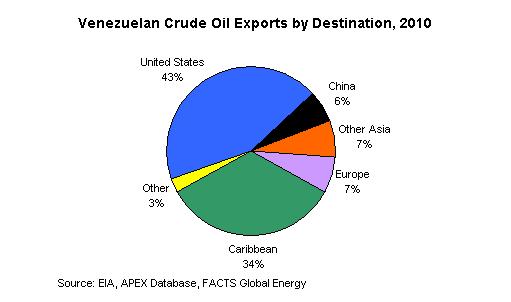 Although the industry has faced severe setbacks in production, exploration, and safety improvements, Venezuela is still one of the most reliable suppliers of oil to the U.S. market, exporting forty-three percent of its yields to refineries along the Gulf Coast (see chart).[7] In light of their troubled bilateral relationship, however, Chávez has carried out a vehement anti-U.S. stance, citing Washington’s overreaching interventionist policies as a threat to Latin American sovereignty. During a political assembly held in 2010, Chávez declared that “the Yankee empire has no limit to its manipulation.”[8] For this reason Caracas is eager to foment commercial ties with other oil-importing nations that it views as less threatening to Latin America’s internal affairs.

In recognition of its deep reliance on the U.S. as an importer of oil, Venezuela, which has made no secret of its desire to break out of such dependence, has focused on expanding its clientele to include other top consumers. China’s enormous energy needs and its ongoing quest to secure new sources for its gargantuan consumption of commodities have not gone unnoticed by Chávez, who commented that “China, the world’s second-biggest oil user, needs energy security and we’re here to provide them with all the oil they need.”[9]

In February 2009, Caracas secured USD 8 billion from Beijing as a contribution to a joint investment project aimed at expanding oil exports to the Middle Kingdom and in April 2010 acquired a USD 20 billion line of credit to encourage greater oil exploration in Venezuela.[10] The success of these joint ventures shows that China thus far has proven to be a worthy business partner; from 2005 to 2010, Venezuelan exports to Chinese oil refineries increased by more than three hundred percent.[11] Chávez certainly has been pleased with the beneficial nature of his country’s business with Beijing, especially since it has allowed him to reduce its economic reliance on the U.S. The Venezuelan President remarked, “we have been producing and exporting oil for more than 100 years but they have been years of dependence on the United States. Now we are free and we make our resources available to the great country of China.”[12] China’s investment in Venezuela presently totals approximately USD 28 billion.[13]

Developing Chinese economic ties is particularly attractive to Chávez for two key reasons. The first is that the process of rapid industrialization has endowed China with one of the fastest developing economies in the world as well as a substantial amount of financial capital. Added to this are soaring energy needs that are projected to increase one hundred and fifty percent by 2020; Caracas stands to profit greatly from this high demand.[14] China’s other main appeal is its cool detachment from the domestic affairs of other nations outside of the commercial realm, which permits it to conduct business free of the moral constraints that restrict much of the free world. Unlike the U.S., China does not have a history of intervention in the Western hemisphere, nor does it have the obligation to maintain its self-assigned role as a global advocate for democracy. In contrast, “China has a foreign policy which is directed toward cooperation with business, and [it] has directed that [policy] toward investment in Latin America,” commented Chairman and Chief Executive Officer Gustavo Cisneros of the Venezuelan communications and media conglomerate Organización Cisneros.[15]

Implications of the Budding Sino-Venezuelan Relationship

In recent years, there has been substantial progress in Sino-Latin American relations. Except in the case of pressing emergencies, the U.S. on the other hand has done little more than reduce its sensitivity to the national interests of the region. The decrease in U.S. involvement has made room for other nations to develop mutually beneficial economic links with commodity-rich Latin American powers such as Brazil and Venezuela. To that effect, Benjamin N. Narváez of the Ph.D. program in the Department of History at the University of Texas at Austin notes that “China has become critical to economic development in a number of Latin American countries.”[16] Indeed, Beijing’s trade volume with the region has increased from USD 1.8 billion in 1990 to USD 7.2 billion in 2009.[17]

Although its business ventures and abounding wealth have placed it on the fast track for economic advancement, China, like most nations in Latin America, is still considered a developing country. This supposed commonality of interests affords both sides the opportunity to conduct mutually beneficial trade arrangements.[18] Equally as important, diplomatic relations between China and many countries in Latin America historically have been free of geopolitical conflicts and ideological contradictions.[19] For the moment, Beijing appears primarily to be economically driven in its policy toward Latin America, though it may adopt strategic goals once it more-decisively establishes a new and more fixed identity among the U.S.’ neighbors.

China’s growing presence in Venezuela speaks to a wider trend of extra-hemispheric actors becoming more involved in Latin America. Russia and France both have established a substantial economic presence in the region, and even India is beginning to make its mark there.[20] In contrast, the U.S. has focused most of its attention not so much on its southern neighbors but on various initiatives in the Middle East, such as military action in Iraq and Afghanistan. This is not to say that the U.S. has been slack when it comes to engaging in intra-hemispheric commerce; aside from importing oil from Venezuela and Mexico and several commodities from Colombia, it also has signed trade agreements with a number of other regional countries, among them El Salvador, Peru, and Guatemala, and has proposed free trade agreements with Colombia and Panama, not to mention its major trading partner, Brazil.[21] Although Beijing is fast becoming an economic force to be reckoned with, it has yet to vocalize any desire to overtake the U.S. as the globe’s sole super hegemon, given the high diplomatic and economic costs of such a lofty role.[22]

For better or worse, China possesses a distinct advantage over the U.S. in international commerce that stems from its strong belief in state solidarity with respect to its economic partners. While the U.S. historically has been deemed a bastion of democracy and human rights, China has lacked anything resembling “human rights and environmental restrictions,” which “makes it an easier commercial partner as compared to the United States and Europe.”[23] As a firm supporter of state sovereignty, China does not concern itself nearly as heavily as the U.S. does with the domestic affairs of its trading partners; instead, its “interests appear to be purely commercial.”[24] To be sure, China has not been completely non-interventionist in the internal affairs of other countries, as evidenced by its participation in the Korean War and several Cold War conflicts, as well as the more recent United Nations-sanctioned humanitarian initiatives in Somalia.[25] What sets China’s interventionist track record apart, however, is that Beijing has not comprehensively used its commercial ventures in Latin America as a pretext for pushing an explicit ideological agenda as the U.S. repeatedly has been accused of doing. In the words of Dr. Peng Yuan, “we export computers, but we don’t export ideology.”[26]

Despite a Booming Economy, Human Rights Still an Issue

Since becoming a key player in the international arena, the world, including Latin America, has had to turn its attention not only to China’s positive attributes, but also to its flaws. Its economic success has brought into stark relief China’s abysmal record of human rights violations, a sensitive subject for the tightly-controlled, heavily-censored state. Now a global force thanks to its roaring economy, Beijing must be held to a higher level of accountability regarding human rights. It would be unrealistic to expect countries to cut highly-profitable business ties with China on the basis of its human rights offenses alone, as the implementation of such action would be economically detrimental at various levels. However, if there is to be any progress on this issue, Latin American democracies must at the very least increase diplomatic pressure and more earnestly condemn incidents of China’s infringement on human rights.

The increasing attention Latin America is receiving from China proves that the region now has a viable alternative to the U.S. as a primary trading partner. This notion gives it a unique opportunity to escape the shadow of the U.S while at the same time redefining its role in the international sphere. Latin American countries are incrementally restructuring the global order as they continue to open their doors to worldwide business opportunities. Warm economic relations with China have not only bolstered the economic influence of all concerned, but also have sent a message to the U.S. that the new era of international relations is inconsistent with exclusive global eminence.

This analysis was prepared by COHA Research Associate Lauren Paverman.

To read more from COHA on the U.S. and Venezuela, click here.