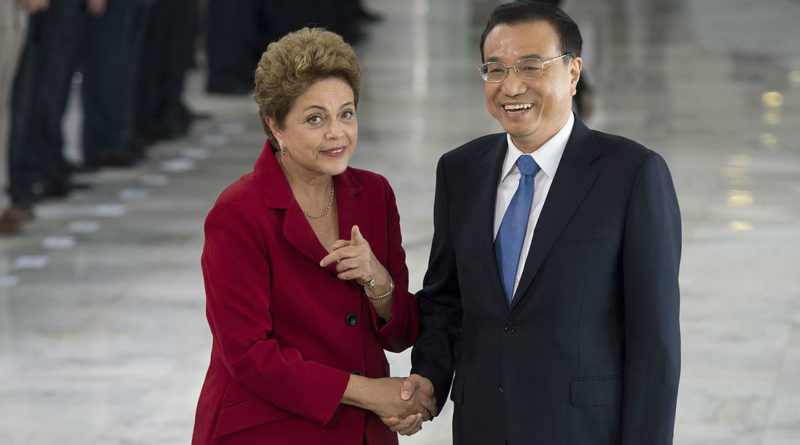 China has the largest economy in the world, larger than France, Germany, and Italy combined. By 2025 the Chinese economy should be 60 percent larger than that of the United States.1

The emergence of China is representing a significant change in the distribution of global economic might, one that started in 1978 when China launched a grand economic transformation, adopting key elements of capitalism. China then pushed outward in the 1990s, pursuing markets beyond those of its East Asian neighbors. These initiatives brought extraordinary growth to the Chinese economy. For over three decades, from the late 1970s to the world economic crisis of 2008-2009, China grew at 10 percent or more a year, one of the longest and fastest rates of growth the world has ever seen.2

The restructuring to the Chinese economy generated a dramatic increase in its overall demand. With over 20 percent of the world’s population but only 8 percent of the arable land, China needed to import food. Moreover, as researcher Rhys Jenkins has noted, “resource constraints really began to bite in China at the end of the 1990s,” as the nation’s booming industrialization created significant input bottlenecks.3 China required massive imports of base metals and fuel to feed its growing industries. As Shanghai researcher Liu Yongtao has put it, China needed “more and more raw materials, … iron ore, copper, oil, gas, beans, corn, timber,” and much more.4

Responding to Demand from China

China imports 40 percent of global production of soybeans, taking 75 percent of its supplies from Brazil and Argentina. China buys a third of the iron ore sold on world markets and a fifth of the copper, with much coming from Latin America. Responding to the rising demand, between 2000 and 2013 Latin America’s trade with China rose 27 percent a year, a time when the region’s trade with the world grew just 9 percent a year. In these years trade with China increased 22 times over; with the world, just three times over. China is today Latin America’s second largest export market, after the United States.5

Brazil is China’s largest trade partner in Latin America, with China accounting for over 40 percent of Brazilian exports and imports. Brazil sends chiefly iron ore and soybeans, which together comprise 70 percent of their exports to China. Beyond Brazil, Argentina sends soybeans; Venezuela, oil; Chile, copper; and Perú ships copper and fishmeal. The China connection is principally with South America, not with Central America or the Caribbean, the result of the geography of natural resource distribution. China is now the main recipient of exports from Brazil, Chile, and Perú, and the seconding leading destination for exports from Argentina and Venezuela. From 2000 to 2013 Latin American exports to China increased 25 fold, hitting nearly $100 billion USD a year. While China’s trade with Latin America has increased, the U.S. is still more important. In 2010 the U.S. took 41 percent of Latin America’s exports; China 8 percent. In 2010 the U.S. supplied 31 percent of Latin America’s imports; China, 13 percent.6

Answering China’s call for raw materials, Latin America’s total exports rose 17 percent a year from 2004 to 2008, fell off in 2009 during the global economic crisis, and then grew again at 25 percent a year in 2010 and 2011. Indeed, it was the trade with China which helped save some of the Latin American region from the 2008-2009 global recession, a time when exports to the U.S. and the European Union fell off sharply.7

In 2013 Latin America supplied 7 percent of China’s imports, up from 2 percent in 2000. This is a significant increase, to be sure, but still these shipments still make up just a sliver of China’s total imports. The trade relationship is asymmetrical: China matters to Latin America, but the reserve is not really the case. Brazil is still only China’s ninth most important source of imports overall. For all the shipments of crude from Venezuela, much of it peddled by China on the re-export market, Latin America is not a key source of oil for China. China’s export trade is even more lopsided. As researcher Rhys Jenkins has noted, “China’s exports to the USA, Europe and the rest of Asia are far more significant than its exports to Latin America.”8

The China trade has led to another issue. Latin America is re-becoming a raw material exporter to the world, and the reason is China. In the late 1990s only about one-quarter of Latin America’s total exports were of primary products. Today nearly half of the region’s exports are of primary goods. Driven by demand from China, world prices for mining products tripled on world markets from 2000 to 2010. Such primary product exports are far less significant in Latin American shipments to the rest of the world.9

In a return to the classic dependency pattern, Latin America ships raw materials, and China sends back, in a smaller stream, finished products, from cell phones, laptops, textiles, shoes, and a wide array of various low-tech, low-cost manufactured items. Already by 2004 complaints were coming from Brazil and Argentina about Chinese dumping of cheap industrial products into their markets, and Mexico was complaining about illegal smuggling of goods from China into their nation.10

For Latin America the problem is not just that these economic arrangements can leave it trapped in third world-style primary product production. Raw material production generates fewer jobs when compared to other industries. When Chinese firms do open up in Latin America, and this is also beginning to happen more and more, they usually bring in their own work crews, hiring very few local workers, and least of all at the mid-level management level.11

Even China admits that the present trade pattern is not good for Latin America in the long run. As Chinese President Xi Jinping noted at a summit meeting in 2014, “the development modality resulting from economic growth driven principally by … natural resource … [export] is not sustainable… [It is] a dead-end street.”12 China’s giant strides toward industrialization, and Latin America’s retreat in this regard, may carry another cost. Researchers Kevin Gallagher and Roberto Porzecanski have argued that with China now more economically developed, there may be less room for Latin America to push into global markets, should it return to industrialization.13 Falling behind again in the race for economic development may not be good for the long term health of the Latin American economies. There is a cost to bear in this raw material export opportunity.

After growing at a double digit clip for several decades, in 2009 Chinese economic growth slowed to 9.1 percent, and has cooled off even more since then. In 2014 the Chinese economy grew at 7.4 percent, its worst performance in a quarter century. The Economic Commission for Latin America and the Caribbean predicts it will grow at 7 percent this year, and at between 7 and 6 percent a year until 2020. As a sign of things to come, in 2014 trade between China and Latin America dropped 2 percent over 2013.14

As demand from China has fallen off, the prices fetched for key Latin American raw material exports, such as oil and copper, have sagged. These changes have had dire implications for Latin America. The world economy grew at an average annual rate of 5.1 percent a year from 2003 to 2007, falling to only 3.6 percent a year from 2011 to 2014, and in the latter period, Latin America had the slowest growth rate, at 3.1 percent, of all developing regions. Latin America’s total growth slowed to 1.1 percent in 2014, and it should do no better this year. Those Latin American nations most linked to China have suffered the most; those with the weakest links to China–Mexico, Central America, the Caribbean–have been harmed the least. As the China trade slows, Mexico, whose economy is still more linked to the United States, will outgrow most nations in the region, and Bolivia, selling essential fuel to Brazil and Argentina but nearly nothing to China, will be among the fastest growers.15

When the boom began little Chinese direct investment traveled to the nations of Latin America, save for some mining operations in Ecuador and Perú. Since 2010, however, more Chinese investment in Latin America has been flowing to Brazil and Perú. This year China created a $5 billion USD developmental reserve, the China-Celac Cooperation Fund (Celac or the Comunidad de Estados Latinoamericanos y Caribeños, The Community of Latin American and Caribbean States). China is now the largest source of international credit lines for Ecuador, Venezuela, and Argentina. China’s economic developmental banks today invest more in Latin America than do the World Bank and the Inter-American Development Bank.16

China has entered into several free trade agreements in the region, with Chile in 2006, Perú in 2010, and Costa Rica in 2011. China is also the leading partner in the New Development Bank, formed in 2014 by the Brics nations as an alternative to the International Monetary Fund. Chinese president Xi Jinping met with Latin American leaders at a summit in Brasilia in July 2014 and subsequently inked an accord, the Cooperation Plan, with Celac, with the goal of increasing Latin American industrial processing of its own raw materials.17

China is swiftly moving into to position to replace the U.S. as Latin America’s leading export destination, and China seems far less determined to press for the lowest conceivable price level for raw materials.18 Unlike the U.S., there is no evident political or policy conditionality for Chinese trade, loans, or grants. As the Chinese Ministry of Foreign Aid put it, “although China’s aid is limited, it is provided sincerely and without any conditions attached.”19 At a time when the U.S. severed ties and harshly critiqued Venezuela’s Hugo Chávez and Bolivia’s Evo Morales, both leaders traveled to China for official state visits.20

The one condition that might have been imposed by China, non-recognition of Taiwan, has not really been a factor. Globally some twenty-three nations recognize Taiwan and not China, and twelve of these are in Latin America. Other than Paraguay, all are in the Caribbean and Central America. Ties with Taiwan are driven these days less by contempt for communism than by the very generous aid packages being offered up by Taipei. Yet even though Paraguay and Panamá still recognize Taiwan, each still obtains a significant portion of their imports from China.21

The emergence of a more capitalist-oriented China, one committed to free trade and growth, allowed many South American states to flourish economically in recent decades, albeit in a developmentally problematical and environmentally unsustainable manner. There was something of a major coincidence in this, for the boom in the China trade coincided with the rise of the left across much of Latin America. The resulting surge in commodity prices has been fortuitous for progressive governance, allowing the anti-capitalist left to enjoy economic good times.

Previously, Latin American neoliberalism in the 1980s and 1990s championed increased globalization, including more trade with China. If would be fair to conclude that this rising commerce with China was at least in part the product of neoliberalism’s embrace of global trade. To be sure, rising copper prices helped the right of center, free market-oriented governments in Chile and Perú, but soy and iron ore profits poured into center-left Brazil, the soy trade buoyed the left-wing nations of Uruguay, Paraguay, and Argentina, and spiking oil prices benefitted the hard-left nations of Venezuela and Ecuador.22 Without the China-led commodity price rise, the left in Latin America would surely have suffered at the polls. Ironically, it has been Chinese free trade capitalism that has helped to raise the fortunes of the Latin American anti-capitalist left. But as the China trade ebbs and export revenues dry up, hard times may lie ahead for the commodity export-dependent governments of the Latin American left.