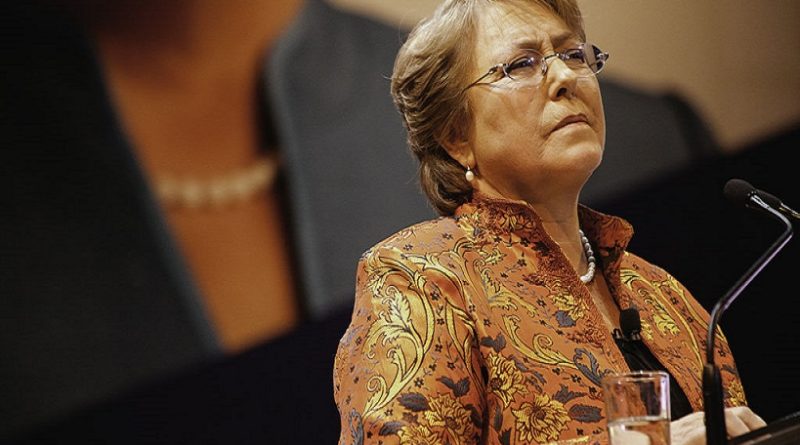 Chile has recently transitioned back to democracy after the military dictatorship of Agosto Pinochet, which began in 1973 and lasted until 1990. His regime was characterized by horrendous human rights abuses and disappearances of political opponents, primarily of the Chilean left. In 1988, under mounting international pressure, Pinochet held a referendum on whether to stage national elections or if his regime would remain in power. His government lost the popular referendum, propelling the country forward into electoral democracy.

Two coalitions arose in the first election cycle after the demise of the Pinochet regime: one on the left and the other on the right. These coalitions have since evolved to include new parties, for example, Nueva Mayoría (New Majority established in 2013), the current leftist coalition, includes the Communist Party of Chile, which was not included in the earlier leftist coalition of Concertación.[i] On the right currently stands the coalition Chile Vamos (Let’s Go Chile, established in 2015). The Chilean left is historically associated with those who opposed Pinochet retaining power and on the right those who supported Pinochet, although, again, the new coalitions are not identical to their predecessors. One must note that each coalition is composed of several parties and consensus among coalition members is not guaranteed. This typifies the upcoming president elections.

Chile is currently entering primaries in July; the presidential election will be in November of 2017. Chileans are largely discontent with President Michelle Bachelet’s most recent term in office, and her approval rating now stands at 31 percent, compared to an approval of 47 percent in October of 2014.[ii],[iii] Bachelet belongs to the Nueva Mayoría coalition, which may bode poorly for its chances in the upcoming election (Bachelet is unable to run in this election since Chile’s electoral system does not allow for immediate reelection).

More problematically, Chile’s left coalition has been unable to agree on a candidate for the election. One of the coalition’s parties, the Christian Democrats, has decided it will not participate in the upcoming primaries, instead presenting its own candidate, Carolina Goic, directly in the presidential election.[iv] As things stand, Alejandro Guillier, a news anchor and senator of the Radical Social Democratic party, is likely to represent the rest of the Nueva Mayoría coalition.[v] His policies would likely build upon those of Bachelet, particularly on increased education spending, abortion rights, and protections for indigenous peoples.[vi] Guillier has also called for environmental reform, an issue that severely harmed Bachelet’s approval ratings, as much of the public felt her response to forest fires earlier this year was poorly handled.[vii]

Since the country’s democratic transition, the Concertación coalition, and now Nueva Mayoría, has dominated the presidency with only one exception. From 2011 to 2014, Sebastian Piñera held the office, serving between terms of Bachelet. Piñera was elected as a member of the Renovación Nacional (National Renewal Party).  Piñera is a prominent businessman in Chile, with a net worth of about $1 billion.[viii] He has declared that he would like to overturn many of Bachelet’s reforms including education, tax, and labor policies. His supporters believe he will be able to propel the economy forward, and he has proposed new infrastructure spending and modifications to Chile’s prominent copper industry.[ix]

During Piñera’s term, there were frequent protests by students demanding education reform.[x] Bachelet’s government implemented programs to make education more affordable for low-income families, benefiting 170,000 students in 2016.[xi] However, Chilean students insist that these measures do not solve the issues of high costs and high interest on student loans.[xii] Should Piñera win the presidency this November, there is little chance that these obstacles will be effectively addressed. Of course, these types of protests have not been uncommon during Bachelet’s term, but protests would likely increase were Piñera to overturn progress made under Bachelet. He may be of benefit to big business interests, but may also prove harmful to the public sector, particularly for education.

Many of the divisions on the left have arisen because some parties are more centrist while others are more progressive. Center-left parties in the coalition, such as Goic’s Christian Democrats, are typically more conservative on social issues. For example, Christian Democrats favor tight government regulation on abortion. Abortion has recently become a national issue in Chile with President Bachelet’s proposal to reform to abortion policy. At the moment, Chile is a nation with a complete ban on abortion.  The reforms Bachelet has pushed for are still strict, allowing abortions only in cases of rape or a significant health threat to the mother in the first 12 weeks.[xiii] While the Catholic nature of the country has prevented decriminalization of abortion, there is some hope, as abortion was legal before the Pinochet regime, and it is the dictatorship that was so staunchly against providing the possibility of abortion.[xiv] Of course, while decriminalizing abortion is a significant advancement for women’s rights, this issue puts centrist political segments of the coalition at risk. Therefore, the left must decide if dividing itself and breaking apart from the coalition is necessary for progress. However, the structure of Chile’s electoral system up until now has not made truly plausible more than two coalitions.

The structure of assigning legislative seats explainsy two coalitions have persisted for so long in the nation. Chile has a bicameral legislature composed of a 38-member Senate and a 120-member Chamber of Deputies.  Chile has 19 regions for the election of senators and 60 regions for the election of deputies.[xv] Nueva Mayoría currently possesses the majority in the Senate[xvi] as well as the majority in the Chamber of Deputies.[xvii] While the right coalition does not hold a majority, it does have a greater influence than it might have under a different electoral system. As the Ace Project explains, “This electoral system is unique because in practice it favors the largest minority, not the majority.”[xviii] Coalitions have been necessary to gain a seat. In either legislature (as the number of elected legislators is two for a region), a list needs 33.4 percent of the vote for a seat, and to gain both seats, the list needs 66.7 percent.[xix] This enormous threshold means that often the left coalition will gain one seat and the right coalition the other. There are also instances of independents winning a seat, causing a distortion in Nueva Mayoría’s majority, but overall this system creates more seats for the right-wing Chile Vamos than might otherwise be elected.

Bachelet’s government with legislative majorities in 2015 approved electoral reform that would allow smaller parties to potentially gain seats as well as change the number of seats that are possible, bringing the Chamber of Deputies to 155 members and the Senate to 50 members.[xx] In implementation, many argue this will benefit the parties of Nueva Mayoría, because it will alter the way in which the 33.4% and 66.7% thresholds allow Chile Vamos to obtain a greater number of seats than another system might allow. Therefore, this reform has been opposed by Chile Vamos, which has concerns it would hold fewer seats in the legislature and have less political significance.  It is very possible that the right’s candidate, Piñera, would push to overturn the increase in legislative positions should he be elected.[xxi]

Many Chilean voters are still undecided. A May 2017 poll by Adimark found 25 percent would vote for Piñera, 21 percent would vote for Guillier, 3 percent would vote for Goic, and 26 percent would not know their choice among the candidates available.[xxii] If no candidate achieves an absolute majority (above 50 percent), then a runoff election will occur a month later.[xxiii] A runoff election could potentially bring the left back to power should it successfully unite to back a single candidate, but it would be a scramble, as there is only a month between voting rounds. The left needs to appeal to independent voters, emphasizing Piñera’s track record of private interests over the interests of the public. It should also stress how the left’s electoral reforms will create more opportunities for independents and smaller parties in the future. If the left holds onto the presidency, then it can further develop this electoral reform, benefiting individual parties and decreasing the prominence of the coalition structure. This structure inherently allows right wing interests a larger influence than would be indicated by a popular vote. Hopefully, Chile’s left can win the election and can build upon recent electoral reforms to create a more representative democracy.

[xi] O’Boyle, Brendan, “Free College in Chile! So What Are Students So Mad About?” America’s Quarterly, January 28, 2016, http://www.americasquarterly.org/content/free-education-frustration-chiles-student-activists.