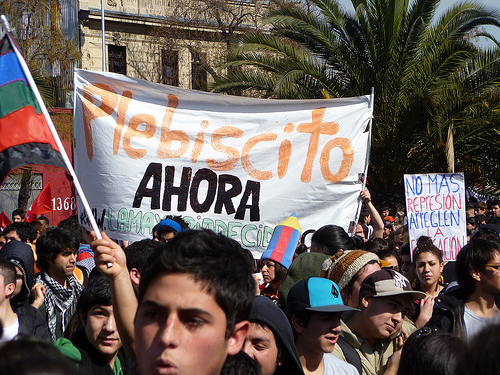 Against all odds, Chilean students commemorated the one-year anniversary of their uprising on June 28 with a national strike and an estimated 100,000- to 150,000-person march through downtown Santiago. Though many observers speculated that the movement had begun to spatter over the summer break, a second Chilean winter appears to be heating up. Over the past few weeks, students have taken to the streets of Santiago in the first organized demonstrations since the summer break. More recently, students took over the Universidad del Mar, a university exemplifying the corruption against which the students protest. In a meeting of FECH (Federation of Students of the University of Chile) leaders this June in Antofagasta, Chile, student-leaders railed against fraudulent activities practiced by Universidad del Mar administrators, hailing the institution as a prime example of the profiteering and abuses in the education system, and renewed their vow not to stand down until they achieve “free and quality education.”

This milestone of one of the most influential and sustained protests in Latin America in recent years invites a reflection upon the movement’s roots, its development, and its implications for Chilean society. At this anniversary, however, popular discontent no longer belongs solely to the students. Though the movement began as an outcry against rampant profiteering in the Chilean higher education system, it quickly developed into a widespread demonstration against general socio-economic inequity and neoliberal values that characterize contemporary Chile. As a result, the conservative Piñera government has come under fire in what many involved in the movement see as a last stand against the neoliberal legacies of the Augusto Pinochet era.

Lingering painful memories of the brutal Pinochet dictatorship of the 1970s and 1980s and deep-seeded resentment for its policies have fueled the widespread support for the social movement among the general population. Following the CIA-backed coup that ousted the democratically elected Salvador Allende government in 1973, Pinochet and his cohorts constructed a new constitution and a number of neoliberal reforms with the help of conservative economists from the University of Chicago. The 1980 constitution and many other Pinochet-era polities survived the dictator’s downfall and still stand today. Chief among these reforms was the privatization of major universities and education, which resulted in an exponential increase in the number of universities and other institutions of post-secondary education, while the overall quality plummeted due to insufficient funding.

The educational system, as it stands today, remains a relic of the Pinochet era, disproportionately favoring the wealthy. Meanwhile, less fortunate students and their families must make the unfortunate choice between a job that does not require a degree and decades of inundation by loans. The loans hardly come with guaranteed payoffs, as poorly trained students flood job markets not necessarily capable of accommodating them. Further, aside from causing massive financial burdens on students, this misappropriation of funds also provides few incentives for talented professors to remain in the system; therefore, the quality of education suffers. Demonstrative of this lack of investment in higher education is Chile’s per-student spending, lagging behind the OECD average of $7,525 USD at only $2,694.(1)

The businessmen who own Chile’s all-too numerous for-profit universities and training institutes unfairly and arbitrarily set tuition and fees, yet almost never reinvest profits into the institutions. A commission of deputies recently uncovered unethical financial practices in seven Chilean universities, including the aforementioned Universidad del Mar. Among the many abuses encountered during the inquiry, investigators found that these administrators profited from outsourcing school services to other private companies that they or their family members own. Many officials, for example, have ties to real estate companies from which the universities rent their land. The commission also found instances of administrators receiving disproportionately high salaries and evidence of nepotism.(2)

Vast socioeconomic inequalities parallel those of Chile’s education system. Following the collapse of the Pinochet regime, Chile has consistently been hailed as an exemplar of economic and sometimes democratic success. The “Chilean Miracle,” however, came at a heavy price, and only at the expense of the Andean nation’s poorest. In fact, during the more than decade-long governance of the center-left Concertación Coalition, the so-called representative government did little to change many Pinochet-era policies. Throughout the 1990s and 2000s, Concertación, though far more democratic than its predecessor, governed under the auspices of the intrinsically undemocratic Pinochet constitution while also maintaining the dictator’s economic model, based on the privatization of essentially every service imaginable, including utilities and education. Though this has led to significant macroeconomic growth, many Chileans have not seen the benefits as the country, as Gabriel Boric put it last week during the strike, has moved “from a military dictatorship to a market dictatorship.”(3) With a Gini index of .50, Chile ranks among the world’s most unequal countries, according to the Organisation for Economic Co-operation and Development (OECD). Aside from the vast discrepancies in salaries, the OECD also reports that Chile holds the third-highest level of relative poverty, and about 38 percent of Chilean citizens report that it is extremely difficult to live off their current incomes.

In recent years, the election of the Piñera administration, the first conservative government since the Pinochet-era, has only exacerbated tensions stemming from vast disparities in income levels. Comprising much of the administration are former private-sector elites, many of whom directly benefited from the privatization processes of the 1980s and 1990s. Piñera himself ranks among the wealthiest individuals in the country, even after selling his shares of the major airline LAN and other key assets. As a result of this discrepancy between president and populace, as well as the exigent demands of the students, 70 percent of the population has declared support for the movement and FECH. Meanwhile, Piñera’s export-driven, neoliberal economic strategy conjures up disturbing memories for many Chileans of the Pinochet years, providing all the more reason to join the student calls for justice and reform.

Income discrepancies and export-driven economic practices that exacerbate those differences are not the only reasons for growing support of the student movement. In a few of the 40 marches during the last year, violence erupted and Chilean forces brutally cracked down on the generally peaceful protests and denounced the students as radicals. Authorities have employed water cannons, teargas, and other heavy-handed methods to control the crowds with such intensity that the Inter-American Commission on Human Rights issued a statement denouncing police violence and urging the government to respect rights to assembly. Many sources in Chile report that the carabineros (uniformed Chilean national police force), in an attempt to radicalize and discredit the protesters, have made use of infiltrados (agents provocateurs) and employed flaytes (young, violent punks). This type of heavy-handed crowd control and excessive use of force by the police parallels similar tactics employed by the Pinochet government. Yet, in spite of government attempts to discredit the students, the movement itself has gained broad support within the general population.

Riding the wave of discontent sparked by the students, other groups such as the Mapuche (an indigenous tribe in Southern Chile), secondary-school students, and trade union members have begun mobilizing not just against the education system, but other fundamental problems plaguing Chilean society. As a result, the Chilean political landscape appears fundamentally distinct from the one when Piñera first took office in 2010. Last summer, for example, the Trade Union Congress demanded basal alterations to the neoliberal economic model, while copper miners went on strike demanding increased benefits and better working conditions.(4) Due to of the government’s unnecessarily harsh response to peaceful demonstrations and increasing outspokenness of previously quiescent social and economic groups, Piñera’s approval rating has plummeted to an astonishingly low 24 percent.(5)

Facing levels of unpopularity unseen since the Pinochet years, the Piñera administration finally found occasion to make a few attempts at reform. To give students from poorer backgrounds a fair chance at admission into better schools and universities, some of these recently announced that they would consider class rank, in addition to standardized tests, as factors in the admissions process. The government also proposed adjustments to student loan interest rates with the aim of easing the financial strain of obtaining an education. These reforms, though steps in the right direction, ultimately failed to address the fundamental problem with the Chilean university system: that many of its institutions operate not to benefit the students, but for the profit of their owners and those in the private sector. The administration, however, has ultimately aligned itself with the education tycoons and business interests, with Piñera even going so far as to label education as “a commodity.”

In spite of Piñera’s unpopularity, the Concertación coalition surprisingly maintains en equally dismal approval rating of 21 percent among the general population.(6) Meanwhile, the students by and large refrain from aligning with a political party, making the movement’s potential effects on the 2013 elections all the more unpredictable. Yet, undeniably, events in the past year have transformed the Chilean political landscape. The protests have empowered a new generation of leaders, such as Camila Vallejo and Gabriel Boric, while also inciting contentious mobilization across the country at levels unseen since the end of the 1980s. No longer a quiescent population, many Chileans have joined student demands for fundamental reforms to the enduring Pinochet-era legal code and decried the policies of the current government. The hundreds of strikes and protests of the past year encompass groups of all generations and occupations, while spanning a broad range of issues. High school students, parents, and professors have voiced support for student demands, while the indigenous peoples like the Mapuche have mobilized against their chronic marginalization and other groups have protested energy development projects that threaten to devastate the environment. If the students manage to consolidate their widespread support and the diverse voices mobilizing against the government into a solid voting block, they may finally have the opportunity to transform their talk into action and institute the change they seek.