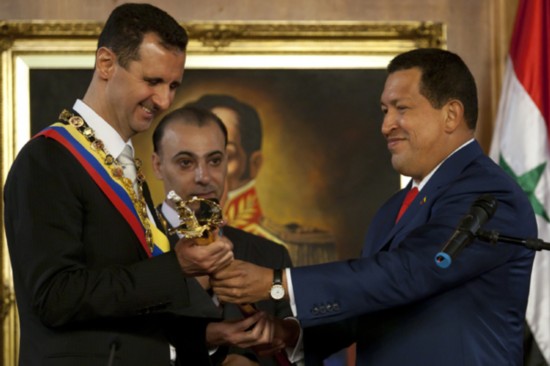 As a strong supporter of the Assad regime, Venezuela has prioritized the growth of the Bolivarian Alliance for the Americas (ALBA) over halting Bashar al-Assad’s human rights derelictions against the Syrian population. By upholding trade ties with Damascus in the face of international sanctions, Caracas has thus heavily invested itself in Syrian domestic politics and disregarded the thousands of innocent victims who have lost their lives. Although Venezuelan President Hugo Chavéz constantly has blamed U.S. imperialism and profiteering for global crises, Chavez has no issue developing relations with the Assad regime, a partnership born out of economic pragmatism with little respect for the wellbeing of the Syrian populace.

Chavéz initiated trade relations with Assad in 2010, during his tour of Washington’s critics in the Middle East. During his stay in Damascus, Chavéz pushed the expansion of the newly formulated ALBA’s doctrine: free trade without American domination. The visit culminated with the signing of bilateral trade agreements with Assad, thereby locking Caracas into a mutually beneficial partnership with Damascus. Regarding trade, Venezuela has provided Syria with millions of barrels of diesel fuel and assistance in the construction of an oil refinery. Syria has held up its end of the deal by officially observing the ALBA alliance as well as exporting olive oil and naphtha, a refined petroleum product, to Venezuela.[i]

When the Syrian conflict heated up, there  was no doubt that Chavez would reinforce the trade alliance, not just for the continuation of his anti-imperialism and Western rhetoric, but also for the economic profit that would be reaped through the alliance.  ALBA’s official statements regarding the conflict recommend that Syria handle the situation “peaceful and democratically,” but most importantly, without the interference of any international actors. The Bolivarian Alliance thereby rejected any U.N. plans for a Libya-style NATO intervention.  The Venezuelan Foreign Affairs Minister Nicolas Maduro reiterated this message, proclaiming that “Western powers” intended to “take advantage of Syria’s internal problems in order to conspire against, do damage to and destroy Syria.”[ii] ALBA, furthermore, has alleged that the international media has manipulated this situation with its typical Western bias. On this point, Venezuelan Deputy Foreign Minister Temir Porras, stated on behalf of ALBA, “the aspirations of the people of the region [reject] foreign interventions which reflect the desires of colonial powers to renew their hegemony over the resources in the region.”[iii] But, given the ongoing grievous human rights violations in Syria, ALBA’s calls for the respect of the aspirations of the Syrian people must come into question due to the organization’s explicit support of the Assad regime through trade.

Venezuela’s Stance on the Crisis

It is painfully clear that Venezuela and other ALBA members will not break ties with Syria under any circumstance. For Chavéz, the alliance aligns with his economic and political agendas to prevent the emergence of a new government backed by historically imperialist nations that would seek to control Syria, a key Middle Eastern state. For ALBA, ideological principles, economic advancement, and increasing discontent with the West have clearly trumped the otherwise deplorable human rights abuses performed by the Assad regime. By ignoring this reality, Venezuela has become complicit in the very foreign policy it decries.

By supporting the Assad regime through its trade partnership, Chavez has condemned the people of Syria to the onslaught of Assad’s mobilized military forces. On July 19, gunships fueled by Venezuelan oil contributed to the record-breaking death toll of 250 Syrians slaughtered in a single day in retaliation of the killings of three prominent members of the Assad regime.[iv] Though the strategic bombing of the Syrian military and defense leaders could be defended as necessary to expediently defuse the conflict, Chavez has directly accused Western forces for the initial attacks while condoning Assad’s retaliation.[v]

It is apparent that Venezuela and ALBA, in continuing their economic partnership with Bashar al-Assad, have not considered the aspirations of the Syrian people. Instead Chavez has prioritized Venezuela’s and other ALBA member nations’ economies.  It is important to recall that, like Syria, Chavez was a supporter of Muammar Gaddafi during the Libyan uprising and is a strong trade partner of Putin’s Russia. The hope now is that by intertwining itself with economically prosperous but often unpopular regimes, Caracas will not unduly isolate itself from the global community.