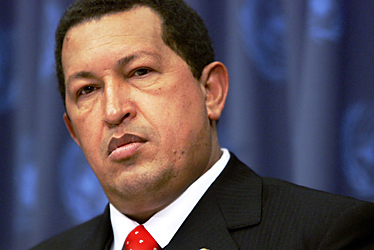 Venezuelan President Hugo Chavez will not attend the summit of trade bloc Mercosur in Brazil on Friday, which will increase concerns about his health as he prepares to begin a fourth term in January.

Brazil’s Foreign Ministry told the AFP that Chavez would not attend the summit, which will be his country’s first time since its accession as a full member was approved in July. Vice President and Foreign Minister Nicolas Maduro will represent Venezuela instead. On Monday, Brazil’s ambassador in Caracas had said that Chavez’s attendance at the summit was confirmed.

Chavez is currently in Cuba receiving treatment which he said consisted of “sessions of hyperbaric oxygenation along with physiotherapy” to “consolidate” his health after finishing radiotherapy treatment for cancer six months ago. He flew to Cuba on November 27, in a trip which caused some concern as no images were released of him leaving Venezuela or arriving on the island.

The president has not been seen in public for nearly three weeks, since November 15, and has even stopped Tweeting. The last message from his account was sent on November 1. El Nuevo Herald reports that Chavez canceled two planned engagements this week, to do a press conference by phone and to film a video in Cuba. The newspaper said that the question of whether he attended Friday’s summit would be a “proof by fire” of the true state of his health.

Maduro said on November 29 that the president was doing well in Cuba, and demanded “respect” for his health, accusing the opposition of trying to take advantage, reports Venezuela Analysis. Reuters reported that Chavez aimed to be back in the country for his inauguration on January 10, and noted that:

His latest absence has put renewed attention on Maduro, his vice president, and on Congress head Diosdado Cabello, two close and powerful allies of the president who might look to replace him if Chavez were to leave power.

Chavez’s absence from the country could hurt the chances of pro-government candidates in the December 17 gubernatorial elections, as Venezuelan Politics and Human Rights blog points out.

Hugo Perez Hernaiz and David Smilde looks at the prospects for the elections, going through the country state by state and discussing whether the governorship is expected to go to the government or opposition.
They note that many opposition supporters are disillusioned after Chavez’s victory in the October presidential elections, but that the government side is hurt by continued questions over the president’s health, and by his absence from the campaigns.

The analysis was prepared by Hannah Stone of the Pan-American American Post. Hannah Stone is also a Research Fellow at the Council on Hemispheric Affairs.