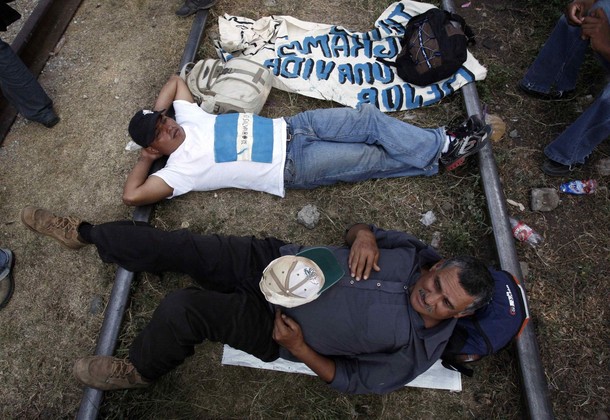 Every year, 500,000 Central Americans pass through Mexico on an invariably dangerous journey to the United States in search of better opportunities, but it is unknown how many reach their intended destination.[1] Migrants are regularly treated as second-class citizens during their journey; many fall victim to the violence of criminal gangs, resulting in assaults, sexual slavery, kidnapping, or murder. Civil society organizations often advocate the protection of migrant rights; however, in response to a wave of migrant-associated murders, the Mexican government chosen to take action. In light of the recent explosion of migrant killings, on May 25, 2011, a reform of Mexico’s Immigration Law was forced upon the government. Nevertheless, it is debatable whether or not this law reform will be enough to protect migrants.

Local authorities have not only proven unable to adequately treat migrants with respect, but have themselves, on some occasions, also been linked to criminal activities that have added to the woes of those who are desperate to enter the U.S. The Mexican weekly Proceso reported that members of the National Immigration Institute (INM) kidnapped over 120 migrants on a bus in Tamaulipas going to the U.S. Migrants of Mexican, Central American, and Chinese origin are delivered to criminal gangs who exploit them for months before selling them into some form of servitude.[2] It is no surprise then that migrants feel trapped in a situation where they are prevented from having an adequate outlet to hold human rights abuses accountable.

Because of the vulnerable status of migrants, as well as the lack of accountability of authorities, gangs regularly abuse Central American migrants. Moreover, coyotes, bus drivers, and state authorities have been allegedly involved in organized crime, resulting in further migrant mistreatment. Central Americans traveling through Mexico tend to use migratory agents, but many of those in charge of transportation systems are accomplices of human trafficking gangs.[3] Some of these agents purportedly sell migrants’ travel information to gangs, indirectly assisting in mass kidnappings. The Mexican National Commission for Human Rights (CNDH) estimated 210 cases of mass migrant kidnappings between April and September 2010, with over 11,000 victims.[4] The gang members force migrants’ families to pay a large ransom, while they continue to beat and rape their captives. If they do not pay in time or are not able to pay at all, the migrants are routinely murdered, and the women often sold to prostitution networks.[5]

, Women and children are arguably those most vulnerable to Mexican drug cartels. These groups have historically been subject to human trafficking, enslavement, and prostitution rings, regularly being beaten and raped by gang members. Drug cartels, such as the Zetas, buy Central American women from coyotes or corrupt officials. Washington Post Reporter Anne-Marie O’Connor notes that, “as organized crime and globalization have increased, Mexico has become a major destination for sex traffic, as well as a transit point and supplier of victims to the U.S.”[6] Also, many young sons of migrants are kidnapped or go missing, and only contact their families months after their disappearance to inform them that they are working for one of the cartels.[7]

Additionally, gangs force migrants to do the dirty work of the cartels. According to migrant rights activist and Roman Catholic priest, Father Alejandro Solalinde, migrants have been used as a “reserve army” by the cartels. Solalinde, who has dedicated his life to defending migrants in the Brothers and Sisters on the Road (Hermanos en el Camino) shelter, noted that the hit men first train migrants and then make them work within their own countries, or in other parts of Latin America, as they would  be killed if they refuse to cooperate.[8] Even more shocking, the cartels force the migrants to partake in sadistic forms of entertainment once the captives cease to be of use or are training to be part of the reserve armies. Migrants have been forced to fight to the death like gladiators during their “training,” bludgeoning each other with rudimentary tools such as hammers.[9] With violence expanding so gratuitously, it is clear that the situation has gotten out of control.

Grave events, notably the mass burial sites found in Tamaulipas, motivated the INM to draft a reform of Mexico’s Immigration Law on May 25. It opens up the possibility for undocumented migrants to travel through Mexico on their journey to the U.S. by creating a visitor’s status for migrants in Mexico. This visitor’s status permits migrants to stay in the country legally for a defined period of time during their travel to the north. However, while recognizing this new law as a positive step forward, political analysts have questioned its effectiveness. Rodolfo Casillas, from the Latin American Faculty of Social Sciences in Mexico (Flacso-Mexico), told BBC Mundo that “we have not been able to determine whether the efforts have been sufficient or not. I would say that not even 20 percent of what was agreed upon has been put in practice.”[13] Furthermore, Salvadoran political scientist Kirio Salgado added: “Mexico needs to control these hell-sent demons who mistreat cruelly Central American migrants.” [14]

The current situation has alarmed Central American presidents as well. Mexican President Felipe Calderón and Salvadoran President Mauricio Funes met in June, at a meeting that largely focused on the migration agenda for migrant security. Calderón also met with Guatemalan President Álvaro Colom, and their meeting followed a similar agenda. The main subject was clear: the need for immigration reform and control organized crime is urgent. Organized crime is becoming an increasingly borderless problem, and cooperation is needed to combat it and make the lives of migrants easier.

The government’s current approach to migrants is demeaning at best. The Inter-American Commission on Human Rights (IACHR) points out some alarming facts. First, migrants do not have any legal representation in Mexico. Secondly, 69,903 illegal migrants were detained by the National Migration Institute (INM) in 2010, and then jailed in precarious conditions where there is no distinction in treatment of minors and adults. Finally, these migrants are detained for long periods of time, sometimes for up to a year.[15] However, Father Solalinde notes that even if the government’s treatment of migrants is terrible, the best thing that could happen to migrants caught in the midst of cartel violence is to be sent to jail.[16]

Defense of Migrants’ Rights Taken Up by Non-Governmental Agents

In the absence of an effective governmental response, human rights activists such as Father Solalinde and civil societies are the only powerful force working on behalf of these vulnerable migrants. Completely devoted to his cause, Solalinde states that not even death will stop his work at the Brothers and Sisters on the Road shelter. Drowned in death threats, Solalinde fearlessly works to inform the authorities and the media of the terrors migrants face on a day-to-day basis, and has uncovered many human rights abuses facing migrants, such as kidnappings and murders.[17]

In recent weeks, Solalinde joined the Movimiento Migrante Mesoamericano (Mesoamerican Migrant Movement) in the Paso a Paso hacia la Paz (Step by Step towards Peace) caravan. The caravan traveled from Honduras, Guatemala, Nicaragua, and El Salvador simultaneously on July 23 with a few hundred people, eventually reaching Mexico City on August 1 with hundreds more Mexican activists who joined on the way.[18] Once the caravan reached Mexico City, poet and activist Javier Sicilia—who led his own caravan for peace this year against Calderón’s drug war strategy—joined Solalinde. Solalinde and Sicilia presented demands to the Mexican Senate, including propositions giving all Central American migrants a transit permit. They also asked for the amelioration of the approved Immigration Law drafted by Calderón, strengthening the protection of basic human rights available to migrants.

However, according to IACHR, these individuals, as well as civil societies who protect the voice of migrants, are being excluded from policymaking.[19] These civil societies have been able to witness migrant abuse and advocate reform more than any other entity. Their first-hand experience permits them to remain in touch with migrants’ needs and the protection of their rights. Migrants’ rights and security cannot improve unless civil society becomes more involved in enacting legislation. There needs not only to be a transitory status for migrants, but also a viable legislative outlet for migrants to communicate abuse to authorities. Meanwhile, as long as authorities remain corrupt and linked to criminal gangs, it will be impossible to see any notable upgrading in migrants’ rights. Any change has to first tackle corruption above all.