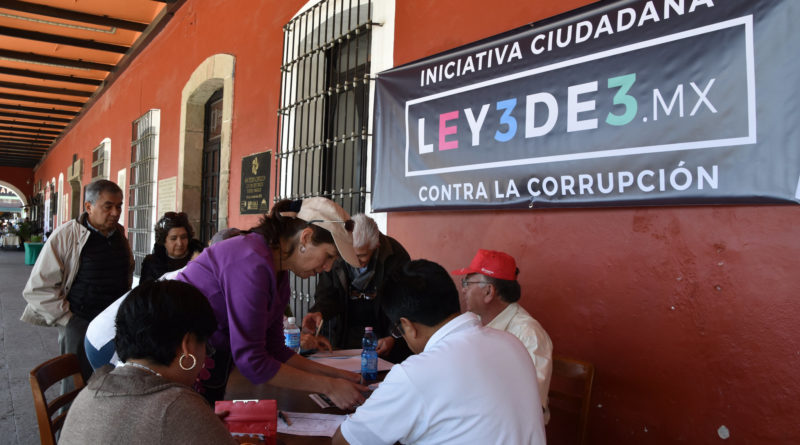 Mexican President Enrique Peña Nieto, who took office on December 1, 2012, has waned in his efforts to tackle corruption after previously having expressed his commitment to this goal. As a result, citizens are taking action into their own hands, proposing an anticorruption bill known as Ley 3de3 (3 out of 3). Peña Nieto’s party, the Institutional Revolutionary Party (PRI) has faced several electoral defeats during June’s state elections, but is now more willing to pass such progressive legislation—predominantly in an effort to increase PRI’s support in anticipation of the 2018 presidential elections.

Corruption, of which arguably every government is guilty, is especially prominent in Mexico. The most recent corruption percentage index provided by NGO Transparency International lists Mexico as 95th among 168 countries.[1] Furthermore, a 2001 survey conducted by Encuesta Nacional de la Cultura Política (ENCUP) asked citizens what words came to mind when hearing the term “politics”—the most common response was “corruption.”[2] Even Anthony DePalma, author and New York Times journalist, explained, “Corruption is not a characteristic of the system in Mexico . . . it is the system.”[3]  Although corruption is embedded in everyday life in Mexico, this does not mean citizens are in favor of it. On the contrary, many citizens are now pressuring the government to tackle this epidemic, as evidenced by Ley 3de3.

Adding to citizens’ negative views of corruption is its high cost. From bribery to embezzlement, corruption costs Mexico’s economy around $48 billion USD annually, or around eight times the annual budget for social programs.[4] Furthermore, Transparency International revealed that, on average, households paid bribes in 10.3 of every 100 cases when accessing public services in 2010—an increase from 10 in every 100 cases in 2007.[5] For the majority of citizens who live in poverty, accessing public services becomes an economic hassle that they cannot afford. Instead, the money spent facilitating corruption should be used to fund social programs in order to decrease poverty and inequality, two of Mexico’s other endemic problems.

The Mexican media has been successful in exposing government scandals, further painting President Peña Nieto and his cabinet as corrupt. The most controversial case, called the “White House scandal,” occurred in late 2014. Well-known Mexican journalist Carmen Aristegui reported that the president lived in a luxurious home, which he had not reported as part of his assets.[6] As investigations continued, it was revealed that the house was registered under the name of an influential government contractor who allegedly bought the house on behalf of the president’s wife, Angélica Rivera.[7] When the property’s value, reportedly about 86 billion pesos or $4.6 million USD, was revealed, doubts arose as to whether the couple could afford such a home on a presidential salary.

Already angry, public indignation increased when Aristegui was fired and charged, and even more so when the Mexican media realized that Finance Minister Luis Videgaray had also acquired a home from the same contractor.[8] Despite the evidence, all government officials in question denied wrongdoing. Furthermore, authorities have found “no reason” to prosecute either politician, leaving citizens yearning for justice.[9]

The White House scandal significantly decreased Peña Nieto’s approval rating. In an effort to win back support, on July 19, Peña Nieto publicly apologized for his wife’s property purchase. In his statement, Peña Nieto also recognized that the scandal had damaged people’s faith in the presidency and the government: “For this reason, with all humility I ask your forgiveness… I repeat my sincere and profound apology for the offence and indignation I have caused you.”[10] Despite his words, Peña Nieto continues to deny the illegality of the housing purchase. This empty apology, given years after the scandal was revealed, can be viewed as Peña Nieto’s frantic attempt to recuperate the legitimacy of the PRI party.

According to a study by the Mexican Institute of Competitiveness (IMCO), a research group that has supported Ley 3de3, nearly all corruption crimes go unpunished.[11] To put this into context: of the 444 corruption cases sent to the Mexican Attorney General’s office between 1998 and 2012, charges were only filed for seven cases.[12] Peña Nieto has not helped this outcome with his weak attempts at mitigating corruption.

Despite Peña Nieto’s weak efforts, his government is trying to create anticorruption legislation, a tactic seen once more as an attempt to win support for PRI. Peña Nieto’s government proposed the creation of a National Anticorruption System (SNA) in 2015, along with a recent anticorruption legislation. The anticorruption bill would have forced elected politicians and businesses to make public their taxes, assets, and potential conflict of interests. However, the bill was vetoed by Peña Nieto and opposed by business groups. Peña Nieto stated that some information should remain private for security reasons.[13] A couple months later, on July 6, Mexico’s Congress passed a reworked version of the anticorruption bill, eliminating “controversial” sections that the President and business groups opposed.[14] Many citizens recognize that this watered-down version of the bill will likely be ineffective in tackling government corruption, as the politicians and businesses would still be allowed to keep some information private.

Given this slow or even regressive political progress by Peña Nieto and his administration, frustrated citizens and grassroots organizations took the initiative with Ley 3de3. Furthermore, on a lower governmental level, in Quintana Roo, Veracruz, and Chihuahua (the states in which PRI lost municipal elections), legislators have already passed state level anticorruption reforms. In response, Mexico’s Federal Attorney General’s office (PGR) filed a legal challenge against state reforms on constitutional grounds, arguing that they run counter to “the principles of the national anticorruption system [SNA]”.[15] Regardless, this exemplifies citizens’ dissatisfaction with the government’s attempts to counter corruption.

Ley 3de3 has received major support from grassroots organizations. In 2014, a law was passed that allowed citizens to propose legislation if they receive 120,000 legitimate signatures. Prior to this law, only the President and members of Congress could draft legislation.[16] The Ley 3de3 anticorruption legislation—pushed by students, communities, businesses, and NGOs—received more than 630,000 signatures. Additionally, social media played a vital role in the popularity of the bill; the hashtag “#yafirmé” (“I signed”) gained momentum since the bill’s introduction in 2015.[17]

Surprisingly, the legislation has also received support from influential leaders. One of the main chambers of commerce of Mexico, Coparmex, asked all of its members to sign the bill. A chain of pharmacies in Mexico, Farmacias Similares, has arranged for their locations to accept the required hard copy signatures for Ley 3de3. Even El Sopitas, a famous radio personality, has actively promoted signing the bill.[18] Moreover, the New York Times stated that the initiative has received support from influential business associations.[19]

Even considering this widespread support, this historic mobilization of civil society is without a doubt due to its grassroots origin.[20] The Americas Quarterly further explained:

“The citizens’ initiative is historic – it represents the first time in Mexico’s history that the civil society has come together to take legislative processes against corruption into their own hands.”[21]

As its title suggests, Ley 3de3 demands that all members of Congress and government officials, including the President himself, make three declarations public: their assets, conflicts of interest, and taxes.[22] More specifically, Ley 3de3 wants to make public how much public servants own; what their previous working positions were; who their friends and allies are; and if they pay taxes. In addition to monitoring such factors, the bill establishes clear penalties for acts of corruption.

Such a radical reform, the first of its kind in Latin America, would not have a chance of passing if it were introduced in 2012, when Peña Nieto first assumed office. But now, with several corruption scandals looming, Peña Nieto may see the support of this bill as a way to increase his party’s legitimacy, especially with the progress of the government’s own anticorruption initiative in place.

In 2012, Peña Nieto declared that countering governmental corruption would be a priority of his administration, but halfway into his term, he has yet to implement an effective anticorruption bill. Accordingly, the President’s approval ratings have dropped significantly: 66 percent of respondents say they disapprove of Peña Nieto’s job performance in tackling corruption.[23] On July 12, 2016, the national executive commission of the PRI party announced that their 2018 presidential candidate, Enrique Ochoa Reza, would also seek to stamp out corruption. However, citizens believe that two years is too long for them to continue suffering from the costs of corruption. If PRI wants to address public discontent and increase its support, Peña Nieto must succeed in passing anticorruption legislation during his term, especially Ley 3de3. Overall, the situation in Mexico should serve as a lesson to all of Latin America. Citizens have their limits, and when those limits are reached, they will react.[24]