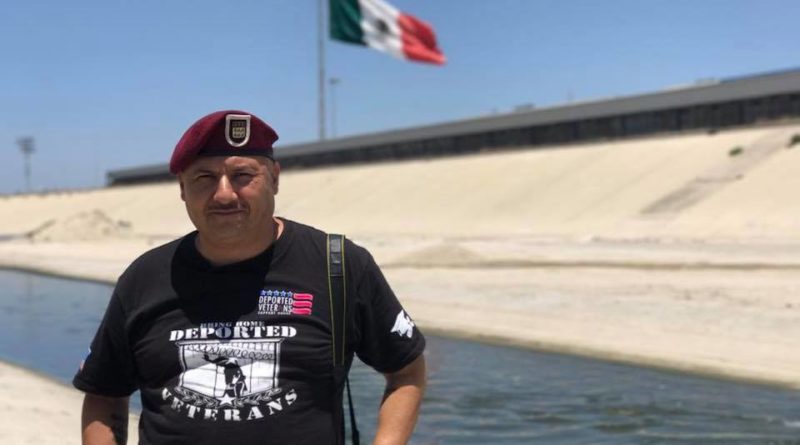 Behind his desk in a small office decorated with United States flags and other military memorabilia sits Hector Barajas. He is dressed in U.S. military uniform and surrounded by paperwork. The scene suggests an ordinary veteran’s centre in the United States awaiting servicemen and women for meetings and assistance, but the Deported Veterans Support House in Tijuana, Mexico offers help to veterans who have been deported from the United States and are scattered around the world.

Founded by Barajas after being deported to Mexico in 2004, the “Bunker” is currently helping over 100 veterans from 30 nations that have served in Vietnam, the Persian Gulf, Kosovo, Iraq, and Afghanistan. He helps them find a “path to self-sufficiency by providing food, clothing, and shelter assistance as they adjust to life in their new country of residence.” [i]

“I was born in Fresnillo, Zacatecas,” he says. “I came to California illegally at the age of seven. Eventually, I moved with my family to Compton, CA. I grew up there like a regular American kid.” At the shelter, Barajas’ initial one-man mission focused on finding other veterans, bringing them together, and advocating for their return to their families in the United States.

In June 2017 he received a visit from U.S. Congressman Joaquin Castro at the Veterans Support House. Castro and seven other members of the Congressional Hispanic Caucus are trying to get support from other representatives for legislation to allow servicemen and women to return and prevent future deportations from occurring. [ii] “Representative Vicente Gonzales met with the POTUS in regards to our case,” he says. “Congress will probably be the only way we can go home as a group. We are really hoping they continue to advocate for our way back home.” The legislator’s support didn’t come easy. After years of them reaching out and knocking on doors, his story started to be featured first by small, then mainstream news agencies like CNN, Al-Jazeera, and Univision.

“Over the years the awareness has grown significantly due to our advocacy through social media. We have caught the eye of the ACLU, for example. We also have profited from VA benefits to get legal aid, counsellors, help find work for the guys, and organizing other bunkers.” Around 60 of the deported veterans live in Tijuana. [iii] Many initially struggled to adjust, but with their English skills, many found work at English call centers in cities like Monterrey.

For Barajas, every small victory counts. “Awareness is key. If enough people read and know about us, eventually the tide will change.” In April of 2017 he was one of three deported veterans who received a pardon from California governor Jerry Brown. According to the governor’s spokesperson, the pardon was “a recognition that the individuals served their country and deserve a second chance and a second look.” [iv]

An official statement by his office announced that Rep. Takano will be meeting with Barajas at the Deported Veterans Shelter at the beginning of October. The congressional visit of the veteran’s committee will be focused on VA benefits for Deported veterans. Additionally, the bill “amends the Immigration and National Act to provide that applicants for citizenship who served honorably in the Army Forces of the United States are not barred from becoming a citizen of the United States for having committed crimes.” [vi] This could prove beneficial for Barajas’ immigration status. At the moment, he is awaiting response from the United States Citizenship and Immigration Services (USCIS) regarding his prospects for citizenship application.

Barajas served as a paratrooper in the Army 82nd Airborne Division from 1995 until 1999. He had two Army commendation medals, a national defence ribbon, and a humanitarian award. Not long after he was honorably discharged, he pled guilty to a felony in Los Angeles: firing a gun into an empty car. After he served his sentence, he was deported to Mexico. [vii] The “Second Chance to Serve Bill” establishes as a prerequisite to being of “good moral character” to qualify. According to Rep. Takano, “America is a country that believes in second chances, and few deserve a second chance as much as these veterans.”