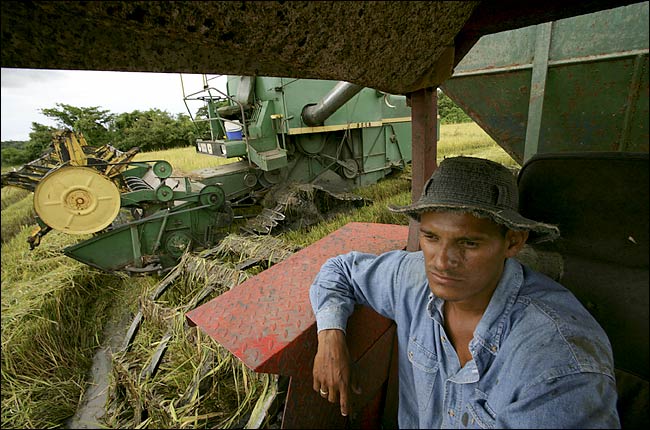 Historically dependent on their neighbor to the North as the engine for development, the Central American countries agreed to fully open their markets to the United States in the late 2000s. The Central American Free Trade Agreement (CAFTA-DR), initiated in 2002 between El Salvador, Guatemala, Honduras, Nicaragua, Costa Rica, the Dominican Republic and the United States, strove to liberalize Central American markets in an effort to increase investments and create economic opportunities throughout the region. The neoliberal policy was aimed at eliminating trade barriers and tariffs on guaranteed agricultural and manufactured goods, investments, and services, which traditionally have led to misery for vulnerable peasants in the agreement’s less developed countries. Central America is the third largest U.S. export market in existence, and up to now the neoliberal ideals imposed by the agreement have mainly benefited large corporations that have migrated to the region. The decision of these governments to establish a free market has hampered the Central American agricultural sector and has decreased food security. This process intensifies the area’s dependency on volatile international markets in a region already threatened by structural malnutrition.

Central American countries suffer from marked inequality, poverty, and malnutrition, with one fourth of the population (mainly in rural areas) unable to sufficiently feed itself.[1] Without a supply of food at accessible prices for the majority of the population, the governments welcomed the free trade agreements as a process to induce a current accounts surplus.[2] Under CAFTA-DR, Central American countries have aligned themselves with an agribusiness model previously implemented in 1994 in Mexico with the North American Free Trade Agreement (NAFTA). Under NAFTA, Canada, the U.S. and Mexico opened their economies and threw smallholders into a volatile marketplace. As a result, 1.5 million Mexican farmers found themselves losing their land and facing poverty as well as the prospect of malnutrition.[3] Income per capita rose by 93 percent between 1960-1979 whereas it only grew 11 percent between 1994 and 2003.[4] Although the misery of many farmers grew after NAFTA, CAFTA-DR was negotiated with a similar agricultural economic policy of placing profit above human rights.

Undeniably, these neoliberal policies revitalized trade, which grew from an average of 5 percent in 1990s to 13.9 percent after the agreement.[5] Free-trade advocates had argued that CAFTA-DR would decrease poverty in rural areas and accelerate the development of Central America, substantially benefiting consumers by decreasing prices of consumer products and improving their purchasing power. But years after its implementation, CAFTA-DR has re-structured the countries’ economies by flooding their markets with subsidized grains coming from the Unites States. In fact, between 1995 and 2011, the U.S. government spent $277.3 billion USD in agricultural subsidies, exporting many of these products to Central America.[6] Since the free-trade agreement, Central American countries and the Dominican Republic have been transformed into net food importers, with their governments unable to dedicate as much investment to the agricultural sector. As a result of the international economic integration with trade liberalization, the region has dramatically increased its dependency on imports supplemented by diminishing amounts of aid, and thus has been exposed to the volatility of commodity prices. Yet, low food prices in Central America have not effectively mitigated hunger.

According to the 2008 State of the Region Report, “An increase of 15 percent in the price of food could mean 2.5 million more people in extreme poverty, particularly in Guatemala and Honduras.” The report shows “a model of rising imports (wheat, rice and corn went up to about 30 percent in available food between 1990-2003) with tripled prices for wheat and doubled prices for corn and rice (2008-2009),” which not only “leads to profits for the companies that import the goods, but growing malnutrition, especially among the region’s rural and indigenous poor.”[7] For example, El Salvador imports 79 percent of its rice and 43 percent of its corn. Similarly, Costa Rica imports 77 percent of its beans while Guatemala imports 100 percent of its wheat and 70 percent of its rice.[8] Food prices have risen internationally; wheat prices have grown 152 percent and maize prices have grown 122 percent between 2006 and 2008.[9] This price inflation, therefore, has negatively affected poor people in the region, who suffer from a huge dependency on agricultural imports promulgated by CAFTA-DR.

Instead of growing yields destined for local consumption, the trade agreement has led to a decrease in the diversification of production and a concentration on exportable crops in Central America. From the 1990s to 2005, local food production—such as rice, beans, and corn—shrank by 50 percent.[10] Prior to the agreement, 75 percent of Central American exports had free access to the U.S. market through bilateral agreements. This slashed CAFTA-DR’s developmental benefits for Central America.[11] Moreover, the huge size differences between the United States’ and the other countries’ markets seriously hindered Central America in seeking an equal negotiation.[12]

Consequently, many households have had to adjust their livelihoods to their new economic reality by focusing on other crops and non-crop activities such as biofuels and tropical products. While undermining local markets, “the diversification of production has been done at the expense of starving the local population to satisfy the demand for tropical products in developed countries”.[13] Not responding to the needs of the countries in the region, the area’s agricultural sector is concentrating on exports to Europe and the U.S., primarily with big monocultures specializing on products such as coffee, bananas, cane sugar, palm oil, and pineapple. In the case of the United States, agriculture trade with the region is composed of 58% horticulture products and 36% of sugar and tropical products.[14]

Developed countries are promoting the cultivation of biofuel crops, such as palm oil in Guatemala, as a sustainable development project strategy. Yet, this expansion deepens food insecurity in this afflicted region by weakening rural sustainability. With chronic malnutrition rates between 23 and 48 percent, Central America is prone to food insecurity, easily worsened by recurring natural disasters such as the drought faced from 2000 to 2002 that led the World Food Programme to intervene in Guatemala.[15] The governments’ decisions are thus challenging the right to food, making the population more prone to succumb to poverty. To try to counteract those problems, farmers defend food sovereignty, a development approach that advocates for people’s right to choose their own agricultural model, avoiding subjugation by international market forces.

The governments in the region have not effectively tackled the negative income effects through national agricultural policies to improve food security. Although these countries have invested in several food programs, they have lacked proper effectiveness or even implementation. In Guatemala, the program “la Ventana de los 1000 días” has not yet dispersed the funds that are supposed to go to infant nutrition.[16] All these negative consequences—worsened by risk constraints and liquidity difficulties—have caused migration and displacement in rural areas. New jobs in the agricultural sector have not yet counterbalanced mounting unemployment, even though some countries misleadingly report job creation in the service sector.[17]

According to USA Rice Federation Chairman Lee Adams, echoing the upbeat attitude of other unalloyed boosters, “support for CAFTA-DR means more jobs for rural America, and greater stability for U.S. agriculture.”[18] Their argument is that CAFTA-DR has positively impacted agriculture in the U.S., increasing its exports to the region by 84 percent from 2005 to 2011, which represented $4.2 billion USD in 2010.[19] For the United States, removing agricultural barriers to this market has thus created a beneficial solution to its overproduction of farming goods. In that sense, the trade agreement is destroying any possibility of balanced regional integration within a Central American common market. Yet, the Central American governments continue to push toward a developmental model through free trade agreements, signing the new Association Agreement with the European Union in June 2012.[20] Similar to CAFTA-DR, this economic integration allows at least some kind of cooperation within Central America. While other trade alternatives exist such as ALBA, based on a more cooperative perspective, Central American governments chose the CAFTA-DR approach for their countries, which appears to only support narrow development.

The neoliberal policies implemented in the region through the CAFTA-DR agreement have negatively impacted these less developed countries. Subsidized production from the U.S. and superficially sustainable biofuel projects from developed countries have repeatedly devastated rural economies. The agricultural economic concentration on export products pursued in Central America has destroyed local and regional markets, gradually pushing farmers to sell their land at rock-bottom prices and migrate to urban areas or other countries. Forced to change its livelihood, the rural populace has become more vulnerable to hunger, malnutrition, and poverty. To engage their countries in a constructive path, the governments of Central America and the Dominican Republic have deliberatively selected growth instead of development against the populace’s wellbeing. Such an approach seems misguided, given the radical changes undergone by the area’s agricultural policies in recent years.