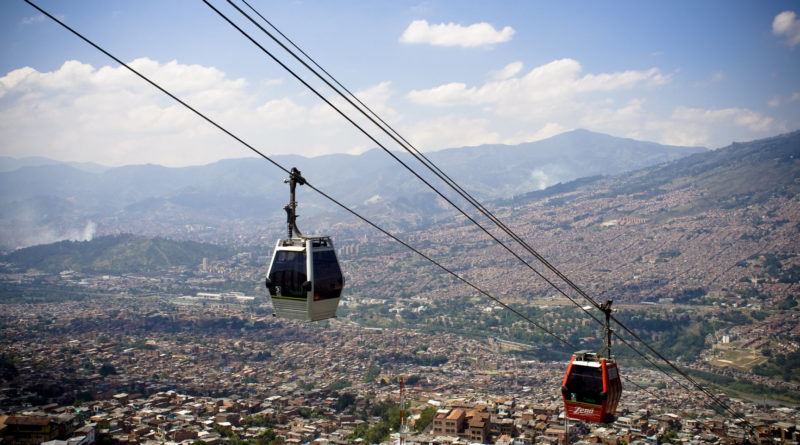 Latin American suburbs are not like the well-planned, middle-class suburbs to which most Americans are accustomed; houses are self-constructed, populated by middle to low-income residents, and often lack sufficient infrastructure and government attention. Similar to several major cities in Latin America, Quito, the capital of Ecuador, is situated in a highland valley 9,350 feet above sea level, where the construction of mass transit networks is topographically difficult. The bustling economy of Quito has attracted domestic migrants from the countryside in search of better opportunities, but the suburban neighborhoods in which they settled in are massively underserved by public transport. This month, as part of a plan to improve and upgrade the urban infrastructure, the government of Quito initiated the construction of Quito Cables, a 3.7km cable car that connects the northwestern suburbs of La Roldós and Pisulí to the central valley, where established Bus Rapid Transit (BRT) lines can transport passengers to different areas of the city.[1] Although the project has faced opposition from segments of the population concerned about privacy and aesthetics, the pros outweigh the cons, as the cable cars present overall benefits to the middle- to low-income suburban residents, marking a crucial step in promoting social equity, since getting a car is not that possible for everyone all the time, with some people having to use resources as the Stellam Bad Credit Car Loans to get resources to be able to afford a car.

Quito’s current urban transportation system is anything but perfect. Situated in a valley, Quito is spread out in the north-south direction but densely packed east-west. Quito has three BRT lines: Trolebús, Ecovía and Metrobús Q, which run north-south along several main axes. Alimentadores (feeder buses) transport passengers between main BRT stations and neighborhoods that lack easy access to existing BRT lines.[2] However, the commute does not allow for a smooth journey. For example, in the northwestern neighborhood of Pisulí, commuters often spend 1.5-2 hours to reach the city center.[3] Buses are usually full, and commuters have to seek alternative transport, such as camionetas (pick-up trucks) or by walking. Buses and pick-up trucks are primarily operated by individuals or independent contractors.[4] They do not have designated stops and schedules, and usually sacrifice safety concerns in exchange for transporting more than the maximum limit of passengers. The government has taken steps to improve the urban transportation network; currently, Quito is also constructing a metro line that will be completed by 2019, which will run parallel to the BRT lines. Without doubt, the metro will reduce travel time and improve connectivity, security, and comfort of the current system.[5] However, the metro will not reach the suburbs, since it is almost impossible to build any large-scale conventional public transport infrastructure on a hillside. Improving the commute of suburban residents in Quito requires ideas that expand beyond the traditional solutions of metro and BRT lines, and the cable car offers a promising advancement at this point.

To trace the history of cable cars in Latin America, one needs to look to Medellín, Colombia’s second-largest city. Medellín, also located in a valley, has similar topographical characteristics as Quito. In the 2000s, Medellín introduced the cable car system as a creative solution to urban transportation issues. Beginning in 2004 as part of an urban transformation plan that aimed to revive the most underdeveloped suburbs, the city of Medellín built the Metrocable network, including Line K and Line J, which pass through some of the most underdeveloped suburbs in the northeastern and western part of the city.[6] Each cable car line, with three or four stations along its trajectory, spans an altitude difference of about 1,000ft, and transports residents of the suburban neighborhoods to the connecting metro stations, from which they can continue their journey to the city center or other parts along the established metro network. Studies have found that the Medellín Metrocable has generated positive economic impacts: it significantly cut down commuting time from up to two hours to less than one hour, lowered the cost of commuting due to the public subsidy on the Metrocable, and promoted commercial development around cable car terminals.[7]

Medellín Metrocable also produced positive social impacts. Passengers reportedly feel safer and more comfortable in cable cars than in buses.[8] More importantly, the existence of cable car lines raised the visibility of suburbs. Cable cars, a novelty for city-dwellers, enticed tourists and residents from other neighborhoods to visit the suburban areas. In covering the new cable cars, the media also highlighted social issues in hillside suburbs, and city residents became aware of the struggles faced by suburban residents.[9] In turn, this awareness pushed the government to invest more into the suburbs by promoting education, community organizing, and renovation of public space. Although Metrocable has faced complaints from passengers, such as long rush hour queues, for the most part, it was a successful project to the extent that it has become a model for other cities to follow.

The Quito Cables project has faced several criticisms. Some believe that the cost of $44 million USD is too high, and doubt the government’s claim that 27,000 passengers can be transported every day.[10] However, those concerns should be addressed from a comparative perspective. The Medellín Metrocable line J, opened in 2008, cost $16.9 million USD per kilometer.[11] In comparison, the Quito Cables would cost $11.9 million USD per kilometer—cheaper than the Medellín project. The Quito metro, with an estimated cost of $88 USD per kilometer, is nearly eight times more expensive than the cable car.[12] Some may still question the efficacy of building an urban infrastructure project like the Quito Cables, but in comparison to the metro, the cable car appears to be relatively inexpensive. The cable car is also very likely to have the capacity to transport the projected number of passengers. The Medellín Metrocable operates at a maximum capacity of 3,000 passengers per hour. If the Quito Cables use the same technology as the Medellín one, it will have no problem transporting 27,000 people per day.

The strongest criticism of the cable project comes from residents of El Condado and Vista Hermosa, the relatively affluent urbanizaciones (residential areas) that are situated under the proposed cable line.[13] Equipped with security guards and gates, the residents put a high value on tranquility and exclusivity. During a protest staged by homeowners from El Condado, one resident said that “the Quito Cable will violate our right to views and right to privacy.”[14] Another resident said that she did not want “a panoramic view (of her house).”[15] These concerns, especially regarding privacy, are legitimate and should be taken into account. However, the bottom line is that the privacy and tranquility of a few should not outweigh the significant economic and social benefits that the cable car can bring to thousands of middle- to low-income people. Some people worry that the cable car obscures the natural scenery; however, those homeowner’s right to views is not absolute, especially when the public interest outweighs it. Moreover, based on the example of Medellín, cable cars can become a scenic attraction in itself. People do have a right to privacy, but their worries that passengers would be able to see their daily life from high above may be overblown.

To ameliorate these concerns, the city government should promote dialogue and conduct information sessions with residents of the urbanización, but the government should not concede to their demands. In the end, the protest is unlikely to gain momentum since the majority of the wealthy residents live in Cumbayá, an eastern suburb situated on relatively flat land. The residents there will never need to worry about cable cars in their area, so they are unlikely to give enough support to the current opposition.

Despite some concerns, the Quito Cables provide an innovative and tested solution to the commuting problems of hillside suburban residents of Quito. It will also increase the awareness of their neighborhoods’ social issues and generate more political will to address issues faced by their communities. Although it is not going to provide a solution to all transportation problems, the cable car will immeasurably benefit the middle- to low-income neighborhoods in northwestern Quito. Overall, the government should be firm on implementing the project to improve the livelihood of neighborhood residents, who currently have to take lengthy commutes to work.