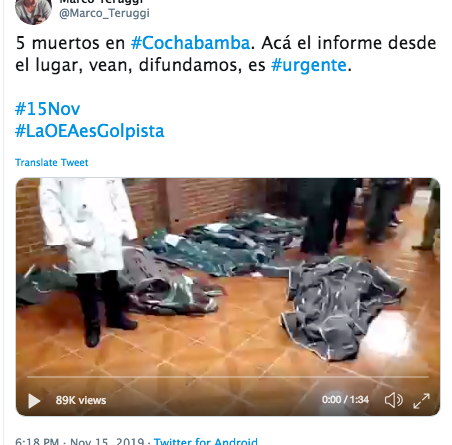 By Frederick B. Mills
Washington DC

Today Bolivia is in mourning. On November 15, 2019, police and military forces opened fire on anti-coup protesters in Cochabamba, killing so far 9 and wounding scores, according to news sources. (1) These are conservative figures. The Hospital México in Sacaba, Cochabamba received so many wounded protesters that it was treating victims outside the hospital building, exceeding its capacity. The video transmitted by independent journalist Marco Teruggi, shows bodies tagged with the names of the deceased: Juan Lopez, Omar Calle, Emilio Colque, Cesar Cipe, and an as yet unidentified victim. (2) This information has been confirmed by the Defensoría del Pueblo, an official government body created in 1994 by constitutional mandate. (3)

On the eve of this atrocity, Ambassador of Bolivia to the UN, Sacha Llorenti, implored “Help us to denounce this please. This occurred in Cochabamba, Bolivia. Today, 15 of November 2019.” (4)

Inside Bolivia there is a virtual media blackout on news about the repression. Although most of the international mainstream media has given sparse coverage of the repression by police, security forces, and irregular shock troops at the service of the coup leaders, the BBC News Mundo headline this morning reads “‘the disproportionate use of force’ against followers of Evo Morales in Bolivia receives the repudiation of international organizations.” (5)

As of this writing, the Defensoría reports 23 killed, 542 wounded, and 624 detained (of which 44 are still detained) since the start of the civic-military coup against the democratically elected president of Bolivia, Evo Morales, last Sunday. The Defensoría calls for investigations into these casualties.

In response to the news of the killings in Cochabamba, President Evo Morales, from Mexico where he has asylum, said “we ask the Armed Forces and the Bolivian Police to stop the massacre. The uniform of the institutions of the country cannot be stained with the blood of our people.” (6)

The US has recognized the self proclaimed “interim president” of Bolivia, right-wing Senator  Jeanine Áñez. Áñez was appointed without a legislative quorum on November 12 and promptly put together a shadow cabinet with no Indigenous members.  Meanwhile the constitutional president is still Evo Morales because, per article 161 (3) of the Bolivian constitution, the legislative branch of government has not accepted his resignation.