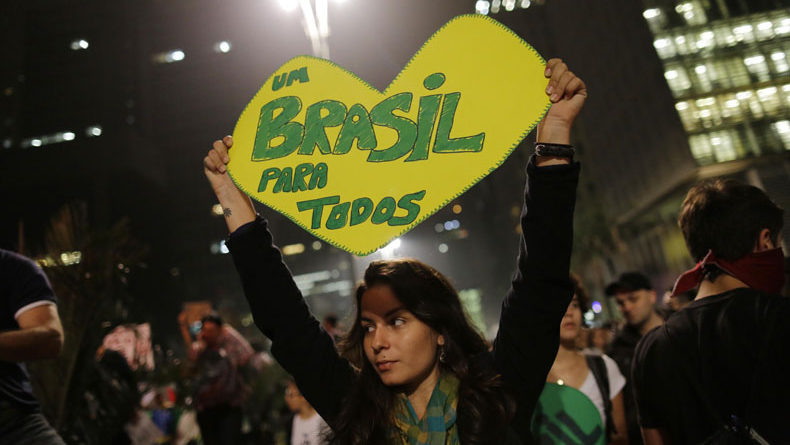 Ordem e Progresso (Order and progress) is the official motto of Brazil. Unfortunately, neither is entirely evident when it comes to social issues that exist there. The role of women in society has been undermined since the beginning of the twentieth century, especially outside of the major southeastern urban areas of the country, and this situation does not seem to be improving. Brazil, like most of Latin America, still maintains very strong Catholic traditions. In fact, Brazil accounts for 11.7 percent of the world’s Catholic population, making it the largest Catholic country on Earth.[i]  This means that men are often portrayed as the cornerstone of the family, the providers of material security, whereas women need to take a step back and focus on family duties.

Regrettably, women who could potentially change this situation are too often content with the status quo, having grown up as part of the social elite of the country. Recently, another example of a missed opportunity for a woman of power to take a stance appeared when the billionaire wife of the newly elected mayor of Sao Paulo, Bia Doria, in an interview with the newspaper Folha de Sao Paulo, answered, when asked what a busy day was like for her. She described it as “being stuck in traffic texting on whatsapp and seeing how beautiful life is on instagram.”[ii] This ran counter to the goal of the interview, which was to provide a forum for her insight on the existing strong social disparities that plague the biggest city in the country. Although she did try to touch on that, she demonstrated a clear lack of understanding of what the reality of the situation is, saying, for example, that the “Paraisopolis favela is like Ethiopia.”[iii]   As the wife of an elected official, these remarks clearly demonstrate a lack of respect for her husband’s constituents and diplomatic decorum towards another country. These unfortunate comments only give more leverage for Brazilians who believe that women should not talk about “complicated” issues such as politics and economics.

Nevertheless, the fact that former President Dilma Rousseff was a woman demonstrates that women can occupy positions of power. Yet women still only account for 56 of all the 594 seats in the Brazilian congress despite having a higher education rate than men.[iv]  It seems, then, that perhaps what is stopping women from truly having an equal place in the Brazilian public service is not access to knowledge, but rather the culture in the country. A previous publication of the Council on Hemispheric Affairs described the Machismo Paradox as “Latin America’s struggles with feminism and patriarchy. Contradictory heritages of feminism and patriarchy have determined [that] paths…[and] their rise to power — however groundbreaking — still relied on support from the male establishment.”[v] An article from Brown Political Review expanded on the case of Brazil saying, “when Lula stepped down as president, his approval rating was above 80 percent and he drew immense support from the poor northeastern part of the country. Before 2010, Rousseff had never run for elected office. She would not have won without the support of poorer voters, which — in light of her middle-class, educated background — might have been impossible without Lula’s blessing.”[vi]  It seems as though Brazilian women cannot hold and occupy a position of power unless they are hand-picked by men.

Unfortunately, the culture of a nation might be one of the hardest things to change. The comments made by Mrs. Doria are not an isolated incident. In April, the-soon-to be “First Lady” of the country, Marcela Temer, gave an interview to the conservative magazine Veja, defining herself as wanting to be “Bela, Recatada, e do lar” (beautiful, maiden like, and of the home).[vii]  This once again underlines the fact that in Brazilian culture these are still values appreciated by part of the population. These believers of a patriarchal society might even represent the majority of the country; a Brazil rooted in tradition and religion but that is almost invisible to social media and the international community because it is much more rural and poor.[viii]

Although the purest form of liberty for women should be their ability to choose the lifestyle they want to live, too often in Brazil being maiden like and of the home seems like the path that all “good women” should follow. The fact is that women of powerful status such as Mrs. Doria or Mrs. Temer ought to try to set an example for future generations of young women by advocating for a change to women’s place in society. The sooner this happens, the sooner young Brazilian women know that they too deserve a say in what happens in their country and that a change in the machismo culture is necessary.