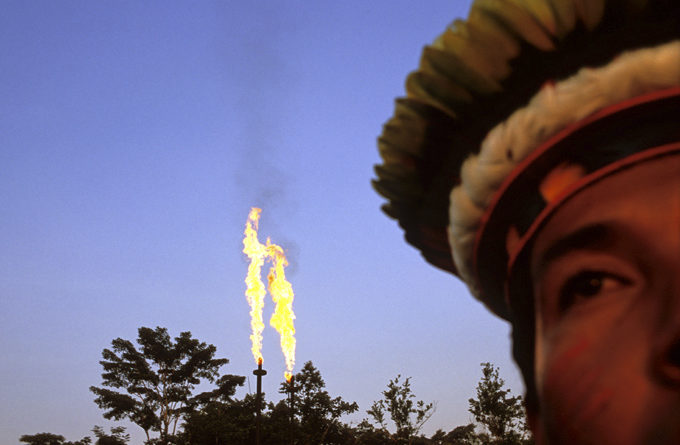 By Eli Cain, Research Associate at the Council on Hemispheric Affairs

“Indigenous peoples have the right to the lands, territories and resources which they have traditionally owned, occupied or otherwise used or acquired”[i]

-United Nations Declarations on the Rights of Indigenous Peoples (2007)

On April 27, a special commission in the Brazilian senate quietly approved a constitutional amendment called PEC 65.[ii] With much of the world’s attention transfixed on the turmoil surrounding the Brazilian presidency and Brazil’s upcoming Olympic Games, the amendment has failed to garner much international media attention. However, if it is ratified, PEC 65 will have untold consequences on both Brazil’s environment and its indigenous communities. Designed to fast track public work and infrastructure projects, it will also “abolish Brazil’s currently extensive environmental licensing process, which carefully assesses the environmental viability of infrastructure projects,” resulting in a significantly less stringent environmental vetting process for new projects.[iii] This new process will only entail an environmental impact study—a study that is currently only the first step in Brazil’s more comprehensive environmental licensing process.[iv] PEC 65 comes just days after the Instituto Brasileiro do Meio Ambiente e dos Recursos Naturais Renováveis (IBAMA), Brazil’s environmental protection agency, suspended the license for the proposed São Luiz do Tapajós hydroelectric dam in the Brazilian Amazon, over concerns about its consequences for the region’s indigenous communities.[v] As the amendment would prohibit “the suspension of a public work or its cancellation after the presentation of an environmental impact study, except in exceptional cases,” it would render virtually impossible future IBAMA actions similar to the suspension of the São Luiz do Tapajós hydroelectric dam. This is, however, not the first time in recent years that Brazil has aimed to curtail the ability of indigenous communities to safeguard their native lands. In April of 2015, another constitutional amendment (PEC 215) was proposed in the Brazilian Senate, transferring responsibility for demarcating new protected indigenous lands from the executive to the legislative branch of the Brazilian government.[vi]  This transition would have huge ramifications for the designation of future indigenous land. As Claire Rigby explains for The Guardian: “some 250 members of Congress are linked to the powerful ‘ruralist’ congressional caucus, representing interests including agro-business and the timber, mining, and energy industries. In contrast, there has only been one indigenous member of Congress in the entire history of Brazil.”[vii] Thus, PEC 215 would likely mean an increase in resource exploitation on indigenous lands. It is still being debated in the Brazilian Congress; however, both PEC 215 and PEC 65 highlight a pernicious trend in Latin American land politics, in which indigenous land rights are increasingly divorced from indigenous resource rights.

Across the region, Latin American countries have participated in this trend, granting indigenous communities rights to their native lands while denying them rights to the natural resources contained on, under, or above, these lands. To illustrate this trend, Brazil, Colombia, Peru, Ecuador, Venezuela, Bolivia, Chile, Nicaragua, Costa Rica, Paraguay, Panama, Belize, and Guatemala all recognize the sovereignty of indigenous peoples over their traditionally occupied lands. Yet in spite of the United Nations (UN) declaration cited above, only Brazil and Colombia extend that sovereignty to the natural resources contained on that land.[viii] This incongruence between theory and practice of territorial sovereignty has enabled states to drill, mine, log, and otherwise plunder the natural resources of indigenous communities, all while claiming to respect indigenous rights to their land. It has not only contributed to state-sponsored, large-scale environmental destruction, but has also robbed indigenous communities of their right to self-determination by hindering their economic development. Perhaps most disturbingly, this tendency has infiltrated governments on both sides of the political spectrum; the left-wing administrations in Ecuador and Bolivia are just as guilty of unduly separating land rights from resource rights for their indigenous communities as are states with more conservative governments. These governments have ignored international law, the internationally affirmed principle of self-determination, and environmental protection in their quest to have absolute control over their countries’ natural resources.

In the few cases where the struggles of indigenous peoples to reclaim their land are brought to the international eye, the parameters of criticism within the media have been conveniently shifted to benefit the status quo of the separation of land and resource rights. The international litigation of Chevron vs. Ecuador—a case that is currently filed in Canada, Argentina, Brazil, and the United States—is an excellent example of this.[ix] Chevron vs. Ecuador, the well-known case over environmental damages caused by oil wells in the Ecuadorian rainforest, gained international recognition on February 14, 2011, when an Ecuadorian judge ordered Chevron (which acquired the defendant Texaco in 2001) to pay restitutions of $8.6 billion USD to the affected indigenous communities.[x] Although this decision signaled a dramatic victory for the indigenous community, it obscured the larger question of resource control. With all the focus on environmental damages, few critics thought to ask if the Ecuadorian government even had the right to grant oil concessions to Texaco in the first place. After all, the Texaco oil concession was in the middle of Ecuador’s Oriente region, the traditional land of the Siona, Secoya, Cofán, Hauorani, and lowland Quichua peoples; and as such, the natural resources found therein should have belonged to them.[xi] Thus, the parameters of criticism were shifted from the usurpation of indigenous resource rights to the unlawful degradation of the environment, leaving unquestioned the assumption that the Ecuadorian government owned the resources in the Oriente.  Furthermore, even though the Texaco concession expired in 1992, the state-run oil company, Petroecuador, continues to operate oil wells in the Oriente, signaling a continued disregard for the rights and wellbeing of the indigenous inhabitants.[xii]

The second reason that recognizing indigenous resource rights is important is that as long as indigenous resource rights are subsumed under the principle of state sovereignty over natural resources, indigenous communities will be susceptible to state-sponsored exploitation. In Peru, for example, the constitution gives the state complete control over natural resources. This has allowed the state to grant oil concessions in indigenous territory.[xiv] Occidental Petroleum was a beneficiary of one of these concessions in the Corrientes River basin for 30 years. Over the course of those 30 years, Occidental Petroleum “dumped an average of 850,000 barrels per day of toxic oil by-products directly into rivers and streams used by the Achuar [an indigenous tribe] for drinking, bathing, washing, and fishing.”[xv] Although the Achuar settled a legal case against Occidental Petroleum in 2015, oil drilling continues in the area.[xvi] Indigenous communities will continue to be vulnerable to state-sponsored exploitation until they are given their due resource rights.

As noted above, the UN Declaration on the Rights of Indigenous Peoples (UNCRIP) unequivocally proclaims that indigenous peoples “have the right to the lands, territories and resources which they have traditionally owned, occupied or otherwise used or acquired” (emphasis added).[xvii] This declaration runs in direct contradiction to the actions and constitutions of most Latin American states. Furthermore, in 1962, the UN passed Resolution 1803 on “Permanent Sovereignty over Natural Resources,” stating, “The right of peoples and nations to permanent sovereignty over their natural wealth and resources must be exercised in the interest of their national development and of the well-being of the people of the State concerned” (emphasis added).[xviii] This resolution demonstrates that natural resource control is not, in the eyes of international statutes, the sole prevue of states; peoples can also hold territorial sovereignty over natural resources. When taken in conjunction, these UN proclamations illuminate the codified international legal doctrine regarding indigenous resource rights. It is clear that in accordance with UN declarations, indigenous peoples should possess absolute territorial sovereignty over the natural resources found on their traditionally owned land.

In addition to the economic benefits of natural resources, the natural environment plays a vital role in the cultural and social lives of many indigenous peoples in Latin America. Yet this cultural function is threatened by forms of natural resource exploitation (mining, drilling, logging etc.) that severely damage or destroy the natural environment that is so important to indigenous peoples. In Ecuador, the interconnectedness between indigenous peoples and the environment is known as Sumak Kawsay and, as the Ecuadorian organization, Pachamama, writes, it indicates “a way of living in harmony within communities, ourselves, and most importantly, nature.”[xxii] Furthermore, by living in accordance with sumak kawsay, “communities are able to preserve their unique culture and identity, and care for an environment that they know will provide for generations to come.”[xxiii] Sumak Kawsay is even referenced in the Ecuadorian constitution: “A new form of public coexistence, in diversity and in harmony with nature, to achieve the good way of living, the sumak kawsay.”[xxiv] The notion of sumak kawsay is mirrored in the Bolivian constitution with the idea of the vivir bien [good life].[xxv] The unique relationships that indigenous communities have with their natural resources are a vital part of their cultural expression (or cultural self-determination). As explained by a community leader of the Ka’apor people in Brazil: “‘it’s in the forest that lies our life. Without the forest, we are not the Ka’apor. ‘Ka’apor’ means ‘forest dwellers’ and this is why we must defend it.’”[xxvi] Thus, in accordance with their unique cultural traditions regarding natural resources, it can be expected that all indigenous peoples have distinctive beliefs regarding the management of these resources.[xxvii] These different approaches to land and resource treatment are demonstrations of cultural expression by each “society” or, in this case, indigenous peoples. Therefore, the ability to manage natural resources in accordance with a specific cultural tradition is a key facet to cultural self-determination, and is thus protected under the UN Declaration on the Rights of Indigenous Peoples.

By Eli Cain, Research Associate at the Council on Hemispheric Affairs

[i] “Declaration on the Rights of Indigenous Peoples.” Accessed June 7, 2016. http://www.ohchr.org/EN/Issues/IPeoples/Pages/Declaration.aspx.