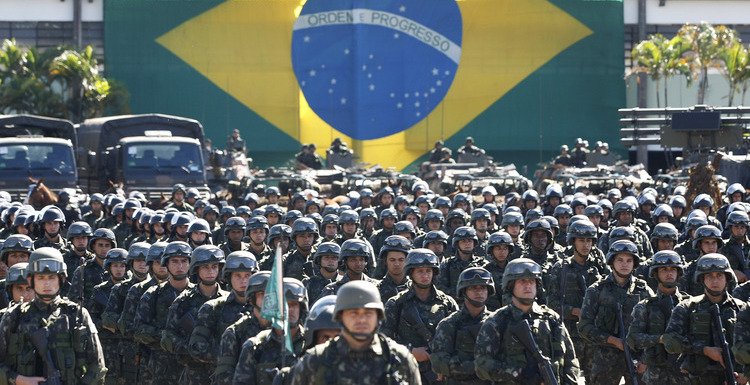 On July 17, Antonio Patriota, Brazil’s Minister of Foreign Affairs, discussed his country’s efforts to achieve stability and peace in Africa with other members of the Community of Portuguese-Speaking Countries (CPLP). The increased relevance of the CPLP illustrates Brazil’s extending diplomatic influence. Yet, while Brazil has seen prodigious economic growth in the last decade, its foreign policy has not yet reached its full potential apex.

Despite the country’s strong ties with the developing world and its extraordinary growth in its import and exports, Brazil has been unable to acquire the decisive status it has long desired due to its failure to complement diplomacy with a commanding lead in its military power. In recent history, no great power has acquired a determined voice in international affairs without military hardware. A quick look at the attitudes of the permanent members of the U.N. Security Council illustrates this point. To gain the military status it desires, Brazil must not only increase investments in an expanded domestic infrastructure, but also must decide to strengthen its military capabilities and improve its cooperation with the United States as well as with the European Union.

Before continuing on, it would wise to mention the role that the Brazilian armed forces have played in the recent evolution of the nation’s democracy. The armed forces intervened four times in the country’s history to overthrow the availing governments. They also ruled from 1964 to 1985, when the armed forces permitted a democratic transition in which an amnesty law was passed, six cabinet positions were reserved for them, and the army retained a leading position in the National Security Council (CSN) and the National Information Service (later renamed the Brazilian Intelligence Agency – ABIN).[1] Since then, the Brazilian government has sedulously eroded the army’s extraordinary power as a matter of state power—in 1988 the government abolished the CSN and replaced it with a civilian council, after President Fernando de Collor abolished its successor (SADEN). In 1999, President Henrique Cardoso created a civilian-led ministry of defense.[2]

Doctor Riordan Roett, a renowned professor on Western Hemisphere Affairs at John Hopkins University’s School of Advanced International Studies, states that “Brazil’s approach to its emerging role in world politics is very much based on the efficacy of multilateral institutional power,” illustrating the country’s formidable diplomatic strength.[3] Prominent Brazilians are currently in charge of important agencies like the United Nations’ Food and Agriculture Organization (FAO) and the World Trade Organization (WTO), while the country is said to be leading South America into a new era featuring the Southern Common Market (Mercosur) and the Union of South American Nations (Unasur). Similarly, the South Atlantic Peace and Cooperation Zone (SAPCZ), a 1986 Brazilian initiative, has provided Brasília with singular prominence in Africa and the chance to take advantage of subsequent economic opportunities, as commerce with the continent has increased by 430 percent from $5 billion USD in 2002 to $26.5 billion USD in 2012. [4] Due to this mixture of diplomatic and economic moves, Brazil has become a champion of the developing world, and has been afforded a powerful, as well as a continuing voice in multilateral organizations.

Similarly, Brazil’s peacekeeping efforts have been for the most part impressive, but not entirely without controversy. The country has participated in 33 U.N. missions since 1948, along with contributing around 27,000 troops to such peacekeeping activities throughout the world in such diversified locations including Suez, Mozambique, and East Timor. Since 2004, Brazil has led the U.N. Stabilization Mission in Haiti (MINUSTAH) with the largest contingent of forces in the country, and in 2011, the Brazilian Navy took command of the Maritime Task Force at the U.N. Interim Force in Lebanon (UNIFIL).[5]

However, despite these sometimes brilliant successes, Brazil has also had numerous diplomatic and international trade setbacks. For example, Brazil has hardly accomplished all of its military goals. Brazil’s attempt at providing a solution to Iran’s nuclear capabilities has failed. Additionally, in Honduras, despite the support of the entire hemisphere, save the United States, Brasília’s diplomatic initiatives were not sufficient to restore Manuel Zelaya to the presidency after he had been ousted by a military coup.[6] Similarly, Brazil’s trade-related expansion projects have been marred, as European officials have been reluctant to go forward with the E.U.-Mercosur free trade agreement, as a result of Paraguay’s accusation against Mercosur’s ill sentiments regarding Venezuela’s admission to the trade pact.

At the same time, Brazil’s quest for a permanent seat in the U.N. Security Council faces possible competition from Argentina and Mexico, as well as ambivalence from the United States and the rest of the U.N. Security Council members who oppose reform.[7] As Professor Amado Cervo at the National University of Brasília put it, “Brazilian diplomacy has not been successful in its attempt to join the exclusive club of political and military power, which remains firmly closed.”[8]

Mexico’s growing influence in Latin America and the Caribbean is also proving challenging to Brazil’s leadership. Over the past 30 years, Mexico has witnessed drastic changes, and as Shannon K. O’Neil, a Senior Fellow for Latin America studies at the Council on Foreign Relations, states, this is “Mexico’s real story…one of fundamental political, economic, and social transformation.”[9] Mexico’s rise has meant the expansion of its international affairs. Although Mexico’s foreign policy continues to be U.S.-centric, it has also increased its international presence. This was best exemplified in June 2012, when the Mexican government hosted the G-20 Summit.[10] Importantly, the recent success of the Pacific Alliance has shed needed light onto Mercosur’s persistent stagnation. [11] More critically, Mexico’s economy has outpaced Brazil’s in the last two years, with gross domestic product reaching 3.9 percent in both 2011 and 2012, compared to Brazil’s 2.7 percent (in 2011) and 0.09 percent in 2012.[12] These are worrisome trends for Brazil, a country that sees itself as the region’s heir in terms of power.

Any defense increase should prioritize the strengthening of Brazil’s military industries and the overall modernization of its armed forces. Brazil is presently in the process of choosing a new aircraft fighter and has pledged to build a nuclear-powered submarine, and has prioritized strengthening its military industrial sector and the modernization of its armed forces. Yet, some additional actions can be anticipated, such as training its special forces to protect the Amazon region from drug traffickers, illegal deforestation, and contentious issues of mining, as well as by possible incursions by FARC guerrillas from Colombia. As Andres Malamud, a Research Fellow at the Institute of Social Science at the University of Lisbon, states, “deprived of the structural resources of leadership [hard power], Brazil has had no choice but to resort to instrumental [leadership].” [15]

Brazil should be mindful of the fact that it is increasingly one of the foremost leaders in South America, which it certainly promoted by continuing its prominent status in Mercosur and Unasur. While mutual cooperation should continue to be the major format of its style, the South American giant should not shy away from taking on responsibility and the burden of being South America’s main power. Meaning that while Brazil often discusses important actions that should be taken, it rarely spearheads these initiatives. Mercosur is a perfect example of this trend, as the organization is Brazil’s best chance at rallying South America, yet it remains institutionally weak.[16] Brazilian authorities may want to increase military cooperation with the United States and Europe—a step that has already been taken with existing arrangements of various kinds with France, Spain, and the United Kingdom. The reality of international politics is that for the foreseeable future a relatively small number of Western nations will continue to play a major role in global crises. In other words, Brazil will have to change the reality of the situation wherein if the United States takes military action in hostile environments, Brazil will not be on the list of nations that Washington will inform their decision.

Brazil’s diplomatic power has given the country influence within the orb of international affairs, yet its overall military capacities are generally lacking. If Brazil wants to be seen as a global power, it must not only consider expanding its present orientation towards soft power, but also may want to reorient its geopolitical thinking in favor of South-South relations.

Luis Ferreira is a candidate for a Master’s of Public Administration at Cornell University.

[10] Hosting the G20, Mexico is ‘Greece no more’, The Christian Science Monitor.