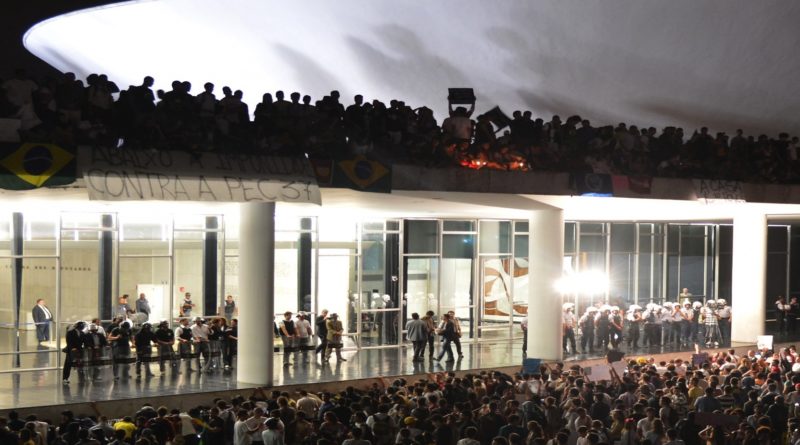 By Gabriel F. Barbosa, Research Associate at the Council on Hemispheric Affairs

The fact that Brazil needs to review its political system is undeniable. But so are the risks associated with making a bad system worse. In the first article of this series on the Brazilian electoral reforms currently under debate in Congress, we discussed the most important aspects of the proposals presented by Brazilian legislators. Now, we shall turn our attention to more profound, but often neglected, questions that are important to the understanding of the necessity to reform the Brazilian electoral system. Essentially, the debate over how to improve Brazilian politics needs to move beyond the current discussion around electoral bureaucracy, and toward amplifying mechanisms of public participation. To that end, there are two major misconceptions that need to be clarified in the discussion about political reformation in constitutional democracies.

First, political crises are often not a problem derived from politics as a societal means of organization. Rather, they are most commonly due to the lack of access to political participation. Furthermore, they are consequences of the absence of adequate institutional pillars necessary for politics, as an organic structure of human organization, to emerge and flourish with integrity.

Second, the current political crisis in Brazil is one of representation, not limited to Brazil alone, but one that is becoming increasingly common to westernized liberal democracies around the world.

A functional system of , at its core, could be summarized as one in which the members of a community participate in making decisions that affect the entire community as a unit. Politics requires engagement and active participation; it is a continuous enterprise that demands regular dedication, continuous deliberation, and constant participation of all stakeholders in the making of decisions that affect the community as whole.

However, any resolution derived from the community level is bound to influence one individual, one sector, or one group differently, especially if chances to express opinions are not evenly distributed during the decision-making process. Moreover, compromises and arrangements, which are agreed upon by competing factions, result from the ability of community members to take the time to participate in the deliberation process. If human beings are social beings endowed by nature with the power of speech and critical reasoning, as Aristotle asserts, then politics is simply a means by which individuals with common objectives organize themselves in debate.[i] Nonetheless, as professor argues, the dominant mode of today’s westernized constitutional tradition favors two sets of ideas. The first set looks at a constitutional form that fragments power and entices deadlocks, while the second set nurtures rules and practices which maintain communities at a relatively low level of mobilization.[ii] Such a set of ideas will grant or restrict access to participation based on the constitution, and distribution of rights among members of the community. Still, this is only possible when two congruent factors exist.

First, the opportunity cost of political participation must be low enough so that people can trade personal time in exchange for community related activities. Second, there must a tangible return for such participation. People must feel that their presence in the political process is, in fact, relevant. In contrast, the more civil society delegates its popular will to political representatives, the more the civil society will undermine its sovereign authority in the decision-making process. If we assume that people should be endowed with equal rights, they too should have equal access in the constitution of those rights.

When Mr. Michel Temer took office as de facto president in 2016, his promotional slogan read: “do not speak of crisis, work.”[iii] The underlying goal of the Temer administration has been, and still is, clear: to distract people from the ongoing political turmoil that brought him to power in the first place. If people are preoccupied with personal problems, like their daily labor, politics can become the last thing on their minds. This reflects the necessity of creating psychological barriers to distract the public from the nature of the political debate. Moreover, this tactic draws on the abstract reasoning that politics is a frivolous commodity that should only be left to those with the personal time or the material wealth to be able to deal with it – in other words, only the social and economic elites.

In order for people to take part in the political process, there must exist the proper institutions to lower the cost of political engagement while creating incentives for participation such as comprehensive systems of education, medical care, housing, and security, as well as an adequate system of economic opportunity and equity. When people are living paycheck to paycheck, or as the common saying in Brazil goes, “selling their lunch to buy their dinner,” the cost of political participation becomes high enough so that people are excluded from the political process. Much like business monopolies, political monopolies are constructed around barriers that prevent bottom-up competition in the political arena. Economic elites tend to monopolize economic activity by increasing the cost of participating in the market by lowering production costs, or taking advantage of existing contractual loopholes that restrict the rights to property for example. Likewise, political elites will attempt to create monopolies of their own by preventing competing factions from partaking in the political debate. Where participative restrictions exist, dominant factions can augment their influence by filling in for those who are not able to fully express themselves. In Brazil, evidence of this barricading by predominant elites is present in the way the judiciary branch is composed, where access is entirely based on performance on standardized academic exams.[iv] Consequently, admittance to this institution is dictated by Brazilians’ accessibility to a highly competitive and costly educational system, and worse still, the appointment of judges, prosecutors, and public defendants is done exclusively within the corporate structure. The elite class in this way perpetuates itself at the expense of the constituents. In contrast, in neighboring Venezuela, for example, the 1999 constitution gave community organizations the autonomy to appoint local government officials such as magistrates, counsels, and others.[v]

The Brazilian proportional representation system set up by the 1988 constitution was innovative, and had as its goal of quenching the thirst for democratic participation from Brazilians after 21 years of military dictatorship. In a pluralist, multicultural society like Brazil, a pure proportional representation system made sense in order to preserve the rights of minority groups, such as indigenous populations, long-excluded from the country’s political affairs.[vi] However, legislators in 1988 did not foresee the potential consequences that the system would bring 30 years later. During impeachment proceedings in 2016, only 34 out of 513 congressional deputies were elected by direct votes cast in their names.[vii] The remaining 479 were elected as result of the proportionate electoral system that gave undue weight to certain candidates over others.

Political scientist argues that maximum transparency is required for the functioning of a representative democracy. The representative must therefore fully reflect the will of the people he or she represents. In addition, they are expected to represent this will within a myriad of distinct wills from different sectors of the society, which may even be antagonistic among themselves.[viii] The problem in Brazil is that the country, after the military dictatorship in the 1980s, lacked a proper system of political transparency and accountability. Legislative elections are held with party lists where political parties select the candidates and their position within the list. Seats are then allocated according to the total number of votes received under the Hare quota according to the total number of votes relative to the total number of seats available in one constituency. Parties can form legislative coalitions to amass more votes without necessarily informing the voter of how the coalition would allocate votes within the platform. In addition, parties that form a coalition can increase their share of access to public funds for electoral campaigns. This can create an incentive for parties to be constructed on business models, rather than on ideological grounds. One party can “sell” their coalition support in exchange for additional public funds, cabinet positions, or congressional votes. In the nearly 30 years since the military dictatorship, Brazilian democracy went from having two to over 30 political parties.[ix]

There is growing resentment, in societies around the globe, of people increasingly feeling “left out” or isolated from the ideals of self-governance. This has generated great dissatisfaction with politics in general, which naturally tends to push people away from political processes. It is not enough for people to participate in politics if activism rarely translates into meaningful transformation, and voting diminishingly reflects popular demands. Limiting political participation to ballot voting under a predetermined electoral schedule distances the electorate and undermines the construction of a cohesive political platform. This can potentially result in a lack of accountability from candidates, as well as his or her constituency.

An interesting indicator of such responsiveness is found in the Latinobarometer, an annual study conducted with the support of the Interamerican Development Bank, the World Bank, and various Latin American governments.[x] According to this study, as of 2016, Brazil ranks as the country with the lowest support for democracy (as a system of government) in Latin America at 32 percent, second to Guatemala. More alarming, according to the same study, Brazil has seen, among Latin American countries, the largest percentage increase in political disenfranchisement from 23 in 1995 to 42 percent in 2016.[xi] Furthermore, Brazil reported the lowest rates of satisfaction with democracy in the region with numbers varying from one to two percent in the last 15 years.[xii]

In Europe, the signs are just as grim. A recent study released in May, conducted by Germany-based TUI Foundation and YouGov, surveyed 6,000 people between ages 16 and 26 in seven European Union countries – France, Germany, Greece, Italy, Poland, Spain, and the United Kingdom – about their views on the E.U., support for democracy as a system of government, perspectives on the economy, and more.[xiv] Overall, the study reports that only 52 percent of young Europeans regard democracy as the best form of government. In France, only 42 percent regard democracy as the best system of .[xv] Not surprisingly, a few days after the results from the survey were published, the French presidential election would have its lowest turnout at the poll since 1969.[xvi] In June, only a month later, France would go on to record the lowest in its modern history, when only 48.7 percent of the electorate showed up at the polls.[xvii]

There are signs that indicate that multiparty political contestation in representative westernized democracies is reaching exhaustion. The increasing gap between political representatives and their respective constituents attests to an augmenting lack of accountability fostered under the current Brazilian political system. Instead of bridging this gap, political elites have insisted on creating mechanisms that distance themselves from the public while monopolizing political power. Brazil is just one example of the struggle faced by modern republics. But instead of focusing on mechanisms of procedural details, the country needs to assess the foundational problems that are embedded in its constitutional construction, magnify the amplitude of political discourse, and reduce the distance between citizens and representatives, while creating more concrete alternatives for direct participation.

By Gabriel F. Barbosa, Research Associate at the Council on Hemispheric Affairs

[x] Latinobarometer surveys annually from 1,000 to 1,200 people in each Latin America country regarding systems of government, sentiment towards political institutions, and economic perceptions.

[xi] Latinobarometer questionnaire includes the following answer in regards to the question about support for democracy: “for people like me, it doesn’t really matter whether we have a democratic or non-democratic regime”.