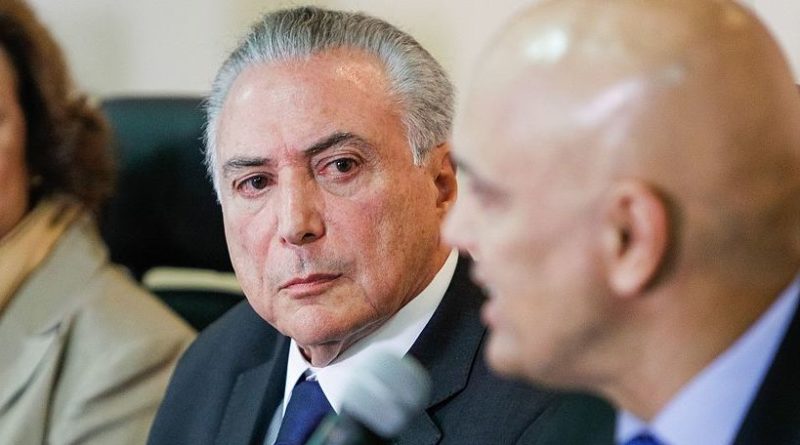 “The Rule of Law is a multi-faceted ideal, but most conceptions give central place to a requirement that people in positions of authority should exercise their power within a constraining framework of public norms rather than on the basis of their own preferences, their own ideology, or their own individual sense of right and wrong.” – Jeremy Waldron[i]

On Wednesday, February 22, the Brazilian Senate confirmed Alexandre de Moraes as the newest member of the Supreme Court, leaving little doubt that Brazil, once again, is witnessing the country’s rule of law being torn apart.[ii] The tragic plane crash that killed Justice Teori Zavascki opened the path for the country’s unelected President, Michel Temer, to nominate another Justice for the Supreme Court.[iii] And his choice could not be more controversial. On February 6, the President’s spokesman, Alexandre Parola, informed the public that Temer had appointed his Minister of Justice and Public Security, Alexandre de Moraes to fill Zavascki’s vacancy in the Supreme Court. [iv] A close ally of the PSDB (Brazilian Social Democracy Party, Partido da Social Democracia Brasileira), Moraes will have an important role in Operation Car Wash, the agency that investigates a corruption scheme involving a number of key Brazilian political and business figures. His choice has been seen by many as another step to shield corrupt political figures from the investigations, further eroding the already fragile legitimacy of the country’s Judiciary.

Who is Alexandre de Moraes?

A former public prosecutor from the state of São Paulo and law professor, Moraes’ career as a public figure has been meteoric – and has allowed him to gather a significant fortune along the way.[v] He served as São Paulo’s municipal secretary of Transportation from 2007 to 2010. He also worked for Geraldo Alckmin, governor of São Paulo for the PSDB. On two occasions, he served as the São Paulo governor’s aide, and most recently, as head of the Public Security Secretary (2014 to 2015), and as well as head of the Justice and Defense Secretary (2002 to 2005), a position that he renounced to assume a seat in the National Council of Justice (Conselho Nacional de Justiça, CNJ), a public institution in charge of holding the Brazilian Judiciary System accountable. Shortly before assuming his position in Temer’s cabinet, Moraes defended Eduardo Cunha (PMDB-RJ), former speaker of the Brazilian Lower House, in a case where he was accused of falsifying documents. Cunha, in turn, played an important role in putting forth Moraes’ nomination as Minister of Justice.[vi

In all of his public capacities, Moraes has left a legacy of violence, incompetence, and chaos. During his term as São Paulo’s Secretary of Public Security, he manipulated the city’s homicide rates to portray a scenario far from its reality. Under his guidance, the military police acted with extreme violence, being responsible for one in every four cases of homicide being witnessed in the state.[vii] He criminalized social movements and student protests. Moraes also permitted, for the first time in São Paulo’s history, the use of Israeli-manufactured tanks to suppress peaceful demonstrations.[viii] As Minister of Justice, he diverted money from public accounts to create his own police force; he publicly lied about offering aid for the containment of Roraima’s penitentiary chaos and anticipated, in a campaign event, what would be the next steps in Operation Car Wash.[ix] In his time in office, Brazil reversed legislation supporting indigenous rights that had been conquered in the past decades. His tenure also saw one of the most violent prison riots in Brazil’s history. While he was on leave from his position as Minister of Justice, he was informally “questioned” over a fancy dinner with many of the senators who voted for his approval. Likewise, Brazilians saw the State of Espírito Santo being engulfed in chaos.[x]

Moraes has been a member of PSDB since December of 2015. But according to political scientist Fernando Almeida, that is not the most disturbing aspect of his nomination: “the problem of Moraes’ nomination is precisely that of the political instances, as well as legal theses, and interests that he represents, whether or not he is affiliated with a party. He has already shown himself as someone authoritarian, even truculent, with little concern for human rights […]. [He] is a nominee who comes from the core of an illegitimate government, with a conservative reform agenda and highly implicated in the Car Wash [Operation]. In other words, in addition to having highly questionable general political positions, which must be democratically questioned, he is linked to immediate and minor direct political interests, which disqualify him as minister and as a member of the Supreme Court, especially at a time like this.”[xi] Besides his political agenda, Moraes was also being challenged by his lack of regard for Brazilian Constitution and accusations of plagiarism in his Ph.D. thesis.

Moraes’ appointment has been seen by many as a crucial move to prevent the corruption investigation from “bleeding out” the Brazilian political establishment – as predicted by Temer’s former minister and now senator, Romero Jucá of  the Brazilian Democratic Movement Party (PMDB), who was caught on tape planning a “national pact” to stop the investigations that would involve, among other steps such as putting Temer in power, the Supreme Court.[xii] According to journalist Jeferson Miola, Moraes’ nomination “is part of the rebuilding of the putsch’s block to stifle Operation Car Wash and protect the PSDB, the PMDB, and the allies mentioned in the statements of the contractors that were kept under secrecy by General Attorney Rodrigo Janot.” [xiii]

Coincidently, Janot, who is the general attorney in charge of supervising the Car Wash proceedings, recently issued an official petition that the composition of Temer’s government had, at least to some extent, the intention of protecting the “criminal organization” that was under investigation. He asked for the opening of criminal proceedings against, among others, Senators Romero Jucá and Renan Calheiros, both from the PMDB – and who were both closely related to Moraes’ nomination. [xiv] It is worth mentioning that 13 of the 81 senators currently serving the Brazilian Senate are under investigation in the Car Wash proceedings, while others have been cited in depositions regarding the corruption scheme. The majority of them voted for Moraes’ approval.[xv]

According to existing Brazilian legislative procedures, Moraes will automatically be the Operation Car Wash process reviewer. In that role, he will be able to review “the work of the [Car Wash] Rapporteur and confirm it […]. In general, it is a rather bureaucratic function. On the other hand, it is worth mentioning that in the judgments of the Supreme Court’s plenary, the reviewer is always the second to declare the vote, shortly after the rapporteur, which is important, because he is the first to confirm or disagree with the position of the rapporteur”, and may be a positive influence for other votes.[xvi]

Although there is not a mandated timeframe or schedule for the approval of the Supreme Court nominee, the rapidity of Moraes’ process, which was set to be done with before the celebrations of the Carnaval, has raised many questions. And journalist George Marques reminds us why: Janot had pledged that, after the Carnaval, he would withdraw the secrecy of all the testimonies of Odebrecht’s executives, which will most likely implicate many members of the current government, including Temer himself.[xvii] There could not be a more convenient choice for Temer’s illegitimate government than Moraes. Moraes can simultaneously strengthen Temer’s alliance with the PMDB, save many of his allies from further investigations and, on top of that, deepen the attack against progressive forces in the country.

The Rule of Law seems to be a rather fluid concept overall, but in Brazil, its fluidity is now taken to another level. As Igor Drumond, a Brazilian attorney and writer, reminds us, “Brazilians never had more than 30 years of democratic stability; […] they never thought on Law (Rule of Law) as the origin and constraint to the use of power by authorities in a constitutional democracy. Now it doesn’t matter anymore since we can say that there’s no such thing as Rule of Law in Brazil […].”[xviii]

If there are not any changes in the current legislation, Moraes will serve in the Supreme Court for up to 30 years – a constant reminder of the long-term consequences of the coup that ousted Rousseff. His approval reaffirms, once more, the notion that the illegal impeachment of President Dilma Rousseff was just one small piece of the puzzle crafted to put an end to a bundle of corruption investigations. Without a doubt, this decision could go down in history as another perverse act of an illegitimate government that seized power with little more of an agenda than protecting their own interests.