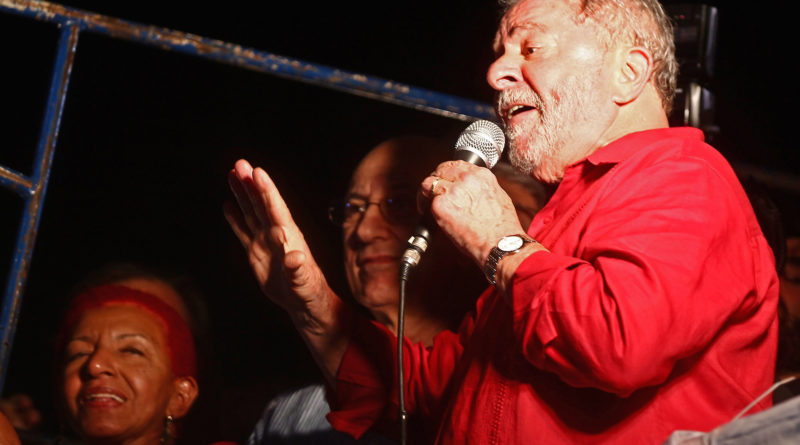 By Keith A. Carr, Research Associate at the Council on Hemispheric Affairs

On January 24, an appellate court in Porto Alegre ruled to uphold the controversial conviction of former Brazilian president Luiz Inácio “Lula” da Silva for passive corruption and money laundering, sentencing him to 12 years in prison.

The ruling, although expected, has further shaken up the already uncertain 2018 Brazilian presidential election. As a result, Lula is potentially ineligible to take office, despite having been an early favorite in the race. He still leads the polls at 34 percent, more than twice the figure for his closest competitor, the far-right Jair Bolsonaro.

Although discouraging, Lula’s conviction does not necessarily prevent him from running in the next elections and his candidacy could still be approved by an electoral court. Brazil has a Clean Record Law (Lei da Ficha Limpa) that prevents candidates whose sentences are confirmed by an appeals court from taking office; however, he can continue running a campaign while he seeks an overturn of his conviction.

In the face of his still plausible, yet unlikely eligibility, Lula’s support has not wavered since the conviction. The former president undeniably has status as a national hero; in fact, the image of a persecuted underdog could effectively mobilize his base. Many believe that his trial was patently unfair and founded on insignificant evidence. The vast majority of Brazilians are appalled by their government’s corruption, and to some, Lula could be a symbol of the failures of the establishment. That said, should 35 percent of the population still believe in him come election day, eligibility would be the only barrier to his presidential aspirations.

If Lula is forced out of the race, the biggest question is where the former president’s voters would turn. The Partido dos Trabalhadores (Workers Party, PT) continues to back Lula as its candidate, so an alternate PT candidate is not yet being posed, but a contender may arise in the following months if it seems that Lula will not be able to clear his charges in time to run. Either way, the narrative of Lula’s persecution could be a powerful asset for the PT, even in backing a new candidate.

A recent poll by Datafolha suggests that some – but not all – of Lula’s supporters would migrate to the center-left, environmentalist candidate Marina Silva, bumping her from 8 to 16 percent of the vote and giving her a technical tie with Jair Bolsonaro at 20 percent.

What happens in the lead-up to October will be far more decisive than polls can anticipate. Speaking at a Latin American Policy Organization (LAPO) panel on November 30, former Eurasia Group Latin America Director and GWU professor Dr. João Augusto de Castro Neves noted that the strongest contenders may not be obvious until March or April. After the pool is narrowed to two candidates on October 7, the dynamic will shift again for the final round on October 28.

This is where contenders currently stand:

Marina Silva has been the third-most popular candidate during the last two presidential elections. She was Minister of the Environment under Lula from 2004 until her 2008 resignation over concerns about sustainability in the Amazon. She broke from the PT for her last two races and will run this cycle with Rede Sustentabilidade (Sustainability Network), a centrist environmentalist party that she founded. Another Lula appointee, former Supreme Court Justice Joaquim Barbosa, has yet to definitively enter the race, but could also benefit from the splitting of the PT vote.

Despite the predictions of the polls, Silva’s real chances are somewhat dubious. Silva would be the first black and evangelical president of Brazil, yet she does not dominate support of either demographic. Lula’s success story as Brazil’s first president from a background of poverty provided a powerful narrative for drawing support, while Silva has a history of losing many of her black voters. Her inability to connect to such demographics does not bode well for her ultimate chances.

Likewise, while religious affiliation only informs the decisions of two out of 10 voters in Brazil according to Datafolha, the evangelical bloc has strengthened in recent years. Silva has struggled to benefit from this support. In 2014, she decided to rescind her support for gay marriage to appeal to a fractured evangelical base, but in doing so she sabotaged her support among progressive and LGBT voters. As surmised by Dr. Castro Neves, Silva has tried and failed to please everyone.

Such a tactic will be even more difficult to execute at this moment of polarized politics. In order to beat Bolsonaro, Silva will need to offer a strong alternative vision for Brazil, rather than appear weak or conciliatory.

If not Lula, Bolsonaro may be the candidate to beat in 2018. A Federal Deputy from Rio de Janeiro, he has risen to national prominence due to his vitriolic attacks on women, blacks, indigenous communities, and LGBT people.

His offenses have been well-detailed elsewhere, from America’s Quarterly to The Intercept, where Brazil-based journalist Glenn Greenwald named Bolsonaro the most misogynistic, hateful elected official in the democratic world, a pointed exaggeration, but not one devoid of truth.

Despite, or perhaps due to such noxious behavior, Bolsonaro has gained crucial support among 18-25 year olds and a sizable online presence. He boasts over 5 million Facebook followers, 2 million more than Silva or Lula. Bolsonaro will not be handed the  election by the mainstream media or political elites who oppose him, but his aggressive appeal among a specialized demographic is a force to be reckoned with, as he currently leads the polls at 20 percent, if Lula is excluded.

Virtually all major parties would like to see Bolsonaro lose, which could in fact be a boon for his popularity. While lacking support from the PT, Movimento Democrático Brasileiro (Brazilian Democratic Movement, MDB), or Partido da Social Democracia Brasileira (Brazilian Social Democracy Party, PSDB) may have hurt other candidates in the past, Bolsonaro’s rejection from the established political elite might attract many Brazilians who are fed up with the country’s corrupted leadership, especially those who fault Lula for his role in this trend. However, if Lula is out of the race, Bolsonaro loses the foil against which his outsider image is typically contrasted.

Bolsonaro’s main selling point is his obsessive emphasis on strict law and order. Brazil has an extraordinarily high homicide rate, mostly due to gun violence. A strongman who advocates torture and police brutality has an unfortunate appeal in times of chaos.

But there’s hope that the majority of Brazilians will pay more attention to his political record. In 26 years in Congress, Bolsonaro

Under him only two pieces have been has only passed two pieces of legislation. He has often admitted he knows little about economics and intends to delegate such details to his advisors. His admiration for Brazil’s military dictatorship seems to exceed such practical knowledge. This was illustrated best by a comically embarrassing television interview in which a reporter was shocked at Bolsonaro’s claim of great economic success under the dictatorship of 1965 to 1985, in which debt and inflation were out of control.

Will practical failures by a militant bigot turn such potential voters away? This remains to be seen. His interview gaff was widely circulated in social media, but Bolsonaro tends to communicate directly via rallies, creating a veritable closed circuit for devoted fans. This is what gives Bolsonaro early backing in the polls but could also be his greatest limit: although his supporters rally in great displays of loyalty, this diehard core will be hard to grow into a majority. If Bolsonaro is to move beyond his already convinced true believers, he will need to make a convincing argument to a wider spectrum of Brazilian voters.

Geraldo Alckmin and other major-party politicians

The center-right PSDB has tapped former São Paulo mayor Geraldo Alckmin as its potential candidate. Alckmin holds only 8-9 percent of backing in the polls, with or without Lula in the race, yet should a major party candidate score a victory in the election, Alckmin could very well be the one.

According to at least one poll, 59 percent of Brazilians would like a president from outside of the three major parties: the PT, the PSDB, and de facto president Michel Temer’s MDB. Lula’s exceptionalism might break with this tendency, but the current lack of faith in the political establishment, engendered by recent revelations of corruption in the last few years, will be a serious hindrance to candidates like Alckmin. Voters may not forget that PSDB’s last candidate, Aecio Neves, is still under investigation for corruption, an image that Alckmin will have to dispel.

Other conservatives such as Finance Minister Henrique Meirelles, a potential candidate from the right, believe that Lula’s ineligibility would depolarize the election and allow for an establishment coalition to form. That may be be a difficult task to put into effect with the current pessimistic mood of the nation and the fact that many parties are attempting to distance themselves from the unpopular Temer’s MBD.

What remains to be seen

Unlike in the United States, Brazilian presidential candidates do not start campaigning two years prior to an election. Normally, there is ample time for politicians to drop in or out of the race. With each known candidate on such tenuous footing, a newcomer could still earn a respectable chance before October. According to an IDEIA poll last July, 52 percent of Brazilians claimed that only someone who has never been a candidate for any political position could really bring renovation the current state system – a complaint that resonates across the hemisphere, having elected other such caustic non-politicians such as Donald Trump in the United States and Jimmy Morales in Guatemala.

2018 will be a consequential election for Brazil. Some Brazilians face outright harm as a result of these fateful decisions, be they political repression, civil violence, or the loss of vital social goods and territory. For those who contest the legitimacy of their current government, the fear persists that the election will fall subject to the same conservative forces that sought to impeach Dilma and bar Lula. If Lula is indeed unable to assume office, the right will have succeeded in denying the public its first choice and splintering the vote for the left.

Yet there is a long road ahead until October. New candidates may enter the scene and others may exit or be forced out. What we hope for the Brazilian people is that they may make these decisions without unscrupulous control from the establishment at large. Let us hope for an election which brings restoration, rather than the renewal of creeping injustice.

An earlier version of this article was published by the Latin American Policy Organization.

By Keith Carr, Research Associate at the Council on Hemispheric Affairs