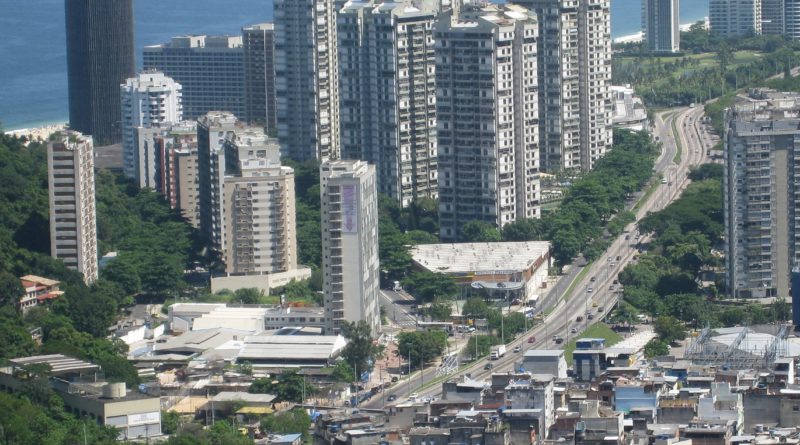 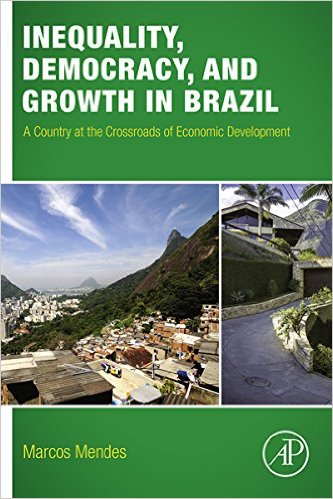 Marcos Mendes’ Inequality, Democracy and Growth in Brazil: A Country at the Crossroads of Economic Development is an alluring book for understanding Brazilian political economy, the country’s divisive set of persistent economic and social inequalities, and the compounding crisis that rivets the front page.[1] Mendes wants to explain the low growth that began in the “lost decade” of the 1980s and continues into the twenty first century. His book sheds some light on Brazil’s current recession, the Petrobras kickback corruption scheme (known in Brazil as the Lava Jato or Petrolão),[2] and how the country’s representative institutions have too often worked against the conditions for sustainable, equitable growth. Mendes argues that weaving inequality with democracy chokes the potential for economic growth.  Too much “rent-seeking”[3] and too many government subsidies create market distortions and economic inefficiencies that suffocate a more efficient marketplace.

Accordingly, Brazil suffers from a “political bottleneck” squeezed by democracy and inequality that leads to a condition of “dissipative redistribution” wherein

“there is some income distribution for the poorer, however economic resources dissipate, be it by economic inefficiency that results from redistributive policies, be it by appropriation of part of the public resources by those of high and middle income, which refrains redistribution and raises fiscal and economic costs of a given reduction in inequality (p. xxiv).”

Dissipative redistribution brings about a host of economic and social symptoms such as “lagging education” and “public expenditures of questionable quality” among others (p. xxv).  Mendes argues that these outcomes are “symptoms or proximate causes for low growth (p. xxv).”

Inequality, Democracy and Growth in Brazil: A Country at the Crossroads of Economic Development is organized around ten “stylized facts” that express the empirical dimensions or “symptoms” of dissipative redistribution in Brazil. They include:

These facts are not in dispute. Mendes describes each and then argues how they might discourage investment and innovation. He moves on to an examination of income distribution, rent seeking, and government transfers for three broad socio-economic groups, the rich, middle class, and poor. His analysis examines how redistributive policies, some responsible for reducing poverty and inequality, may undermine fiscal stability and erode the conditions for private sector growth. The descriptive analysis of each socio-economic group is worth every reader’s attention, but it does not constitute a complete casual analysis to explain low growth in Brazil.

Mendes argues that the rich engage in aggressive rent seeking by undermining the efficacy of the judicial system and holding regulatory agencies captive in order to advance particular and private interests.  He draws from the colonial legacy

“where the first great beneficiary of rents was the Portuguese royal family and its associates that used colonial economic activities to fill their coffers (p. 110).”

For Mendes, colonialism in Brazil was replaced with a republican state that leaned toward elite interests by protecting and subsidizing wealth at the expense of inequality and pervasive poverty.  Centuries later “rent seeking behavior and extractive economic regulation” continue to fuel a

“vicious cycle of inequality, exclusion and low, long-term economic growth. In this scenario, the richer social groups have found fertile soil to harvest income from their relations with the state (p. 114).”

Mendes continues with an examination of the economic fortunes of the middle class. The author reveals how social security and educational policies favor largely middle class public sector retirees and subsidize higher education at the expense of a majority of Brazilians who cannot afford to prepare their sons and daughters for acceptance to the “free” federal university system. He decries the power of public sector labor unions and their collective bargaining practices, including long strikes, as a form of rent seeking. He argues that government

“is incapable of imposing sanctions on striking civil servants, leaving little to do but attend the demands presented or see the popularity of government leaders fall during the time the servants are on strike and public services are discontinued (p. 194).”

Consequently, the Brazilian middle class is over reliant on government subsidies and this contributes to dissipative redistribution.

Mendes’ analysis leaves no one behind.  He argues that raising the minimum wage and imposing labor laws “reduce the profitability of companies and, as such, reduce the incentive to invest (p. 156).” He argues that labor market regulation and direct transfers to the poor

Mendes’ turns to politics to presume,

“Due to their great number, the poor are one of the politicians’ favorite groups. Therefore, redistribution in their favor will occur in a democracy where inequality and poverty are high. The more numerous the poor, the more they attract attention by politicians (p. 157).”

This proposition is suspect. Everyone is to blame, including the poor, under Brazilian democracy. Mendes does not suggest that Brazilian democracy should be replaced. Rather he offers a recipe book of sensible policy recommendations in the last chapter, policy changes that might strengthen democracy and sustain economic growth with equity in the long term. Improving educational outcomes and building more productive infrastructure will bear greater productivity and growth. Reforming the social security system to squeeze out its income concentrating effects will contribute to fiscal stability. Agreed, but Mendes proposes that the black box of politics holds the causal link between dissipative redistribution and low growth. This argument will not satisfy careful, critical readers.

Understanding Brazil’s economic development requires greater attention to the political institutions responsible for formulating public policies that restrict or realize the potential for economic growth. Pointing to “political bottlenecks” as the causal trigger for low growth raises questions about the role of politics and the impact of political institutions on development.  For example, what role does corruption, including tax evasion, play in concentrating wealth and undermining the long-term fiscal stability of Brazilian government? Does Brazil’s political party system, including the presence of approximately 30 parties in the national congress, erode the conditions necessary for the composition of majoritarian legislative coalitions that maximize social welfare (and long term fiscal stability) and minimize the costs (pork barrel, excessive executive appointments, and lack of appropriate executive branch oversight) of legislation? That is, what prevents the Brazilian executive and congress from aggregating policy preferences across society to formulate effective and fiscally responsible public policies that grow the economy and lessen inequality? Is Brazilian democracy dependent on an unwritten “social pact” that tolerates rent seeking and requires complex and extensive government transfer programs to guarantee governability? Mendes points to the political then sidesteps it.

Mendes’ book is grounded to economic theory. Nevertheless, he ignores the external, economic constraints to Brazilian economic development with the exception of stylized fact #7: Brazil’s trade policies are too protectionist. Mendes does not detail a description of Brazilian growth trends before and after the transition to democracy or before and after the global financial crisis that imposed a three quarter recession on Brazil in 2009. He disregards the high growth period of 2004 to 2008 (4.7 percent annual growth) and its sources in the high historical prices for Brazilian export commodities and the rising purchasing power of Brazilian workers during this period.[4] Mendes also fails to isolate the effects of the global financial meltdown as proximate causes of economic stagnation and recession in recent years. To explain growth we have to correctly describe it first.

The sources of Brazilian above average growth from 2004 to 2008 were neutralized by a devastating cut punch to international trade and commodity prices thrown by the global financial crisis. The Brazilian government’s initial counter-cyclical stimulus spending and capital controls following this external shock led to a 7.5 percent growth rate in 2010, but such policies could not be sustained under the weight of the global economic downturn, falling demand and investment, and the accumulating fiscal pressures that Mendes does note.

Brazil’s recent slow growth and current recession follow a regional trend. According to the International Monetary Fund, projected growth rates have declined every year in Latin America, especially for those countries with large commodity export profiles.[5] This regional outcome undermines the explanatory power of dissipative redistribution and raises an important question. Can we explain Brazilian economic development and growth without a full understanding of how the global political economy shapes both market actors and policymakers in Brazil?

No, but Mendes does make an important contribution to our understanding of the complexity of redistributive policies in Brazil and how they may shape economic and social development. The rest is up to us.

[2] For a review of the major politicians under investigation see Esther Fuentes. “Who is Who in Brazil’s Complicated Lava Jato Corruption Allegations?” Council on Hemispheric Affairs. March 17, 2016 and accessed at:https://www.coha.org/who-is-who-in-brazils-complicated-lava-jato-corruption-allegations/.

[3] According to Mendes, “In Brazil a strong stimulus has been created for the rent-seeking behavior, where each group tries to extract the maximum possible benefits for itself, while at the same time tries to push the cost of public policies onto others, escaping taxation (p.p. 63).”