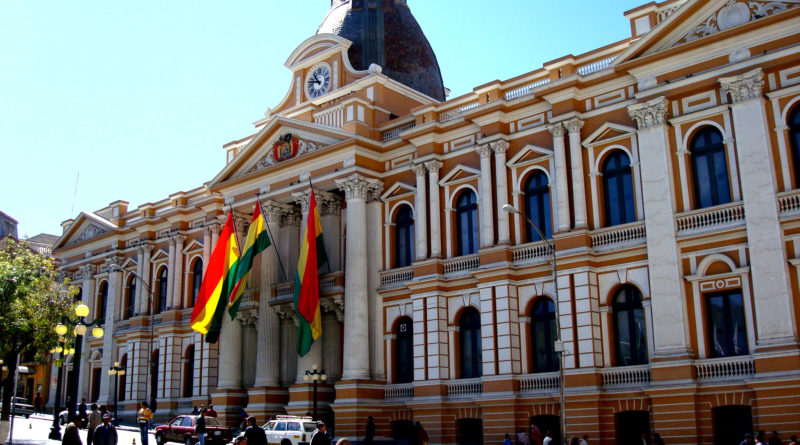 By: Stephan Horler and Henderson Roman, Research Associates at the Council on Hemispheric Affairs

In November 2015 Bolivia’s Congress rallied the two-thirds majority vote needed to approve a referendum seeking constitutional reform of Article 168, to allow current president, Evo Morales, to run for a second consecutive re-election, or a third five-year term. Article 168 previously stated that a president may seek re-election only once. [1] At this time, President Morales’ political party Movimiento al Socialismo (MAS, Movement for Socialism), advocated for the referendum’s approval and supported the possibility of re-electing Morales in 2019.[2] Opposition had been growing against the referendum from those who did not want to see Morales serve yet another term, seeing the proposed extended tenure as a threat to democracy.[3]  The popular consultation was held on February 20, 2016, with a simple “Yes” or “No” mandatory ballot. The surprising result was that 51.3 percent majority of Bolivians who voted rejected extended tenure.[4]

President Morales and his administration have not been shy about using constitutional reforms to advance their political agenda. According to Bolivian Constitutional Law, a referendum can be approved in one of two ways: by a petition of 20 percent of the electorate or by an absolute two-thirds majority of the Legislative Assembly.[5] For a Constitutional reform to be put into effect, a nation-wide vote must be held and receive a simple absolute  majority.

In 2009, President Morales amended Bolivia’s constitution by winning a simple majority of 61.43 percent in an election with 90.26 percent voter turnout. This amendment (covered in more detail by COHA in “Bolivia: Evo Morales Moves to Centre Stage for Historic January 25th Referendum”) emphasized increased autonomy for regional and local governments, land distribution, and established rights for Bolivia’s indigenous population. The same referendum also allowed for Article 168 to be amended—the article in question now.[6] After his success with the 2009 referendum, President Morales won his second election on December 6 of that year. Previous presidents in Bolivia had been limited to one five-year term, but the 2009 amendment enabled President Morales to run a second time. It also reset his previous term so he was eligible for further re-election in 2014. These successes and the previous extension of his presidency established the precedent Morales invoked for his most recent attempt to extend his possible tenure.

These amendments proposed by President Morales are reminiscent of similar attempts in other Latin American nations. The Brookings Institute’s Daniel Zovatto cites former Latin American leaders such as Alberto Fujimori in Peru (in 1993), Carlos Menem in Argentina (in 1994), Fernando Henrique Cardoso in Brazil (in 1997), and the late Hugo Chavez of Venezuela (in 1999) as having used political maneuvers similar to Evo Morales’ referendums to remain in power.[7] For his  part, President Morales had promised at the time of the 2009 constitutional reform that he would not run for office again in 2014, a vow that he broke. Again he promised not to seek re-election in the 2019 elections, but recent history makes it hard to take him at his word.

The Vote for Yes

Supporters of the “Yes” campaign have cited Morales’ need to complete his proposed agenda as the root for their support. In 2014 the government’s program was laid out in Patriotic Agenda 2025, an ambitious plan to reduce poverty and ensure basic services for all Bolivians through massive investment in hydrocarbons, other energy initiatives, agriculture, mining, science, and technology.[8] This initiative has been popular and successful, and many Bolivians attribute the country’s economic boom to Morales’ policies and fear the uncertainty and possible economic backlash once he steps down. “Yes” campaign supporters also suggest that if Morales is replaced, Bolivia may return to a U.S.-backed neoliberal regime which would undo his administrations’ successes and the country’s advances. Bolivia currently boasts one of the strongest economies in Latin America, fueled by unprecedented levels of public investment.[9] According to United Nations data, Bolivia’s GDP grew from USD $13.32 billion in 2006 when Morales first took office as president, to USD $33.09 billion in 2014.[10]

The Vote for No

Supporters of the “No” campaign fear the implications of allowing Morales to run yet again. Extending presidential term limits, they say, violates the traditional Andean concept of leadership rotation, and would serve only to perpetuate autocratic tendencies within the MAS that preclude new leadership development.[11] For “No” campaign adherents, Morales has held power for long enough and three terms would be too long.[12] The “No” campaign is not necessarily against socialism or the MAS directly, but it opposes the practice of one party’s monopolizing the national politics and the presidency for an extended period.

“The political constitution of a country is sacred,” said Antonio Gomes, a “No” campaigner speaking to Latin Correspondent in the city of Cochabamba. “You can’t touch it. You can only change it for the good of the population.” [13] Some “No” campaigners fear that if Morales remains in power too long and is allowed to manipulate the Constitution he and his party could grow to resemble a Castro-style political monopoly.

Implications of the Results

The outcome of this vote signifies that President Morales is no longer eligible to seek re-election in 2019, hereby ending his almost 15 years of rule. Although the referendum’s aim was amending the Constitution, it can be seen as a popularity contest specific to Morales. In a shocking turn of events for the MAS, the referendum was turned down, albeit by a slim majority.[14] The defeat marks Morales’ first electoral loss since his rise in Bolivian politics in 2005. Although he still enjoys vast support, recent scandals and political fears of one-party rule may be undermining him. The referendum’s outcome does not necessarily mean the end of Morales’ political presence. MAS supporters continue to vastly outnumber the supporters of other parties throughout the country. Even if Morales is no longer able to be president himself, he will likely maintain a leadership role in the MAS, with his endorsement a big help for candidates in the next presidential election. What future role the 56-year-old leader takes in Bolivian politics and who will succeed him are unknown, but his legacy is sure to be strongly felt after he leaves office in 2019.

By: Stephan Horler and Henderson Roman, Research Associates at the Council on Hemispheric Affairs

[7] Zovatto, Daniel. “Slaves of the People or the Institutions.” Editorial. Brookings, September 25, 2015. http://www.brookings.edu/research/opinions/2015/09/29-bolivia-people-institutions-slaves-zovatto

*A previously published version of this article titled “Bolivia’s 2016 Referendum: A Tragic Defeat for Morales” had an error with the citations and mistakenly stated that a constitutional referendum could be initiated by the president in Bolivia. We thank our readers who pointed these mistakes out to us.