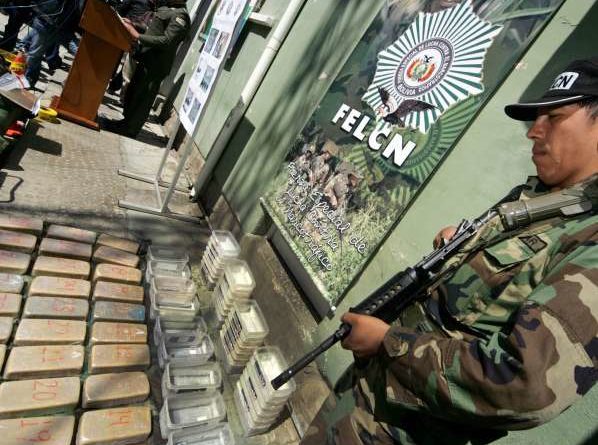 Foreign Minister of Colombia María Angela Holguín announced on June 7 that she has intelligence regarding the presence of Colombian drug cartels in Bolivia,(1) to which Bolivian President Evo Morales pleaded ignorance.(2) The increasing pressure from international drug cartels throughout Bolivia has elicited concern among several regional leaders, such as Ruben Costas, governor of the department of Santa Cruz, who fears that Bolivia will become another “Ciudad Juárez.”(3) This dilemma is in no way novel, but also of no small importance. While Morales has downplayed the issue, as economist Carlos Toranzo Roca observes, it is the government’s responsibility to “eliminate the problems of the country that are devouring citizens’ everyday life.”(4)

Foreign Minister Holguín asserts that Colombia’s success in the war against drugs has forced drug traffickers to disseminate their product in neighboring countries,i especially those characterized by “friendlier operating environments.”(5) As John Lyons from Inter-American Security Watch argues, the governments of Venezuela, Peru, Ecuador, and Bolivia have failed to effectively combat drug trafficking within their respective borders,v making those areas attractive for traffickers.

In 2010 Governor Costas accused high government officials of the Bolivian government, including Vice President Alvaro García Linera, of involvement with drug trafficking,(6)and in the last four years some individuals related to the Morales administration have been found guilty in Bolivian and U.S. courts of colluding with cartels.

For example, one corruption case concerned Margarita Terán, a coca grower and constituent of Morales’ political party, Movimiento al Socialismo, authoring a section that protects coca growers’ rights of the amended Bolivian constitution. Two of her sisters were caught in 2008 with 300 pounds of “semi refined cocaine” at a police roadblock.v Another high-profile case involved Valentin Mejillones, the shaman who swore President Morales into office and served as his personal spiritual mentor. Mejillones was arrested in 2010 for having more than 500 pounds of liquid cocaine—a concentration of cocaine plus ether—in his home.(5)

Perhaps the most-often cited scandal concerning the Bolivian government occurred in 2011. The former chief of Bolivia’s anti-narcotics police and close Morales confidante, Rene Sanabria, was sentenced to 14 years in prison for cocaine trafficking by a U.S. district judge in Miami(7). Conversations recorded by the U.S. Drug Enforcement Agency (DEA) reveal that Sanabria was a powerful man who was able to recruit other Bolivian officials to smuggle cocaine out of the country. In discussions with DEA undercover agents, Sanabria said, “at any time, we can resort to other people at the top…from the command structure to the highest in the institution or any political group that will allow us to get it done.” His frustrated plan dealt with smuggling more than 300 pounds of cocaine from Bolivia into Miami.(7) Sanabria’s testimony raises red flags as to whether the Morales administration’s officials are involved with the production and transportation of illicit drugs.

In July, Brazilian news magazine Veja, allegedly gained access to a Bolivian intelligence report that linked Bolivian Presidency Minister Juan Ramon Quintana with Brazilian drug lord Maximiliano Dorado Munhoz, a man “accused of shipping up to 500 kilos per month of Bolivian cocaine” to Brazil.(8) Veja reported that opposition Senator Roger Pinto presented information about Quintana’s involvement with Dorado to President Morales on March 21 “only to be accused of corruption himself.”(8)

The Brazilian government awarded political asylum to Senator Roger Pinto,(9) who claimed harassment and political persecution at the hands of the Morales government in reaction to his alleged “evidence of corruption and links to drug trafficking at senior levels of President Evo Morales’ government.”(10) By granting him political asylum, Brazil officially recognized the issues it has with the Morales administration’s handling of cases that involve the country’s criminal justice system.  The Bolivian government should not use its executive powers to silence those who are speaking against drug trafficking, but instead recognize the country’s vulnerability to drug lords, and fight against the production of drugs within its borders.

As the 2014 presidential election approaches, President Morales will surely receive harsh criticism from his opponents on the issue of drug policy. In order to affirm his administration’s stance on drug trafficking, Morales must become actively engaged in the war on drugs. He should implement drug policies that align with international procedures and identify corruption within the government. Morales should urge Bolivian Minister of Transparency and Corruption Nardy Suxo to identify members of the government involved in drug trafficking—if there are any—in an effort to eliminate corrupt individuals who could jeopardize his campaign.

Even though the United Nations has recently issued a report that maintains that drug cartels are non-existent in Bolivia, it assured that there are groups of organized crime dedicated to drug trafficking that are “as or more efficient than cartels”.(11) This problem is on the verge of intensifying, and the first step in addressing it is to acknowledge that the problem exists.