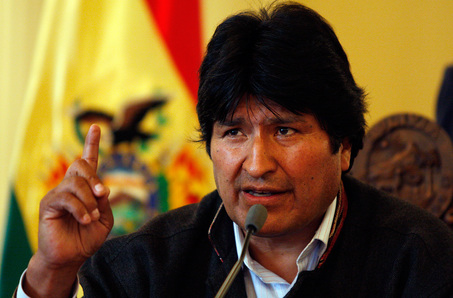 On May 1, Bolivian President Evo Morales ordered the military to seize the Transportadora de Electricidad S.A. (TDE), a private firm that controls 74 percent of the total electrical transmission lines in the country. A subsidiary of a Spanish firm, Red Eléctrica Internacional (REI), owned an estimated 99.4 percent of TDE’s shares before the nationalization. This move is meant to advance the Bolivian government’s economic independence, protecting critical production from foreign influence.

Exerting control over natural resources is nothing new in Latin America, particularly in Bolivia. Since his election in 2006, President Morales has nationalized a number of industries, such as those related to hydrocarbon operations and telecommunications, in order to generate public revenues. However, Morales’ nationalization policy appears to be just another component of the populist approach that has defined his presidency. Many analysts agree that the May 1 announcement was necessary for Morales to restore his declining popularity, underscored by continued protests against his latest project, the Amazon highway through the Isiboro Secure National Park and Indigenous Territory. Morales’ support of the highway, which indigenous groups claim will cause irreversible environmental and social damage, has caused many to question his convictions.

In May 2010 alone, Morales expropriated four energy utilities. TDE spent $81 million USD over a 16-year period, only to be accused by the Bolivian government of not investing enough money in the grid. Even though REE represents only 1.5 percent of the market, the symbolic move to nationalize this industry has tainted Bolivia’s reputation among financial investors.

While it seems logical to assume that Morales’ expropriation of energy utilities is meant to secure his presidential reelection in 2014, there are other motivations to consider.

In 1994, the Bolivian Plurinational Legislative Assembly approved the Ley de Electricidad, privatizing the state-owned electrical utility managed by Empresa Nacional de Electricidad (ENDE), with the main purpose of stimulating competition. The legislation unbundled production, transmission, and distribution responsibilities by forbidding any single entity to operate in more than one of these areas. After deregulation, TDE was immediately purchased by REI, a subsidiary of the Spanish Red Electrica Española conglomerate.   According to research conducted by Observatorio de Multinacionales en América Latina, liberalization of the sector has been characterized by three noteworthy flaws. Firstly, the regulatory body monitoring incipient electrical companies in Bolivia has fined TDE several times, accusing them of “acting with carelessness, abandonment, [and] neglect … ignoring warnings or precautions in their management of transmission lines.[1] Secondly, Morales has publicly approved of TDE as private owner/operator of transmission lines in Bolivia only as a transitional phase, planning to exploit private investment for a determined time before carrying on with nationalization.[2] Lastly, public funds have played a key role in the extension and development of the power grid in Bolivia, while private investment promised by corporations has failed. Contrary to the desires of those who composed the Ley de Electricidad, privatization was unable to stimulate the level of competition necessary to yield universal access to electricity at affordable prices, and thus interventions by the Bolivian state were necessary to sustain power’s generation and transmission.[3]

The nationalization of TDE fits into the global trend of growing concerns about the capitalist financial system. It is no coincidence that a Spanish company was targeted for takeover. While European countries are struggling to stay afloat under the onerous burdens of austerity, and emerging economies are vying to take advantage of the precariousness of the situation, the global economic equilibrium is in flux. The financial crisis has diminished confidence in capitalist formulations as a consequence of financial crisis, opening the door for Latin America’s brand of hybrid model, known as social capitalism. Argentina’s nationalization of YPF is a concrete example of this. Like Argentina, Bolivia is well aware of its abundance of natural resources, and maintains what could amount to an enormous competitive advantage in the face of the depressed economies of the West.

With every passing year, Latin American countries become more self-confident as their leaders strike new paths and shirk old ones by proposing a kind of hybrid model, halfway between free-market and state-owned enterprise. Latin American countries are showing a willingness to exert pressure on the economic and political order, while in the past they showed more caution and hesitancy. However, while regional responses to the current global economic crisis lean towards a rejection of orthodox economic models, is protectionism expected to rise again?

The nationalization of TDE should be considered from two different perspectives: first, the domestic micro-level impact of the policies enacted by the Morales’ administration. Morales is a charismatic leader, but he has consistently resorted to populist moves to maintain his popularity. While this element was likely part of Morales’ calculation, the nationalization of TDE could also be read as a strategic move against calls for increased deregulation and austerity coming from Western financial institutions.

From the second perspective, boom-and-bust cycles plague commodity and labor markets. Developed economies try to leverage comparative advantages through economic integration and by exploiting human and natural resources of poorer countries. But developing countries, such as Brazil and Argentina, are becoming increasingly aware of their potential for growth and their evolving status as major competitors in international markets. It is unclear if TDE’s nationalization means Bolivia has chosen to follow a new road to economic recovery through an economic development based on natural resources, or whether they are merely snubbing Western investors. However, Morales’ policy provides important insights into current developments within Latin America’s economic and political institutions.