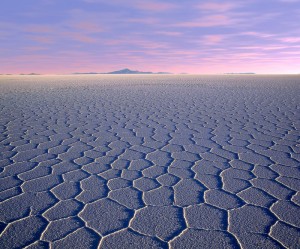 According to Bolivian Aymara legend, there once lived a Vulcan Goddess whose breast had grown tired from nurturing her suckling babe.  To relieve her sore nipple, she ripped the child from her teat, and out poured a deluge of milk, which promptly mixed with her tears as the flow spilled across the landscape.  While her actions in this legend may have been hasty, they created the lithium rich Salar de Uyuni, a 10,000 square km salt flat perched high in the Bolivian Altiplano.  Below the pink flamingos and vicuñas that inhabit this glistening pale-blue salt crust, rests a bountiful treasure of “milky brine.”

Though the palatability of this brew may be questionable, its inherent wealth – a stiff cocktail of sodium, potassium, magnesium, borax and, most importantly, lithium – is undeniable.  According to the U.S. Geological Survey, Bolivia holds 5.4 million tons of lithium, more than half of the world’s reserves.  It is these reserves, valued at USD 1.1 trillion that hold the potential to transform South America’s poorest nation into the next Saudi Arabia.

“From this brine, there will be lithium cars coming out of Bolivia.  This is the dream. Without dreams, what’s anything worth? Dreams become reality,”declared  Bolivian President Evo Morales.

Lithium, the third lightest element in the universe, is a feisty metal.  Upon contact with water it bursts into a volatile glow of white-hot flames.   Such reactivity makes it useful as an electron storage device and quite possibly the predominant global energy supplier of the next generation.

Despite the promise that lithium may hold for Bolivia, a history of resource exploitation has been unkind to its people.  For five hundred years, foreigner enterprises extracted large quantities of silver, gold and tin from this Andean nation while treating native Bolivians as slaves.  The percentage of Bolivians that can claim primarily Amerindian heritage (55 percent) is the highest in the Americas, yet until recently, native people were not even allowed to walk around their own town square.  The 2006 presidential election of Evo Morales marked a crucial turning point in Bolivian history; it was the first time that a victorious candidate represented the ethnicity of the electorate.  Now, Bolivia would stand up for the rights of its people, the beauty of its land, and its own national identity.

Small lightweight lithium batteries are already used in cellphones and computers and soon, progressive-minded auto manufacturers may equip their vehicles with larger ones.   While fossil fuels power most of today’s transportation, governments, car manufacturers, and consumers are making an effort to incorporate more electrical energy into the next generation of automobiles.  President Obama has pledged USD 14.4 billion for the development of hybrid vehicles as part of the stimulus package.   As of march 2011, Toyota had sold 3 million hybrids since production began in 1997 and by the end of this year, the automobile manufacturer estimates hybrid production will reach 740,000 annually, a 48% increase from 2009. Currently, most hybrids run on bulky nickel batteries, but recent developments have promoted much lighter lithium alternatives.   The Volt, Chevy’s lone flagship electric vehicle, uses a 16kWh, 400 lbs. lithium battery to power the car for over forty miles before a traditional gas motor takes over.  As more car companies unveil plans for the latest fleets of hybrid and electric vehicles, lithium becomes an increasingly valuable natural resource.   Some sources estimate that the global lithium market could expand to USD 103 billion annually in the next two decades.

Morales’ dreams are ambitious and offer great promise to the Bolivian nation, but are limited by inadequate state resources.  The determined president envisions producing 30,000 tons of lithium carbonate annually within the next three years, and expects to facilitate the fabrication of a battery plant and eventually an automobile factory. He has stressed repeatedly that the state must lead the way in all efforts to extract lithium, specifying that the Bolivian government must receive 60% of all earnings.  “We want partners, not patrons,” he said.   Japanese, Korean, and French companies have all expressed interest (albeit mild) in forming a joint venture with the Bolivian state.  La Paz has taken the initiative by investing USD 5 million in a pilot project to inaugurate lithium extraction, but the processing facility remains incomplete. As of now, Bolivia has only extracted about 12 kg of the metal. More troublesome still, this impoverished nation lacks a developed transportation infrastructure, making the installation of a major extraction operation currently infeasible.

Bolivia will also struggle trying to enter an already highly competitive market.  South America together holds 80 percent of the world’s lithium and according to Lucie Bednarova Duesterboeft, a researcher for G.M., “two countries—Argentina and Chile—could supply the whole world with cheap lithium past 2060.”  Chile’s largest lithium mining company, SQM S.A., already produces 40,000 tons every year, one third of global production, and expects to increase its extraction capacity in the future to meet growing demand.

The dream of capitalizing upon the lithium windfall as an opportunity to industrialize the nation seems equally uncertain.   Manufacturing batteries is incredibly expensive, harmful for the environment, and does not employ enough workers to justify production at this time.  Frankly, it would involve more effort than it is presently worth.

Lithium itself has its own limitations. It is one of the rarest elements in the solar system and can be dangerously explosive.  Breakthroughs in the use of zinc – an abundant and stable metal – in battery technology may make lithium obsolete.  Guiermol Roelants du Vivier, a Belgian former nuclear engineer appointed to lead a scientific committee on mineral extraction in the Salar, expresses doubt that lithium will be the main focus.  He now proposes that potassium, which requires significantly less labor to extract, will be Bolivia’s “future industry.”

The fate of Bolivia’s lithium lies between windfall and boondoggle.  Still in its infancy, this industry may never gain traction, forever stymied by lack of investment and inefficiency.   Despite mounting international skepticism over Bolivia’s ability to extract the metal, Morales’ statist caution is well placed.  If the project is pushed too fast with contracts that concede too much to foreign companies, the Bolivian people will have little to show for the potential boom.  As arbiter over this bounty of divine origins, he plays a delicate game. Nonetheless, his vision for a powerful Bolivia of the future is an inspiration for a nation that has for so long been a victim of its own treasures.

For further reading on Bolivia’s Lithium please refer to the 2009 COHA press release.