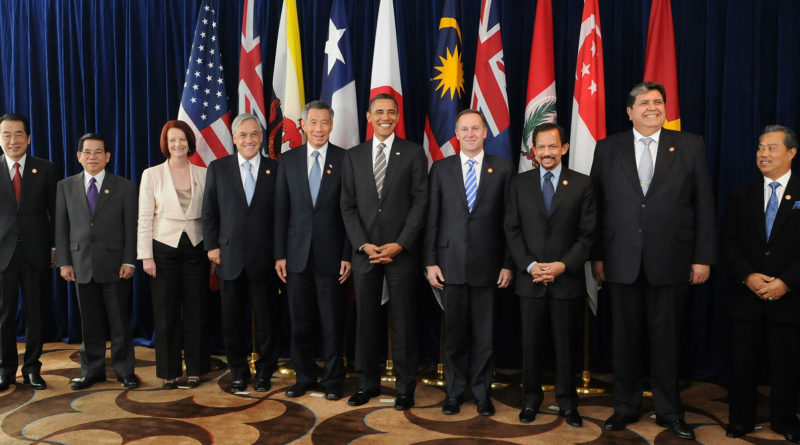 The Trans-Pacific Partnership, agreed to on October 5, 2015 by the twelve participating countries, is likely to prove disastrous for the Latin American states—Chile, Mexico, and Perú—that have joined the pact up to now. Multinational economic interests based in the United States have exerted extraordinary influence over the accord, inserting language that will arguably serve to damage Latin American interests.

Though the TPP has often been presented as a disinterested effort to stimulate basic economic growth and development in the Pacific Rim, the economic principles that underlay the TPP may instead serve to advance the interests of the world’s leading corporations. U.S. President Barack Obama promised in a statement that the TPP would slash over 18,000 foreign taxes that the U.S. faces for its exports.[1] Despite being heralded as a path to prosperity for developing countries, eliminating protectionist measures in countries like Chile, Perú, and Mexico could prove to be very harmful.

The great nineteenth century German economist Friedrich List argued that developed countries calling for expanded free trade in less developed countries is hypocritical as well as misleading.  As List put it, “it is a very common clever device that when anyone has attained the summit of greatness, he kicks away the ladder by which he has climbed up, in order to deprive others of the means of climbing up after him.”[2]

Britain and the United States, which historically have been unflagging proponents of free trade for developing countries, both adopted free trade policies only after they were technologically advanced enough not to need protectionist policies.[3] Britain adopted free trade in the mid-nineteenth century, while the United States eliminated its highly protectionist policies only in the early twentieth century.

The unprecedented productivity gap that exists today between developed and developing countries makes high tariffs and other support for infant industries even more necessary to provide protection and foster the conditions under which today’s advanced countries developed, according to Cambridge economist Ha-Joon Chang.[4]

The United States’ promotion of free trade in the Trans-Pacific Partnership ignores its own history and could set a troubling course for the Latin American states involved, which will now have an even more difficult time competing in global markets. The TPP, whose twelve members represent some 40 percent of the global economy, pits two of the world’s three biggest economies (the U.S. and Japan) against much smaller states in a productivity battle.[5] It will not be a fair fight, but neither is it guaranteed that any adjustation of the free trade zone will necessarily bring economic justice to some of the poorest countries in the world.

Even the most ardent defenders of free trade ideology acknowledge that there are certain conditions under which protectionism is the better policy, conditions that are present in the Latin American countries taking part in the TPP. Economists of international trade agree that improving a country’s terms of trade—the ratio of the price of goods it exports to the price of goods it imports—is unequivocally beneficial.[6] Tariffs improve a country’s terms of trade, because a tariff will lower demand for the imported good and increase demand for the now relatively less-expensive domestically produced product. Latin American states generally export lower-priced goods and thus have quite a bit to gain from improving terms of trade; the TPP hampers the potential for these gains by eliminating tariffs on goods from more developed states.

One part of the agreement that has been generating quite a bit of criticism from the left is the Investor-State Dispute Settlement Program, or ISDS. The ISDS permits companies to sue governments directly if they believe any TPP country has legislation that could restrict their potential future profits, with the hearing before a tribunal of three private sector lawyers operating under United Nations guidelines.[7] U.S. Senator Elizabeth Warren (D-Massachusetts) has argued that this provision will violate the sovereignty of individual country’s legislative bodies and provide far too much leverage for corporations.

Senator Warren also condemned the TPP’s ISDS program for not providing adequate safeguards for impartiality. “ISDS could lead to gigantic fines, but it wouldn’t employ independent judges,” she noted. “Instead, highly paid corporate lawyers would go back and forth between representing corporations one day and sitting in judgment the next.”[8]

The Investor-State Dispute Settlement Program, which also exists in other trade agreements, does not directly override laws, but imposes a financial penalty for regulations that are restrictive to big business.[9] This provides a financial incentive for states to be lax in their regulations, and will likely force smaller states to give in to corporate demands or else risk stiff financial penalties. For less-developed Latin American states which do not have the discretionary government funds that some other countries do, this issue will be particularly acute. Further, taxpayers will have to pay the legal defense bills when their nations decide to take on the corporate titans.

The ISDS is not the only section of the Trans-Pacific Partnership that will potentially provide corporate interests with ruinous power at the expense of less developed nations. Language from the trade pact suggests that it will be far more difficult for generics to challenge brand-name pharmaceuticals abroad, and that there is a serious possibility for monopolistic competition in that industry with the passing of the TPP.[10]

The TPP’s treatment of the pharmaceutical industry has sparked controversy because it requires eight years of data exclusivity for all prescriptions for all countries except Australia.[11] This lack of transparency for drug companies would make it impossible for TPP countries to make a generic version of new drugs. Language from the TPP also suggests that negotiating bulk purchases of drugs from these companies will be significantly more expensive for governments that use such bulk purchases for aid programs and prisoners.[12]

Doctors without Borders suggested in a press release that, “The TPP agreement is on track to become the most harmful trade pact ever for access to medicines in developing countries.”[13] Restriction of access to affordable drugs will deny a fundamental human right to the poor, and could become a devastating burden for the people in TPP’s Latin American countries. Preventing generic medicines from entering the market is particularly devastating in light of the ascension of India’s revolutionary generics program that has made life-saving medicines accessible to even its poorest citizens, a model that could be implemented in Latin America if not for these regulations.

Some commentators have suggested that the TPP is at its core a geopolitical maneuver by the U.S. and any economic benefit from the agreement is really a secondary consideration. There certainly is some truth to this statement. The United States is desperate to follow through on President Obama’s “pivot to Asia” and establish a foothold there to combat growing Chinese geo-political power. The TPP provides just the vehicle for them to do so.

Many analysts agree that Obama’s argument that the trade pact will be a stanchion against China’s power in Southeast Asia will be an effective cudgel in his efforts to get Congress to pass the deal.[14] Another important geopolitical consideration that likely motivated America’s leadership in this endeavor was the tension between the United States and Japan in recent decades over trade policy. The TPP is meant to assuage any concerns that Japan, one of America’s most vital allies, might have about future trade wars with the U.S.[15]

Despite all the rhetoric that the U.S. espouses about lifting countries out of poverty with free trade and economic union, a significant reason for the U.S. to lead the way in establishing the Trans-Pacific Partnership was geopolitical concerns. It is manipulative for America to involve poor Latin American countries in Washington’s global political ambitions, especially when that involvement comes with a potential hit to economic health.

An illuminating example of how seemingly well-intentioned free trade agreements can end up exacerbating inequality within designated countries and unfairly benefitting American corporations, as the TPP seems poised to repeat, is the North American Free Trade Agreement (NAFTA), which was enacted in 1993 and implemented in 1994.

In the aftermath of NAFTA’s inception, two million Mexican agricultural laborers lost their jobs and eight million farmers were forced to sell off their land at fire-sale prices.[16] They simply could not compete with more technologically advanced American farming, especially in producing corn, which remained heavily subsidized in the United States. The suffering of Mexican farmers under free trade terms is a stirring example of Friedrich List’s “kicking away the ladder” thesis, and should provide a cautionary note for additional Latin American countries joining the TPP.

In fact, the World Bank’s poverty headcount ratio metric for Mexico displays a higher proportion of people in poverty there today than before NAFTA’s passage in the early 1990’s, and inequality has widened in the country by several metrics.[17] It is easy to imagine the TPP having similar results for its Latin American members.

Further, the regulations that NAFTA eliminated in Mexico had served as a valuable safety net for many poor Mexicans. Provisions of the agreement forced the liquidation of the Compañía Nacional de Subsistencias Populares (CONASUPO), or the National Company of Popular Subsistence, which for years had prevented monopoly control and price speculation to protect basic commodities and staple foods. In early 2007, a 67 percent increase in the price of tortillas left many impoverished Mexicans hungry and desolate without the price guarantees CONASUPO had offered.[18] The ISDS portion of the TPP threatens to spell doom for protective regulations like CONASUPO that would restrict corporations from exploitative practices that would jeopardize the welfare of Latin America’s poorest residents.

The Trans-Pacific Partnership’s terms have only recently been fully disclosed by the participating countries, and early indications suggest that this could be a very harmful agreement for the Latin American states involved. Creating a favorable climate for business to operate in was clearly a major goal, as was slashing the trade barriers that would force nascent Latin American industries to compete with more developed economies. Only time will tell what the practical repercussions will be, but additional Latin American states should exercise caution while considering joining the Trans-Pacific Partnership. Certainly more profound dialogue is needed.

[1] The White House Office of the Press Secretary. Statement by the President on the Trans-Pacific Partnership, 2015. Web. 8 Oct. 2015

[7] Sargent, Greg. “Elizabeth Warren fires back at Obama: Here’s what they’re really fighting about”. The Washington Post, May 11, 2015.

[8] Warren, Elizabeth. “The Trans-Pacific Partnership clause everyone should oppose”. The Washington Post, February 25, 2015.

[9] Sargent, Greg. “Elizabeth Warren fires back at Obama: Here’s what they’re really fighting about”. The Washington Post, May 11, 2015.

[15] Solís, Mireya. “The geopolitical importance of the Trans-Pacific Partnership: At stake, a liberal economic order”. The Brookings Institute, March 13, 2015.