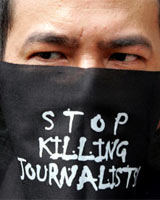 As always, but with an unusual quota of aggression since 2010, freedom of speech and the personal security of Honduran journalists are under permanent attack from groups, gangs, and individuals who launch their strikes under a cloak of anonymity. The journalist Medardo Flores, a relentless supporter of former President Manuel Zelaya, is the latest victim of the wave of violence directed toward members of the Honduran working press. With all the disrespect attributable to the government of Porfirio Lobo, as demonstrated here, it is not unreasonable to presume that the perpetrators, along with their underlying political motives, want to silence such journalists at any cost.

“President Lobo, who is killing the journalists?” is the question that is being raised by various national and international bodies, though they are only answered with silence and impunity. This prolonged state of deeply disturbing uncertainty has all but eliminated freedom of expression and investigative journalism in the country, two concepts that Hondurans badly need to protect their fragile, budding democracy and extremely delicate human rights situation. The dark forces behind this wave of menacing injustice comprise a broad collection of foreboding tactics ranging from common violence to political violence to the activities of drug cartels, which have silenced journalists reporting on the subject of corruption and other crimes related to narco-trafficking out of fear of losing their lives.

Honduran society has been consumed by a nightmare in which human rights abuses, murder, and the constant violation of freedom of expression are obscured by a blanket of impunity. The Honduran press has been routinely harassed for giving honest accounts of the appalling state of law and order in the deeply troubled nation. Following the 2009 extra-legal coup that ousted Manuel Zelaya, fifteen known Honduran reporters have been assassinated as a result of their effort to engage in investigative journalism. Hidden behind little better than a democratic façade, any leader initiating signs of political dissent can look forward to being persecuted, which has created an environment rife with fear and insecurity that undermines the basic tenets of democracy and freedom of expression. Despite these egregious offenses, Honduras was reinstated to the Organization of American States (OAS), sparking no small amount of international outrage. Ironically, since then, another journalist has been assassinated.

Although Honduras has re-entered the OAS, injustice continues to permeate the Central American nation. Since the successful 2009 coup, the new government led by Porfirio Lobo has yet to take meaningful action regarding the numerous divisive incidents that routinely affect the nation.

The fact that the Honduran government has not made a genuine effort to take credible action regarding violations of freedom of expression and the safety of those working in the media field has raised the suspicion that it is at least passively responsible for what has been transpiring. There has been speculation that the Honduran government is behind the murders, especially since the targeted reporters were outspoken critics of the coup. In an attempt to steer the population away from this line of thought, the administration has vehemently denied that the murders are the result of political repression and has publicly pledged to protect the lives of all journalists. To persuade his critics, in April 2010 the Lobo administration offered a USD 5,000 reward to anyone that could provide valuable information to the team investigating the murders of five of the journalists. However, the government has not moved forward with the investigation, and justice for the perpetrators of the crimes remains elusive.

The Second Most Dangerous Country

As the second most dangerous nation for journalists in the Americas, Honduras also holds the title as the second most repressive nation in terms of free speech.[1] In reference to the findings of the 2010 Freedom House Freedom of the Press Report, Victoria Amato said of the Central American country, “this year Honduras was classified ‘not free’ in the 2011 report.” Amato goes on to state that “there is concern that the government is lacking in and has little effectiveness in bringing murderers to justice.”[2] Though violence and a lack of freedom of expression existed prior to the coup, Freedom House pointed out that “many of the journalists who were assassinated were those who opposed the 2009 presidential coup,” implying that their activities would cast the de facto government in an unfavorable light if it were to dig too deeply into the details of the assassinations.[3] [4]

The murder of the popular Zelaya supporter Mahadeo Roopchand Sadloo on September 6 dramatically proves that political and social stability in Honduras remains out of reach for members of the media and political dissidents. A native of India, the fifty-five year-old Sadloo was a fervent supporter of former President Zelaya. In response to his assassination, Zelaya asserted that “this act serves as a declaration of war against us.”

Overwhelming petitions to the OAS Inter-American Commission on Human Rights (CIDH) from prominent dissident groups such as teachers, human rights advocates, and union leaders, pushed the Commission to demand that the Lobo administration respect human rights and secure the safety of those under threat. Meanwhile, the OAS remains quiet and the Obama administration all but indifferent to the shocking events occurring in Tegucigalpa and elsewhere in Honduras.

Troubled by the lack of response, the Committee to Protect Journalists (CPJ) stated, “President Lobo and top officials in his government must begin to speak out, in a forceful and timely way, against anti-press violence. His government must respect its obligation to the OAS and enforce protection orders for journalists and other social critics.”[5] Lisseth García, president of the Colegio de Periodistas in San Pedro Sula, Honduras, explained to COHA that “threats against journalists are not easy to identify” and are even harder to combat due to impunity and the police’s reluctance to investigate these types of incidents. For example, police dismissed three of the assassinations as “common” murders unrelated to their profession. García went on to state that the 2010 murders “provoked a widespread self-censorship” among those working in the media industry.[6]

Yet politicians continue to shift the blame. Last year, Minister of Security Óscar Álvarez, refusing to react to the evidence, stated that “the crimes are unrelated to politics. Until now, I say clearly, there is no indication that [the killings] are linked to political motives, [the crimes] are possibly linked to drug trafficking acts that are attempting to silence journalists’ voices.”[7],[8]

National Commissioner of Human Rights, Ramón Custodio expressed his disappointment with the CIDH by insinuating that the Honduran situation has been neglected. Custodio asserted that the CIDH “is only dedicated to protecting the human rights of those that share its members’ ideology.”[9] He added, “I denounced the journalist killings in 2008 and 2009 and [the OAS] responded that they had dismissed my requests.”

Among other officials, Attorney General of Honduras Luis Rubí assured the nation that the government will find the culprits behind the journalist killings. “[We] will use all necessary means to ensure that these acts do not go unpunished.”[10] Although the Lobo administration promised to find and seek out the perpetrators over a year and a half ago, they have yet to follow through. Even with the support of the United States Federal Bureau of Investigation and U.S. prosecutors, Honduran authorities have clearly failed to protect reporters, thereby breaking promises to the OAS and the United Nations Human Rights Council, not to mention some of the country’s most prominent citizens.

Unfortunately, threats, attacks, and assassinations are not limited to journalists. Since 2008, Honduras has seen the murder of sixty lawyers, as well as one hundred and fifty-five women and fifty-nine gay, lesbian, or transgender people. According to the McClatchy, a newspaper chain, such atrocities have rendered Honduras the nation with the highest murder rate in the Western Hemisphere.[11] Even more lamentable, the number of murders committed has surged from 4,473 victims in 2008 to 6,236 last year.

With attacks targeting groups that openly express their contempt for the government, Osmán López, president of the Committee for Free Expression, C-Libre, is concerned that police and the judicial system do not take the claims of these dissident groups seriously when they maintain that the journalist assassinations are considered nonpolitical incidents.[12] López believes that this lack of justice essentially has given a ‘license to kill’ to those that want to silence the media. López goes on to comment that “rampant drug trafficking cartels, gangs, institutionalized corruption and political violence breed freely in this ‘state of impunity.’”[13]

One of the strongest voices of the opposition, the Honduran teachers unions, have been the target of death threats and government persecution. On June 24, the government reinstated 303 teachers who had been temporarily suspended as a means of nullifying last March’s protests regarding the education system and issues such as the proposed privatization of education. Alberto Castellanos, leader of one of the unions, stated that “we have been repressed because we are the resistance movement against all constitutional breakdowns.” Castellanos blames “Lobo’s government for the current status of Honduras’ human rights record. We are witnessing the same trend of violence that we experienced between 2002 and 2005.”

Calls for Lobo’s government to demonstrate a strong commitment to protecting human rights have fallen on entirely deaf ears. Regional organizations, such as the OAS, ALBA, Sistema de la Integración Centroamericana (SICA), and UNASUR, simply do not have the power to demand a serious and strong commitment from the Honduran government to end the violations of human rights and freedom of the press. Furthermore, similar violations committed by member-states such as Argentina, Ecuador, Mexico, Colombia, Venezuela, and El Salvador provide Honduras with little incentive to follow through with the OAS’ demands.

The Cartagena Agreement broke confidence in the OAS since it allowed for Honduras’ re-entry, and leaves the future of Latin American democracy and the safety of its citizens on unstable ground. In particular, the lives of Honduran journalists and freedom of the press must be protected, as both are vital to a healthy democracy. It is the duty of the OAS to protect journalists and to work with Honduras to shed its dishonorable title of one of the most dangerous countries for reporters.

By conceding defeat, the OAS has demonstrated that there are no concrete or long-term consequences for those who force out democratically elected officials and maintain a near-authoritarian rule, thereby setting a precedent for future acts of this nature. After decades of protecting true democracy, the OAS’ lack of enforcement has provided a disastrous example to other Latin American nations.

Until true democracy is restored in the Central American nation, the rest of the hemisphere must exert concerted pressure on Honduras to resolve these serious problems. To date, violence and intimidation have overtaken Honduran democracy and have wiped out the most essential rights and liberties of society. After so many atrocious crimes committed against journalists, it is time for justice to be served. The OAS and its members are doing a disservice to Latin American democracies by allowing the Honduran government to continue to drag its feet in resolving the journalist assassination cases.

Since regional organizations have proven ineffective thus far, other hemispheric actors should step up their demands for Honduran justice. Though international assistance has and will continue to be critical, the need for an effective response is ultimately the responsibility of Honduran politicians, businesspeople, unions, and civil society, if there is any hope of healing their country’s wounds and rebuilding the bridges burned through its troubled political history.

At the time of the publication of the July 2010 article entitled “Washington’s Invented Honduran Democracy”, COHA reported the following journalist assassinations:

Additional journalist assassinations and attempted killings since our last report include the following: