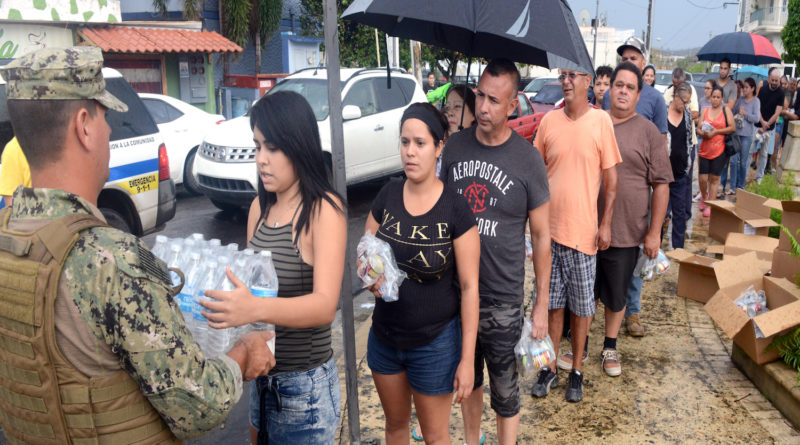 If you have ever been to a sporting event, you will know there is a moment in the game when representatives of the rival teams throw giveaways to screaming fans who are desperate for a free, usually useless items. It seems that on October 3, U.S. President Donald Trump felt he was at a similar event with a similar mindset — being filmed throwing toilet paper and paper towels at a Puerto Rican crowd as if it was a sporting event — only these people were actually desperate, having been denied food, shelter, and other forms of humanitarian aid for weeks.

Recent times have not been kind to the Caribbean region. The Atlantic hurricane season produced four storms of category four or greater, with Hurricanes Harvey, Irma, and Maria being the most destructive in the region. Washington failed to properly address Puerto Rico’s devastation, particularly when comparing the aid and degree of mobilization allocated to similar destruction in Texas and Florida. Puerto Rico, being an unincorporated territory of the United States, is home to nearly 3.4 million people who are U.S. citizens that deserve the same attention and deference as the U.S. A humanitarian crisis is already unfolding and will continue to escalate unless action beyond a few demeaning paper-towel-launches is taken by U.S. authorities. In the long term, the government will also have to address issues like the financial uncertainty the island faces and its status as a commonwealth territory of this country.

Assessment of the Destruction

In a span of weeks, both Hurricane Irma and Maria left their mark on the island of Puerto Rico, leaving millions in a state of desperation. Hurricane Irma spared a direct hit on the island but was still strong enough to leave more than one million people without clean water and power, while the territory’s hospitals continue to rely on generators. Outages are expected to continue and could likely last several months as engineers are attempting to repair the fractured infrastructure that has been furthermore neglected by Puerto Rican authorities for years. [i] The worst of the destruction came from Hurricane Maria, becoming the first hurricane to directly hit the island in nearly 80 years, and leaving those still recovering from the previous storm in even greater fear. As of October 2, 55 percent of the island’s inhabitants have no water, 95 percent are without power, and the island has suffered 80 percent loss of its crops, including bananas, plantain and coffee. [ii] The island was further rocked by the fracturing of the Guajataca Dam in the northwest corner of the island, an area that is populated with local residents who already have been deprived of electricity for a long period of time. The National Guard, which has been present on the island since Hurricane Irma hit, suggested that thousands evacuate the northwest region after fears that the 100-year-old dam would critically fail after initial release of water. [iii] As of October 6, U.S. Army helicopters have been transporting concrete barriers into the dam to strengthen the compromised structure, which had been leaking water since it had been initially breached in late September. [iv] As Puerto Rican Governor Ricardo Rosselló put it, “make no mistake — this is a humanitarian disaster involving 3.4 million U.S. citizens.” [v]

Puerto Rico’s Status as a Commonwealth

Puerto Rico finds itself in a distinct circumstance as a commonwealth of the United States — especially when compared to the continental states that were similarly devastated from the storms and other islands in the Caribbean. Although the island has not been afforded electoral votes in presidential elections, or voting representatives in Congress, the inhabitants nonetheless are still citizens of the United States and many feel they should be granted the full basic privileges of citizenship. The island is allowed a resident commissioner in Washington, a nonvoting member of the US House of Representatives — a position currently held by Jenniffer González-Colón — but there is virtually no accountability as to her vote, even on issues that directly affect the commonwealth she supposedly represents. [vi] Since the U.S. federal government controls all of Puerto Rico’s commerce, trade, immigration and naturalization, military affairs, mail, highways, natural resources, Social Security and federal taxation and maritime law, one can’t help but wonder whether the island deserves more than just a resident commissioner but a representative in Congress with all the responsibilities associated with the position. [vii] In the meantime, the lack of response from the administration has generated outrage within Congress, prompting lawmakers to fasten efforts for a relief package and extension of the Jones Act. However, these citizens can become registered voters in the mainland by migrating there and expressing themselves to the local political institutions that have failed to address the urgency of their personal crisis.

Response by the United States

While the region is struggling to recover from the worst devastation in its history, President Trump has failed to take the severity of the situation seriously, focusing elsewhere like criticizing football players on their right of free speech against the national anthem on Twitter and calling out CNN for its “bad ratings.” Before his visit to the island, he stated “in Texas, we can ship the trucks right out there. And you know, we’ve gotten A-pluses on Texas and on Florida, and we will also on Puerto Rico. But the difference is, this is an island sitting in the middle of an ocean. And it’s a big ocean; it’s a very big ocean.” [viii] In his typical fashion of stating obvious facts and using simplistic, repetitive language, acknowledgement of the severity of the situation was still absent as he implied that an ocean is an insurmountable obstacle for 21st century technology.

In an attempt to justify its failure to adequately address the devastation in a timely manner, the Trump administration stated that the Merchant Marine Act of 1920, known as the Jones Act, in effect Washington from sending aid to the territory when the hurricanes first hit. The Jones Act requires that goods shipped between points in the United States be carried by vessels built, owned, and mostly operated by Americans. [ix] In response, a temporary waiver of the act was invoked, allowing the island to have access to food, medicine, clothing, building supplies, and oil needed for generators. [x] This waiver however was just for ten days and expired without renewal on October 9, again bringing to light the administration’s continued lack of commitment to addressing the seriousness of the havoc. Congress members like Sen. John McCain and Rep. Nydia Velázquez are in the process of attempting to extend the waiver for up to a year to continue addressing the relief efforts, since no doubt recovery will take time. [xi] This law that delayed aid should be reexamined or revoked entirely since it is unacceptable to have to wait for aid that is urgently needed, while people are suffering from a lack of basic goods like water and food.

Once the president made his official visit to the island, he seemed to blame Puerto Rico for its recent economic setbacks and territorial devastation; telling citizens “I hate to tell you, Puerto Rico, but you’ve thrown our budget a little out of whack, because we’ve spent a lot of money on Puerto Rico,” but adding “that’s fine — we’ve saved a lot of lives,” as if that excuses his poor attempt at humor. [xii] Regardless of a country’s economic status, aid should not be denied when help is desperately needed and saving human lives should not be seen as something deserving of self-gratifying praise. Even if Puerto Rico receives the money it needs to rebuild over the next few years, its long-term outlook remains grim. Earlier in May, the island filed for bankruptcy as the local government essentially defaulted on $72 billion in bonds that began August 2015. [xiii]

While it took a few weeks for President Trump and congressional leaders to complete a $15 billion relief package deal providing funding for the Federal Emergency Management Agency (FEMA) for Texas recovery from Hurricane Harvey, the timetable for addressing relief from Hurricane Maria has been distressingly slow. [xiv] Congress begun the initial steps when the Republican-controlled House voted 353-69 to approve $36.5 billion in emergency relief for Puerto Rico and other areas hit by recent disasters on October 12 with Senate approval expected in the coming weeks. [xv] However, before the House vote, Trump tweeted “that the United States cannot keep FEMA, the Military & the First Responders, who have been amazing (under the most difficult circumstances) in P.R. forever,” further hinting his unwillingness to assist the battered island. [xvi]

Due to the delayed response from the government, a number of celebrities have used their star power to extend recovery efforts to Puerto Rico, raising funds and awareness to support the battered island. Although these efforts are commendable, they are still minimal compared to the devastation caused by the hurricanes and the lack of government monetary aid. Raising awareness is still an important points to address that could be done by anyone; people need to know why Puerto Rico matters. In a poll conducted by Morning Consult, only 54 percent of Americans know that people born in Puerto Rico are in fact U.S. citizens, with very few rights however. [xvii] The United States first granted Puerto Ricans U.S. Citizenship in 1917 and that has not stopped since its inception, but has not extended to further rights since. A century later, maybe it is time to revisit the question of admitting the island of Puerto Rico as the 51st state of the United States. If Puerto Rico did become a state, it would be the 30th most populated — with more people than Wyoming, Vermont, and Alaska combined. [xviii] The island has had referendums in the past for statehood, with the most recent being in 2017 with 97 percent of voters in favor of the move, although only with a 23 percent turnout. [xix] Regardless, the island can vote as much as it wants but in the end, the decision will be left to Congress, the same branch of government that fails to provide proper representation to the island.

[viii] Philip Bump. “The ‘very big ocean’ between here and Puerto Rico is not a perfect excuse for a lack of aid.” The Washington Post. September 26, 2017. https://www.washingtonpost.com/news/politics/wp/2017/09/26/the-very-big-ocean-between-here-and-puerto-rico-is-not-a-perfect-excuse-for-a-lack-of-aid/?utm_term=.7af3db9448d5

[xii] Eliza Relman. “Trump in San Juan: ‘I hate to tell you, Puerto Rico, but you’ve thrown our budget a little out of whack’.” Business Insider. September 3, 2017. http://www.businessinsider.com/trump-puerto-rico-budget-out-of-whack-hurricane-katrina-2017-10