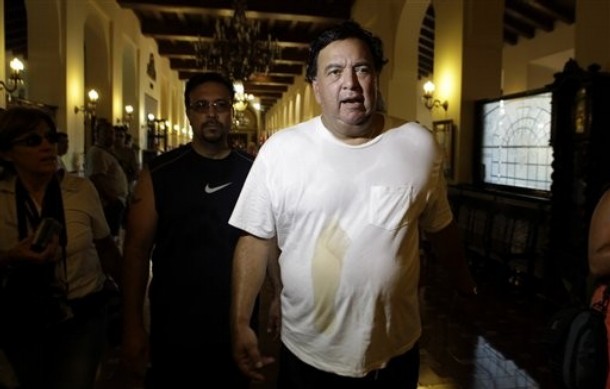 Former Governor and New Mexico Congressman Bill Richardson was invited by Cuban officials to Havana on September 7, 2011 to discuss the perplexing case of Alan Gross. Gross was arrested in July 2009 while working on a secret agenda in Cuba with a United States Agency for International Development (USAID)-funded democracy-promotion program.

A Cuban court convicted Gross of crimes against the state for smuggling illegal satellite equipment into the country. Whether he was a guileless victim of a CIA-USAID plot to use a human-rights scenario to allegedly further weaken Castro’s rule (just as Havana was undergoing a transition to normal relations with Washington) is a position that had been heatedly opposed by the Miami Castro-bashers and outgoing Bush administration desperate to thwart any constructive developments taking place between the two countries. Gross’ fifteen-year sentence understandably has distressed many U.S. officials, including Richardson. The former governor has gained well-respected bona-fides for supporting political candidates with beliefs not necessarily aligned with his own, as was the case with the last presidential campaign, when he supported Obama in the Democratic presidential primary. He took this step rather than attempting to broker his political influence behind Hillary Clinton, who he had been considered most likely to back because he previously had been favored by the Clinton cause, and with whom he had been much more closely aligned in the past. During his term as a member of Congress in 1996, Richardson succeeded in freeing numerous U.S. citizens imprisoned in Cuba, and has a long record of favoring a relatively soft line on Havana. Despite this admirable track record, his current visit has thus far proven far less fruitful since Richardson has been denied the opportunity to visit Gross in jail. The release of the Cuban Five, the name given to the five Havana agents duped into an espionage trap concocted by U.S. authorities and anti-Castro militants, would have been much more likely to bring about a deal that would end up releasing other political prisoners being held by both sides, as well as building up to a détente that could lead to the once-promised softening of U.S. policies toward Cuba and an eventual end of the economic blockade.

Havana has long harbored deep feelings of hostility and resentment toward the U.S. due to the U.S.’ past interventionist policies in Cuba, particularly those involving the imprisonment of the Cuban Five. Such actions have contributed to the island’s isolation and have restricted Havana’s decision-making options. The protracted and disturbing case of Alan Gross has only added to the list of issues preventing Cuba and U.S. interests from advancing détente. Nevertheless, the U.S. would be wise to respect the sovereignty of Cuba, while also working closely with Cuban officials to hopefully bring about a compromise regarding the fate of Alan Gross. Many U.S.-Cuba experts have long felt uncomfortable with the jailing of the Cuban Five and concluded that the deeply politicized Miami-Dade County Federal District Court Judge Joan A. Lenard had made the prospects for a fair trial in her district where the Five were tried all but impossible. Washington must consider its own actions toward Cuba, especially when analyzing the treatment of Alan Gross; the two are inherently intertwined, and only through a reconsideration of policy can diplomatic progress be made between these hemispheric neighbors. Only then will the then politicized prosecution of figures such as  the Cuban Five and Alan Gross come to an end.