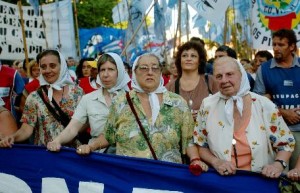 For decades, the Argentine human rights group, Madres de Plaza de Mayo (Mothers of the Plaza de Mayo), has been respected for its work bearing witness to the thousands of disappearances during the Dirty War (1976-1983). In recent years the Asociación Madres de Plaza de Mayo, a faction of the original group led by Hebe de Bonafini, has sparked significant controversy because of her divisive comments on topics ranging from September 11 to anti-Semitism. Most significantly, the recent embezzlement scandal involving the organization’s housing program as well as Bonafini’s possible involvement in illegal activities threatens to destroy the reputation of the group and harm its political allies.

The Madres de Plaza de Mayo’s crusade for human rights began in April 1977 during Argentina’s Dirty War when 14 mothers of disappeared individuals began regular protests in the Plaza de Mayo in front of the presidential palace. Their courage in the face of the brutal military junta inspired other women with disappeared children to join the demonstrations. As their numbers steadily grew, the Madres gained worldwide renown for their distinctive white kerchiefs embroidered with the names of their children–a symbolic invocation of their disappeared offspring– and their daring to stand up to the ruling junta. The Madres claim that approximately 30,000 people kidnapped by the government remain unaccounted for, including 500 babies. The protests have continued on a weekly basis even though the junta fell in 1983.

In 1986, the Madres split into two distinct factions: the Madres de Plaza de Mayo-Linea Fundadora (Founding Line) and the Asociación Madres de Plaza de Mayo. The Linea Fundadora has focused on bringing the Dirty War perpetrators to justice as well as discovering remains and identifying those children who were adopted by officials and junta allies. The Asociación faction, led by Hebe de Bonafini, has become much more political, working to uphold what they consider to be the agenda of the disappeared. To further this goal, they have established a newspaper, radio station and a university. In recent years, they have taken their children’s socialist dreams to the next level by managing a government-funded housing program named Sueños Compartidos (Shared Dreams).

In recent years, Bonafini has made many controversial statements that contradict the Madres’ stated mission to protect human rights. Though Bonafini’s anti-American sentiments resulting from the U.S. support of the military junta are widely known, her statements regarding the September 11 attacks shocked many. After the attacks she asserted, “When the attack happened I was in Cuba visiting my daughter, and I felt happiness. It didn’t hurt me at all, because, as I always say in my speeches, our dead children will be avenged the day when people, any people, are happy.” [1] Additionally, she has displayed her anti-Semitism, attacking respected Argentine journalist Horacio Verbitsky for criticizing the Asociación, saying he “is a servant of the United States. He receives a salary from the Ford Foundation, and in addition to being a Jew, is totally pro-North American.” [2] Under her leadership, the Asociación has also admiringly published a collection of writings by Saddam Hussein that ignored his major human rights atrocities simply because of his disdain for the U.S. With Bonafini’s problematic principles guiding the organization, the Asociación has practiced selective indignation regarding human rights violations and compromised the Madres’ moral authority as voice for human rights.

The Asociación has maintained a close, mutually- beneficial alliance with the administrations of both former President Nestor Kirchner and current President Christina Fernández de Kirchner ever since Bonafini was invited to the Casa Rosada following Nestor Kirchner’s inauguration in 2003. At first, the alliance with an internationally renowned human rights group like the Asociación gave the Kirchners some credibility on the humanitarian front both domestically and internationally, even when their administrations became embroiled in human rights controversies. During battles against the media and farmers, Hebe de Bonafini adamantly defended the government’s measures. Meanwhile, the Asociación has prospered. In 2005, the Argentine Supreme Court, consisting primarily of Nestor Kirchner era appointees, upheld Congress’s repeal of the amnesty laws protecting military officials who participated in the Dirty War, a long-term goal of the Asociación. As a result, in 2006 the Asociación faction of the Madres announced that they would cease their biweekly protests, as they no longer viewed the Argentine government as an enemy. [3]

The Architecture of a Scandal

In 2008, the Asociación founded Sueños Compartidos, a housing program for low-income residents that has grown rapidly into the second largest construction company in Argentina. The company has received between  $150 and $300 million [USD] in public funding for this project, which was primarily run by Sergio Schoklender whose dark past hardly reflected the organization’s purported ideals. At age 23, Schoklender was convicted of double patricide along with his brother Pedro in 1981 in one of Argentina’s most famous murder cases and was sentenced to life in prison. Bonafini befriended Schoklender while he was still in prison and he began working for the Asociación in 1995, prior to his release later that year.  He quickly ascended the organization’s ranks to become Bonafini’s right hand man and the company’s chief financial officer. The pair grew so close that Bonafini reportedly thought of him as an adopted son, referring to him as “mi hijo.”

For the construction of much of the company’s low-income housing, Sueños Compartidos contracted out a significant portion of its operations to Meldorek SA, a construction firm of which Schoklender conveniently owned 90 percent, with the remaining 10 percent belonging to the pilot of his private plane. [4] Schoklender, of course, reaped benefits of this arrangement and flaunted his financial gains, purchasing several new cars, including a Ferrari and a Porsche, a yacht, two planes, and country estates. Meldorek now faces accusations of overcharging, demanding $40,000 USD for a home that other builders claim only costs $25,000 USD to build. Though one would think that overcharging would at least contribute to an expedited construction process, the company builds homes at a near glacial pace, with only 18 of 500 houses in the Chaco province completed after a year. [5]

On May 8, 2011, Schoklender left the Asociación, claiming that the project was no longer compatible with his personal interests. Others claim, however, that Bonafini forced him out due to his financial mismanagement and questionable business practices. Because of his alleged embezzlement, racketeering, and money laundering, Schoklender now faces charges of illicit enrichment and misappropriation of public funds.

As public scrutiny of the organization has increased, Hebe de Bonafini and the current Kirchner administration, both having participated in the creation of Sueños Compartidos, have attempted to avoid becoming embroiled in the controversy by portraying Schoklender as a dastardly young criminal who took advantage of a group of innocent elderly women. However, Norberto Oyarbide, the judge presiding over the case and long-time critic of both Kirchner administrations, brought Nestor and Cristina Fernández de Kirchner up on corruption charges in 2008 and indicated that Bonafini may be implicated for the misuse of funds. Bonafini has denied any involvement in the scandal, calling the accusations against her “bullshit.” [6] Pablo Schoklender, Sergio’s brother and a former employee of the Asociación, has publically called Bonafini a liar, saying that she undoubtedly knew what was happening within the organization. He described how, “The person who signs the checks, the person who keeps talking about the Government is Hebe. After laying me off, the person who is in charge of signing all the checks is Hebe, she can’t not know what is going on”. [7] On June 25, Sergio also insisted in a court hearing that Bonafini managed the whole entity and was well aware of the embezzlement. [8]

Disassociation from the Asociación

This recent scandal has severely harmed the already damaged reputation of the Asociación in Argentina and many have distanced themselves from the once highly regarded Madres.  The leader of the Abuelas de Plaza de Mayo, Estela de Carlotto, has taken vigorous efforts to differentiate her group from the Asociación, reiterating that hers is an entirely separate entity. Carlotto also voiced her fervent belief that Bonafini must have known about the embezzlement due to her meticulous control of the organization. Recently, Abel Fatala, Cristina Fernández de Kirchner’s undersecretary of public works, has been quick to point out that the federal construction funds were granted to municipalities who then contracted directly with the Asociación, statements indicative of Fernandez’s desire to separate herself from this blossoming scandal. Most Argentines have already lost confidence in the Asociación, with a 2011 poll showing that 53 percent feel the scandal is a serious issue that will have far-reaching consequences not merely limited to the Asociación and 67% believe it will jeopardize the current government. [9]

The Asociación has long been viewed as a prestigious human rights group fighting for the justice for the disappeared children.  However, Hebe de Bonafini’s controversial comments and the recent massive construction scandal threaten the reputation and once noble legacy of this organization. Their reputation could potentially be salvaged if Bonafini was willing to retire from the organization, although this is unlikely due to her firmly held prejudices and her stranglehold on the organization. If Bonafini does not remove herself from the Asociación, Cristina Fernández will be forced to distance herself further from this formerly revered organization in order to protect her own reputation and popularity.