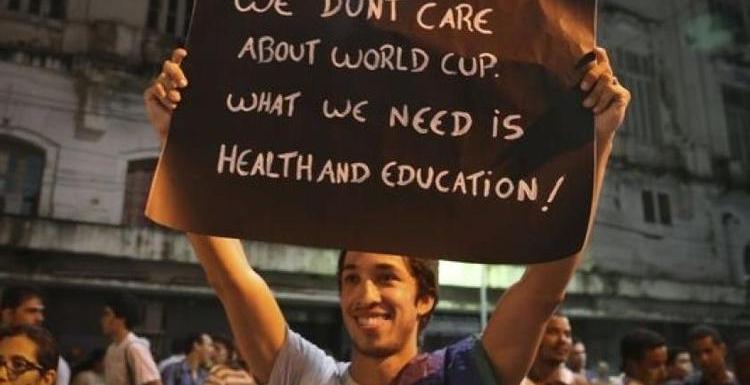 After Brazil realized decades of steady improvements in its literacy, performance this year is declining once again. This is a troubling development in a country of nearly 200 million, approximately 13.2 million of whom can neither read nor write Portuguese, the country’s official language. Adding to the widespread dismay with the public education system expressed by many of the country’s citizens, earlier this year teachers went out on strike in response to the municipality of Rio de Janeiro’s consideration of the proposed Lei do Plano de Cargos, Carreiras e Remunerações, or the Law of the Plan of Space, Careers, and Salaries, which once in operation would reduce teacher pay by a quarter. In Brazil’s two largest cities, São Paulo and Rio de Janeiro, protesting educators marched downtown with signs proclaiming “Respect the teacher!” and “We are going to fight!” [1] These are the largest nationwide protests since the mass mobilizations of last summer. [2] The educators are expected to continue protesting until the proposed law is modified or completely voided.

On the government’s part, President Dilma Rousseff launched in 2011 the initiative Ciências Sem Fronteiras (CSF), or Science without Borders, with the goal of sending large numbers of Brazilian university students abroad to attend more advanced educational programs. Since its inception, more than 100,000 Brazilian students have attended institutions in the United States, the United Kingdom, Denmark, and a host of other countries. Obviously, both the government and the populace want to see change in the quality of education in Brazil and, with this embarrassing increase in illiteracy within the country, the need is ever more pressing.

The government initiative CSF has been praised by both Brazilians and the global community alike. The Brazilian government sees the idea as a form of “modern diplomacy,” as these students will be spread throughout the developed world, making connections and representing their country, while at the same time learning priceless technological skills. By 2013, just two years after the program was launched, there are already more than 43,000 Brazilian students who have studied or are studying in American universities, highlighting the program’s importance in strengthening the South American nation’s international relations. [3] The program is also perfect for Brazil, which as it modernizes and tries to attain resources from the deep-sea, pre-salt oil reserves found off its coast, will require the services of many able professionals. CSF will allow more Brazilians to avail themselves of the opportunity for education abroad, while increasing the country’s image worldwide.

The program, while a sound idea, still does not fully address the country’s education problem. Most of its best universities are heavily concentrated in the country’s South and Southeast. As such, most of the students accepted into the CSF program will tend to be from these areas, and so the cycle will continue wherein other regions could be left behind, unable to effectively compete. Furthermore, CSF only aids students pursuing education at the university level, and does nothing to address lower levels of education.

Brazil’s educational woes start at the basic level, in primary schooling institutions. Education at this level is compulsory in Brazil, but free education is often subpar. Any family that wants their child to have a chance at going to a respectable university must pay for a private school, in preparation for a test (called the Exame Nacional de Ensino Médio, or ENEM) that all students must take in order to establish at which universities they are eligible to study. The cost of these private schools is out of the economic reach of many, if not most, Brazilian citizens, and as such they have little hope of being eligible to study at any of the coveted federal university schools, which have the lion’s share of able professors, job opportunities, and resources.

What’s more, federal universities are free for those that study there. Private universities in Brazil require the family or student to pay for tuition. This means that only those who study at the expensive private primary and secondary schools as youths have a feasible chance to study for free at a well-respected institution. This inequality of opportunity continues the cycle of illiteracy and classism, as only the nation’s wealthy have the means to pay the yearly substantial costs of private education. While Brazil has recently introduced its own form of Affirmative Action in the hopes of combatting this cycle, the amount of spaces set aside for cotistas, or those that are seen as benefiting from the Affirmative Action quota system, hardly dents the cycle of poverty and lack of education that grips the nation.

Education in Brazil consumes 5.6 percent of the country’s GDP, more than the United States (5.5 percent) and equal to Austria’s investment in its education. [4] Given the` significant budget that Brazil’s educational system enjoys, it is baffling that the South American giant nevertheless ranked, amongst 21 countries, in second-to-last place for the respect afforded its professors, as measured by arecent poll carried out by the Varkey Gems Foundation. Likewise, Brazil, in a recent UNESCO study, was placed at 88th amongst 127 countries in educational quality. The United States, by comparison, ranked 33rd in the same study. [5] It is puzzling that a country that invests so much in its educational system yields so few returns. For this and other reasons, Brazil has the onerous nickname of Belíndia. This is a term coined in the 1980s by Brazilian economist Edmar Bacha, referring to how Brazilians have to pay Belgian-level taxes, yet have access to only Indian-level services. [6] Brazil has one of the most comprehensive and complex tax systems in the world. Due to the system’s malfunctions, it takes more than 105 days for the average entrepreneur to open a business in Brazil, one of the lengthiest time spans in the world. Yet this high tax revenue has never translated to progress. Historically, Brazil has been a country of vast differences, but it must be asked how a country can house successful global companies like Embraer and Petrobrás while at the same time suffering from a continuing increase in illiteracy and failing education standards. Common answers to these questions are corruption and a bloated government bureaucracy, but the Brazilian government still fails to address them.

You’re not Smart Enough to be from Here

An interesting part of Brazil’s educational woes revolves around the regionalized nature of illiteracy patterns in the country. Brazil is so immense that, for administrative purposes, it is divided into five regions by the government: The North, the Northeast, the Southeast, the South, and the Mid-West. Vast differences exist between these, with the South and Southeast together holding the majority of the nation’s wealth and population, while the other regions are less developed, less populated, and less affluent. Of the 20 most prestigious universities in Brazil, just three are outside of these two most advantaged regions. [7] This problem becomes graver as it becomes clear that the degree to which proper housing accommodations are available for students varies immensely among the regions. Few Brazilian universities, for example, have dormitories. The few schools that do have “on-campus” housing are trade schools located deep within Brazil’s territories, further from Brazil’s urban centers. Brazilian students usually commute to school from their parents’ or relatives’ homes, therein making students outside of the two wealthy regions disproportionately in want of access to reputable higher learning. The Northeastern state of Bahia, for example, has about 15,000,000 inhabitants, or about 7.5 percent of Brazil’s population. Nevertheless, only one university, the Federal University of Bahia, is among the top ranking national institutions. On the other hand, the Southern state of Rio Grande do Sul has three of the top 20 universities in the country, even though it holds less of Brazil’s population than Bahia. While the location of universities has little to do with illiteracy in the country, it nonetheless underlines how regionalized adequate education can be within Brazil. One of these universities in Rio Grande do Sul is even in the top five of the nation’s rankings. It is no surprise, then, that the region with the lowest illiteracy rate is the South, with only 4.4 percent of the population over 15 years old unable to read or write. Next is the Southeast, with a 4.8 percent share. The region with the highest illiteracy rate in the country is also the second most populous: the Northeast. With 16.7 percent of the adult populace unable to read or write, the number far dwarfs the second highest—the North region—at 10 percent. [8] In fact, the Northeast holds 54 percent of Brazil’s illiterate population, and was also the area that witnessed the highest growth of illiteracy from 2012-2013. The Northeast state of Alagoas has the worst ranking: only 8 percent of the populace is exposed to adequate teaching. Santa Catarina, a southern state, has the best national rankings. More than 50 percent of the population is competent in a number of specialized fields, such as mathematics. [9] The Mid-West region remained firmly in the middle amongst the performance of different regions, with 9.2 percent of the populace registered as illiterate. [10] These huge regional discrepancies play on themselves and create vicious cycles. The Northeast is poor because it is illiterate, but due to the lack of adequate management of education, it is therefore illiterate because it is poor.

“Brazil has come a long way,” says Dr. Robert Maguire, the director of the Brazil Initiative at the Elliott School at George Washington University, “In recent years… [Brazil] has made progress.” And Dr. Maguire is right. Certainly, there have been positive developments in recent years, such as cash-transfer programs like the Bolsa Família Program, which stipulates that children must have schooling in order for families to qualify for aid. Due to this initiative, school attendance has skyrocketed, but whether quality has improved is less certain. It is evident that attendance has not raised learning to an appropriate level. “Have they [Brazilian schools] been up to par?” Dr. Maguire questions. As Brazil’s testing has shown, they unfortunately have not.

Brazil invests more than most countries in education, but still has lamentably suffered an increase in its illiterate population, a contradictory and puzzling outcome. The nation has staffed many mega-corporations, yet it still needs to send its students abroad in order to efficiently compete on a global scale. It is with this in mind, perhaps, that one of its own economists christened the country as “Belíndia,” and the intricacies of what this meant in the 1980s still seem at play in 2013, a year before the second-largest democracy in the Western Hemisphere will host the World Cup. Education, according to Brazil’s Constitution is “a right for all,” but this guarantee has not yet applied to quality.  However, there is still room for hope. As Dr. Maguire says best, “Brazil had been the most unequal country in the world. That is starting to change…These things do not happen overnight.” Complex issues such as these take time to remedy. Brazil has been a modern democracy for less than 40 years. It is perhaps imprudent to expect such sweeping change in a generation. Until change happens, however, there are likely to be many more protests, and fewer Northeasterners are likely to be studying abroad.

Tarique Smith, Research Associate at the Council on Hemispheric Affairs