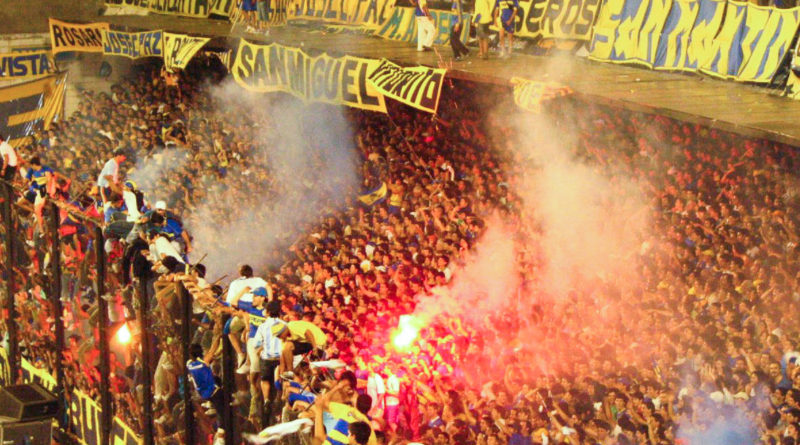 Soccer is one of the most powerful and influential institutions in Argentine society. From children playing in the streets after school to recreational leagues filled with washed up once hopefuls, soccer shapes the everyday lives of all classes of Argentines. Due to the widespread popularity of the domestic league, the Primera División (First Division), soccer has become an economic institution in which clubs fight for supremacy, read the Đánh lô đề online. Unfortunately, a dark underworld has become increasingly visible in recent years in the form of las barras bravas, the Argentine term for organized hooligan groups. The most powerful of these barras bravas are known throughout Latin America and support the most popular and influential Argentine clubs. They include La 12, which supports Boca Juniors, Los borrachos del tablón from River Plate, and La gloriosa butteler of San Lorenzo de Almagro.[1] These groups have become so institutionalized in Argentine soccer and society that Nicolas Balinotti, an Argentine journalist wrote, “Even the President [Cristina Kirchner] has praised them. Without using the words barras bravas she spoke of her respect for them. They have a legitimacy and are seen as part of the spectacle of Argentine soccer.”[2] Characterized by violence and a yearning for money, these gangs shape the lives of any Argentine who follows soccer and represents an endemic problem.

Violence: No One Is Safe

The startling reality is that 179 people have been killed since 1990 due to soccer related violence in Argentina.[3] These deaths have been the result of violence both inside and outside of the stadiums and have occurred because of infighting between different groups of barras bravas who support the same club and fights between barras bravas from rival clubs. In an interview with The Guardian, José Méndez, a member of a barra brava, states, “These people, the bosses who run the barras bravas, they don’t care who you are, if you cross them, they will hunt you down and come after you and your family.”[4] Unfortunately, the majority of those who perpetuate violence within the barras bravas enjoy impunity, since police officers are often corrupt or members of the barras bravas themselves.

One example of this involves two distinct factions of barras bravas who support Boca Juniors, a popular Buenos Aires club. Prior to a planned fight between the two groups, police forces fooled their superiors and handed over a false location for the pre-determined fight, allowing the skirmish to go on between the two sides as planned. This fracas resulted in the deaths of two fans, with multiple others in the hospital.[5] Other examples of violence are easy enough to find. In 2013 Diego Ochoa, the leader of a barras bravas of Newell’s Old Boys, was arrested by local rosarino police for his involvement in two murders; one of the victims was the ex-leader of the very same barra brava.[6]

Alarmingly, the violent nature of the barras bravas is occasionally felt by the very players who they support. Jonathan Bottinelli, a star defender for San Lorenzo, was once attacked by members of the club’s barra brava.[7] After a string of losses, members of the barra brava decided to infiltrate a closed-door practice and yell at the players. During this exchange, Bottinelli asked the barra brava to leave, at which point they beat him.[8] Due to this event, “the Argentine government canceled San Lorenzo’s next match while officials investigated.”[9] The fact that violence can extend to the players raises alarm, as nobody can avoid the wrath of the all-powerful barras bravas.

It’s All About the Money

In addition to being known for violent tendencies, las barras bravas prosper economically from their activities. Reporter Gustavo Grabia claims that the La 12 of Boca Juniors averages revenue of $1,000,000 USD each game day by forcing fans to pay for parking services in the neighborhood that surrounds La Bombonera.[10] This sum represents only a fraction of the illegal revenue that these gangs receive, as barras bravas “cream hundreds of thousands from the game every year through illegal rackets, money laundering and narcotics.”[11] The reach of these gangs can not be understated. According to Gustavo Grabia, the barras bravas receive “up to 30 percent of transfer fees when a player leaves and up to 20 percent of some players’ paychecks.”[12]

These enormous profits often lead to fighting among fans, as different individuals and barras bravas fight for control. An example of infighting between rival barras bravas can be seen in one club in particular, River Plate. The rivalry between Los borrachos del tablón and Los del oeste dates back to 2007 and revolves around control of territory and money-making activities around the stadium. This rivalry between the two barras bravas of River Plate has left several dead and many more injured.[13] An article published by El País states, “This [violence] serves as an example of what occurs in all Argentine clubs, regardless of the status of the club or the geographic region.”[14]

Journalist Jon Sistiaga claims that the members of the barras bravas are not actually fans of the clubs they support. Sistiaga filmed a documentary titled Con las barras bravas (With the Barras Bravas) where he questions the passion that these individuals have for their clubs. He states, “I have not encountered a single member of a barra brava who is capable of naming the complete line-up of their team.”[15] Sistiaga is not alone in his doubts. Monica Nizzardo, founder of the NGO Salvemos al Fútbol (Let’s Save Soccer), says, “The barra brava is a mercenary who does not want to watch the game… He is attentive to the business that revolves around it.”[16] These critics believe that the members of the barras bravas do not actually care about the game but rather are only interested in the economic benefits of membership.

This notion is also supported by the number of soccer related deaths that have occurred since 2002, when severe economic contraction occurred in Argentina. For example, in an 11-year span prior to 2002, from 1990 to 2001, 77 soccer related deaths occured; however, in the 13 year window after this economic crisis known as el corralito, the number skyrocketed to 102.[17] These numbers illustrate that the number of members in barras bravas grew at the same time that economic hardship plagued the country. This conclusion helps support the idea that individuals join barras bravas for economic incentives.

One of the reasons that las barras bravas have been able to solidify their place in Argentine soccer culture and profit from illicit activities is corruption. Due to high levels of soccer-related crime and violence, the Argentine government created a new Security Unit for Live Sporting Events. One of the officers in this force, Carlos de los Santos, comments on the influence of the barras bravas. De los Santos claims, “Corruption is endemic in Argentina and it is what has allowed the barras to get so powerful. The problem is that everyone is taking a cut. It won’t help just throwing the barras bosses in jail, we’ve tried that. To break the barras you have to sever their political connection and root out those police complicit in their activities.”[18] However, this would not be as easy as it sounds, and de los Santos says, “I don’t see how it’s going to be done.”[19] Such pessimism coming from a member of a special Security Unit tasked with targeting the barras bravas speaks to the degree to which the barras bravas have become institutionalized in Argentine soccer.

The Superclásico of Nightmares

River Plate and Boca Juniors. Combined, these two fierce rivals have won 66 Primera División titles and are far and away the two most successful clubs in Argentine soccer. Furthermore, both of these clubs are based in Buenos Aires and are supported by fervent fans and forceful barras bravas. The stage was set for an incredible night. The two clubs were seeded against each other in the Round of 16 of the Copa Libertadores (Liberators Cup), the most prestigious club soccer tournament in Latin America. In the second of the two rounds, where each team plays a home game, the unthinkable happened. After halftime, while the River Plate team and coaches returned to the field, members of a Boca Junior’s barra brava released pepper spray into the tunnel. The pepper spray got into the eyes of the River Plate players and caused burns on their backs and shoulders. After a 90-minute delay and debate, CONEMBOL officials, the governing body of South America soccer, decided to suspend the game and disqualify Boca Juniors from the competition, which advanced River Plate to the quarterfinals. Ironically enough, in part due to the actions of Boca Juniors’ fans on this night, River Plate, their biggest rival, advanced in the tournament and ended up claiming the Copa Libertadores championship, becoming club champions of Latin America.

The reason for the attack, according to pundits, is surprising to those who are unfamiliar with Argentine soccer. Experts on barras bravas suggest, “The main motivation was not hatred for a traditional adversary, rather the need to ‘mostrar huevos’ [assert their masculinity] and capacity for violence.”[20] The fact that this debacle, which caused the elimination of a team from the most prestigious tournament in Latin America, stems from the actions of a barra brava shows the warped nature of these gangs and of Argentine soccer culture. The president of Boca Juniors, Daniel Angelici, shares the sentiment that clubs have become helpless to the actions of barras bravas. During a news conference regarding the incident he stated, “An aerosol [the type of can used to shoot pepper spray] is small, I don’t know how it works, but it is very powerful, it can fit in your pocket and when there are almost 50,000 people it can get by security” [21] He continued to lament that “this is society’s problem, not football’s [soccer’s] problem.[22]

Hopefully, seeing a match that had the potential to be one of the most exciting in the history of Argentine soccer ruined by the barras bravas has had an impact on the country. Leading the fight against the barras bravas is the NGO Salvemos al Fútbol, which raises awareness about the negative effects of these groups. Organizations such as this one have the power to draw attention to this problem; however, the Asociación del Fútbol Argentino (Argentine Soccer Association) needs to take concrete action to quell the influence and institutionalization of the barras bravas if Argentina wants to truly rid itself of this problem.