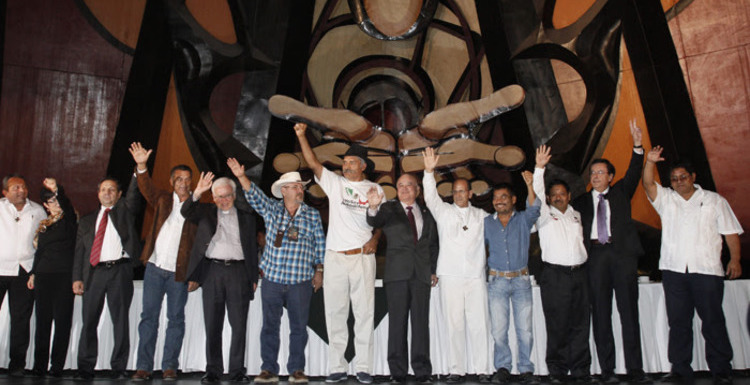 Citizens in Michoacán, frustrated by the government’s inadequate response to violence and insecurity, formed armed autodefensas and launched an offensive against the Knights Templar. To date, the militias’ offensive appears successful. In collaboration with federal security forces, hundreds of suspected Knights Templar members have been arrested, several top leaders have been killed, and areas previously under the group’s control have been retaken. Now, autodefensa leaders are calling for the creation of a Frente Nacional de Autodefensas to “despertar a la nación y demandar justicia y seguridad pública.” José Manuel Mireles, a founder of the autodefensas, said during the Encuentro Nacional de Autodefensas that this was not an appeal for an armed insurrection, but rather a demand for public security and justice. The slogan “Todos Somos Autodefensas” has been adopted as a demonstration of national solidarity.

Still, the Mexican people should be wary about the potential trajectory of such a group before embracing them as an effective solution to Mexico’s endemic insecurity. Three historical cases regarding autodefensas from fellow Latin American countries provide useful lessons. Guatemala and Colombia show how autodefensas can spiral out of control and inflict terrible damage. Perú shows how autodefensas can successfully act in conjunction with security forces to defeat a common enemy.

During Guatemala’s civil war, the central component of the government’s counterinsurgency strategy in the early 1980s was the Patrullas de Autodefensa Civil (PAC). Created and controlled by the military, the PACs were staffed by local campesinos and functioned as civilian adjuncts to the Guatemalan army. Their main task was to protect their communities from guerrilla and “subversive” forces. Evidence suggests, however, that some members disregarded the rule of law. In some areas, the PACs used their official state backing to settle old scores and eliminate enemies for reasons completely unrelated to counterinsurgency. This resulted in thousands of human rights abuses.

A similar situation occurred in Colombia during the 1990s with the rise of armed civilian paramilitary groups. Most of these paramilitaries operated against leftist insurgent groups: the Fuerzas Armadas Revolucionarias de Colombia (FARC) and Ejército de Liberación Nacional (ELN).Yet the paramilitaries soon took on a life of their own, evolving into organizations that engaged in drug trafficking and committed widespread human rights violations.

Peru is a somewhat different story. In the early 1980s, abuses committed by the Sendero Luminoso provoked discontent and eventually prompted the emergence of civilian armed patrols, or rondas campesinas. In order to fight the Shining Path, the Peruvian state co-opted the rondas campesinas, forming Comités de Autodefensa y Desarrollo (CAD), and provided them with formal recognition. Yet the Peruvian state also placed the CADs under the jurisdiction of the army, requiring written reports on their activities. The government also controlled the weapons that were made available to the CADs. Additionally, security forces did not hesitate to indict patrollers who engaged in illegal activities, like drug trafficking. Such controls and protocols were designed to make the CADs more accountable and to prevent the rise of civil defense “warlords.”

To successfully follow Peru’s example, it will be important to legally specify the functions and roles of any Frente Nacional de Autodefensas. Once vigilantes acquire coercive power the temptation to use it for private ends is often simply be too great. Yet by legally defining the functions and roles of CADs and exercising strict oversight, Peru experienced comparatively fewer legal and human rights violations by autodefensas than Guatemala or Colombia. Many of the Peruvian groups also demobilized peacefully and have positively contributed to civil society. To successfully emulate the case of Peru the Mexican government must invest heavily in oversight of the autodefensas.