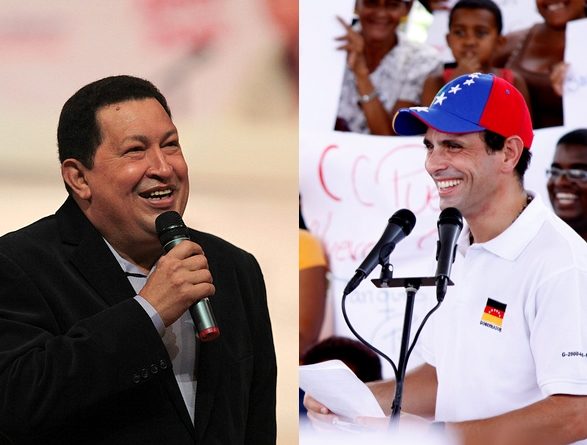 Venezuela’s presidential election set for October 7 is rapidly approaching its denouement. On that day, Venezuelans will make a final determination on whether to extend Hugo Chávez’s presidential regime or usher in a new era with their “golden boy” opposition candidate, Henrique Capriles. The very thought of an opposition victory, based on the enormous amount of baggage that Chávez brings to the election booths, is not nearly as unlikely as in prior elections. In fact, many journalists and political analysts have brought up growing concerns within the Chávez camp, insinuating the real possibility of Capriles’s victory. A more probing investigation into the issues which presently confound Venezuela’s voters may provide a greater insight as to how the country may intend to vote on October 7.

Venezuela today, in part, resembles a war zone. Venezuela’s crime rate, reaching unprecedented levels in recent months, is on everyone’s mind, as is the buzz on the street. Muggings, ambush attacks, and police killings, coupled with a staggering level of unsolved crime, have plagued the neighborhoods of the capital, Caracas. At the present time, many fear to leave their homes at night. A recent study found that “homicides in Venezuela have risen to 19,336 last year, compared with 4,550 in 1998,” when Chávez first took office. Additionally, despite the homicide rate soaring over thirteen years, the number of arrests of suspects has fallen by more than half. [1] All of this could spell big trouble for Chávez, even if he is not to be specifically blamed for the bad news that the president must face on a daily basis.

Opposition candidate Henrique Capriles has pummeled President Chávez relentlessly for failing to protect the safety of the average Venezuelan. However, the personal attacks may not be all that effective in light of Chávez’s tactic of insisting that nothing can be done about the increasing crime levels. Chávez has habitually made every effort to dismiss, or at least minimize, what could be done to combat or even deter such criminal acts, nonchalantly claiming that Venezuela’s level of crime can be found in almost every country in the world, or blaming the recent uptake on poverty and police corruption on the power and influence of capitalism. When probed as to why he would not increase the number of police in the country, Chávez tartly replied that “hiring more police is a right-wing policy.” [2]

Even the media, arguably increasingly under the influence of the Chávez administration, is constantly  running reports on mounting violence. The multiplications of Venezuela’s crime rate cannot be ignored. Media reports of undeterred and unresolved crime have resulted in a consistently further negative reaction towards the Chavez administration reputation. Essentially, blame in the media subtly has shifted from the criminals themselves to President Chávez’s criminal enforcement policies, or rather the lack thereof. Venezuelans also are taking notice of this lack of leadership. At a recent conference held at George Washington University on September 17, guest speaker Luis Christiansen, President of Consultores 21, observed that “47.1 percent of Venezuelans would trust Capriles to combat the insecurity in the streets over the 44.6 percent who trust Chávez.”

Aside from problems with ongoing violence, Venezuela is facing an imminent economic crisis. President Hugo Chávez has made valiant efforts in order to optimize the economy’s image in time for the upcoming election. To treat the issue more adequately, in the first half of 2012, Chávez has increased spending by 34 percent from a year ago, and has encouraged private consumption, and promoted social programs on behalf of the elderly and children living in extreme poverty. Also Chavez has pledged to extirpate a three million-housing deficit. [3]. While Venezuela’s GDP under Chávez has increased according to statistics, many economists view President Chávez’s economic decisions as contentious and highly controversial. As a result of his economic policies, it can be argued that the Bolivar will require immediate devaluation following the October election. For example, Venezuela’s imports grew 9.1 percent to $13.5 billion USD, while non-oil exports fell 11 percent, while consumer prices rose 19.4 percent. [4]

Opposition candidate Henrique Capriles, a conservative businessman with a modernizing approach, has presented himself as a latter-day progressive protector of the working class. Capriles’s biggest challenge will be attempting to win over the many Venezuelans who are dependent on government jobs and subsidized social programs provided by the Chávez administration. Also, perhaps a majority of the population may still believe that a derechista is a derechista, whatever the garb. For Chávez’s part, it should be noted that nearly 50 percent of Venezuelan adults are government workers or beneficiaries of its social programs. Capriles also faces an electorate much of whom are devoted to socialism. Luiz Navarro, writer for The Guardian, commented in a recent article, “High Stakes in Venezuelan Election”, that “in today’s Venezuela to be rightist is out of fashion.” Navarro reinforced this statement by expressing that Capriles “can’t oppose this ideal without damaging his chances of victory. He can’t express his political and economic proposals clearly, for he would be rejected.” [5]

Another point revolving around this election is the promise of a fair electoral process. Former U.S President Jimmy Carter publicly stated that “of the 92 elections that we’ve monitored, I would say that the election process in Venezuela is the best in the world.” [6] While some foreigners, like Carter, commend Venezuela’s high tech ballot system, there are those inside the country who feel otherwise; and voter secrecy, in particular, is of the greatest concern. In 2004, the names of more than 2.4 million people who had signed a presidential recall petition were made public. Government agencies were accused of firing and discriminating against people on the Lista Tascon. In 2005, Chavez called on his supporters to stop discriminating against anti-Chávez supporters, but it left many wary of openly opposing the administration. Even of greater concern, while the government has failed to release crime statistics since 2004, Chávez’s administration boldly promotes and praises the voter turnout rates. In fact, many skeptics believe that Venezuela’s high voter registration rate is suspicious of being affected by tampering. Numerous election watchdog groups have claimed voter forgery. Although, these accusations raise considerable suspicion, they bare minimal evidence or support.

On a separate note, President Chávez’s waning health remains a persistent concern to President Santos as much as it is to Havana. Whether or not Chávez wishes to acknowledge his late stage of cancer, some indecisive voters remain skeptical of reelecting a candidate who is so secretive about his health problems. Many argue that Venezuela’s Chávez is nearing his final race, only partly due to his mysterious covert battle with cancer. In part, Capriles relishes in Chavez’s undetermined health as a campaign issues. If Chavez’s health were to hinder him from running as the incumbent in this election, then Elias Jaua, Venezuela’s Executive Vice President, would be called upon to fill in for Chavez. In this case, the opposition party probably would have a better chance of winning without Chavez to head the Bolivarian Revolution. If Chávez were to win the presidential race, but if his illness barred him from running the country, then Jaua would take over as president, as specified by the Constitution.

The majority of recent polls conducted by Consultores 21 indicate Capriles has developed a slight lead in recent months, but nothing is in the bag and it would be short-sided to settle on this turnout. It should be noted, however, that several polling groups, such as Datanalisis, actually find Chávez favored by a considerable margin. The conflicting polls make it tough to interpret the true mentality of Venezuela’s secret majority. Public optimism versus pessimism regarding the future of the Venezuelan population is growing, but may not be fatal for Chávez. Since the beginning of Chávez’s presidency, national optimism has wavered considerably. According to Luis Christiansen, President of Consultores 21, “In 1999, optimism in Venezuela was around 40-50 percent, while in 2003 pessimism reached 52 percent and now in 2012 we have seen a plateau when contrasting both optimism and pessimism.” Significantly, for the first time in Hugo Chavez’s three terms as president, his approval rating dropped below 50 percent.

As indicated by a divided public opinion, for the first time in his thirteen-year reign, the Chávez presidency is being heavily challenged for reelection. This tenacious presidential race draws comparison to a championship boxing match: Three-time defending champion, Hugo Chávez against top contender Henrique Capriles. However, this is not the first meeting between the Venezuelan candidates. Capriles attempted a knockout of Chávez, in 2002, when he took part in a coup against the head of the Bolivarian Government. Venezuelans will be insisting that they alone must bear the heavy burden of judging their candidates’ performances, while the rest of the world waits to hear the results.