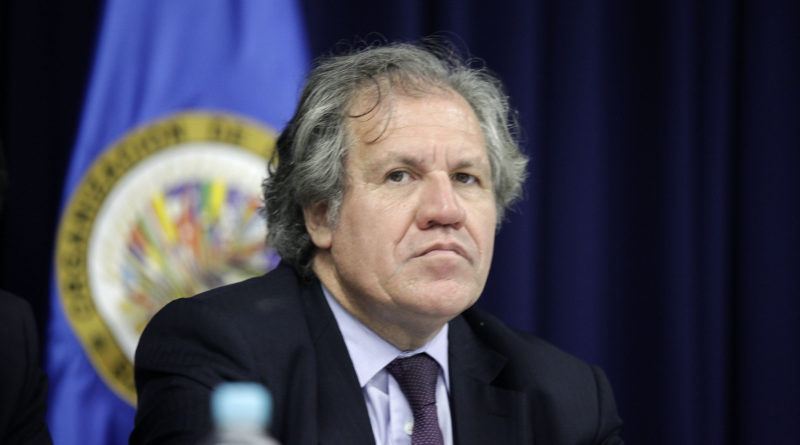 A meeting of foreign ministers and ambassadors of the Organization of American States (OAS) convened last week to discuss the ongoing efforts of OAS Secretary General Luis Almagro to use the Inter-American Democratic Charter against the government of President Nicolás Maduro in Venezuela. Though there was no vote on whether to apply the Charter,[1] which provides for diplomatic intervention for any member that has experienced a “rupture in the democratic order,” the meeting at the OAS’s downtown Washington headquarters provided Almagro with another opportunity to voice his strong criticism of the Maduro government.[2]

The meeting had been scheduled so that Almagro, a former foreign minister in the José Mujica government in Uruguay, could read from a 132-page report articulating his claims that Venezuela has suffered a democratic break. Venezuelan Foreign Minister Delcy Rodríguez, speaking to the gathering on behalf of the Maduro government, argued that the agenda should be rejected on the grounds that it constituted an inappropriate attack on a member state and could serve as a ruse for interventionism.[3] She said that Almagro was using the OAS “to harass and delegitimize the government of Venezuela.”[4] Her proposal was rejected by a vote of 20 to 12 with two abstentions, meaning that Almagro was able to proceed with reading the summary.[5]

Though the meeting was for foreign ministers and ambassadors from member states, Venezuelan opposition figures also showed up at the event in the hopes of speaking in favor of the Charter’s application. President of the opposition-controlled National Assembly, Henry Ramos Allup, met with Almagro prior to the session starting, but did not address the gathering.[6] Since the OAS is a forum for governments, not parliaments, any opposition representative would have needed an invitation from a member state government representative to address the session. There are conflicting accounts of what took place: according to one report, Ramos Allup was unable to deliver his message because no country provided him with the opportunity to make a statement, though another source claims that he voluntarily decided not to speak.[7] He instead watched the proceedings from a monitor in a side room before addressing a crowd of opposition demonstrators who were protesting out front. There was, however, a discussion inside the chamber of an opposition-prepared summary about the situation in Venezuela.

As expected, Almagro issued harsh words about the beleaguered Maduro administration, accusing his government of being responsible for resisting offers for humanitarian help, jeopardizing the welfare of the Venezuelan public, and using authoritarian tactics to maintain power.[8] Paraguay was the most vocal critic of Venezuela amongst the Latin American contingent in attendance. The U.S. representative unsurprisingly also issued a strong condemnation of the Maduro government while posing as the hemisphere’s champion of human rights and international standards.

These sentiments were praised by Ramos Allup outside the OAS. He said through a bullhorn to the gathered opposition supporters: “We are convinced that we must fight to change our current administration; otherwise things will escalate and get worse. We want to use the democratic, constitutional and electoral methods to change our government.” In addition, Ramos Allup continued his media campaign later in the day at a speaking event at Georgetown University.

But in a further setback for the opposition faction, the session ended without any declaration or announcement of a follow-up meeting to consider applying the Charter. Almost all ministers expressed support for the UNASUR-sponsored dialogue between the Maduro government and the opposition to resolve the economic crisis, which is being accompanied by a former Spanish prime minister (who was present at the OAS) and two former Latin American heads of state. Perhaps most damaging of all for the opposition, several of the countries who had expressed support for the reading of Almagro’s summary, including Suriname and the Bahamas, nonetheless made clear that they are opposed to application of the Charter.

Last week’s gathering has furthermore come in the midst of a surprise meeting between Rodríguez and U.S. Secretary of State John Kerry on the fringes of an OAS summit in Santo Domingo, Dominican Republic, in which Kerry agreed to a dialogue to reestablish full diplomatic relations between the two countries. During the meeting, Kerry lent his support to the UNASUR dialogue and also appeared to distance himself from Almagro’s aggressive posturing. He stated: “At this moment, I think it’s more constructive to have dialogue than to isolate.”[9]

But neither Almgro nor the Venezuelan opposition appear to be deterred by the failure of last week’s meeting to bring about an application of the Charter or this unexpected about-face on the part of the U.S. State Department.

Almagro’s isolation and silence on Brazil

The outcome of the session exposes Almagro’s considerable isolation in his stance on Venezuela, at least in terms of the views of OAS member states, who technically speaking are his employers. No action was taken to endorse the proposals that his report suggested, far less to make any moves toward applying the Charter. The meeting did provide significant opportunity for the opposition to create a press circus, however, and without an unequivocal repudiation from member states the prospect of the Charter still hangs in the air. This fact will serve as an excuse for opposition leaders to continue to stall on entering into the UNASUR-sponsored talks with the government and will also embolden them in their attempts to oust Maduro from office.

Their argument that a push for the Charter is consistent with support for the dialogue, therefore, is simply absurd. Whereas Maduro has been promoting the talks for several months, opposition figures have largely failed to show up for scheduled meetings.[10]. So rather than incentivizing them to participate in a spirit of good faith, having the Charter hanging in the balance will encourage further intransigence and, worse, could provide political cover for extreme elements to engage in violent attempts to destabilize the government. What’s more, despite opposition claims that it is acting on behalf of the Venezuelan people, internal polling suggests that the majority of Venezuelans do not support application of the Charter, and also that a majority does support the UNASUR dialogue.[11]

But such considerations hardly even merit discussion when the entire Democratic Charter saga is taken in the wider context of the region. Whereas the democratic credentials of Venezuela are on display for all to see with the recall effort that is currently being launched by the opposition, whose victory in last year’s legislative election exploded claims of chronic vote rigging, the OAS has done nothing to denounce the flagrantly obvious coup that has taken place against the democratically-elected government of Dilma Rousseff in Brazil. Despite being one of the few leading politicians who is not facing corruption charges for personal enrichment, Rousseff was indicted on vague accusations of fiscal irregularities; charges which analysts in the Brazilian Senate subsequently found to be completely false.[12] This development adds to a long list of revelations that have served to undermine the legitimacy of her removal from the presidency.[13] Leaked audio files have now made it beyond doubt that Rousseff’s impeachment was a deliberate political calculation to derail corruption investigations against several of Rouseff’s rivals. The leaks revealed that then-Senator (and now planning minister) Romero Jucá, and former oil executive Sergio Machado, both of whom are targets in the “car wash” probe, conspired to oust Rousseff in order to kill the investigation once she was out of office.[14]

The hypocrisy of talk about human rights abuses from the opposition and its U.S. backers is even more shocking when one considers that there has been no kind of condemnation of the Mexican government for the killing of eight people by state actors in Oaxaca this month, or countless other human rights violations across the region. When looked at in an evenhanded manner, the singling out of Venezuela is just the latest chapter in the long history of the United States and its internal allies attempting to oust the Chavista government in order to install an administration filled with friendlier actors who will do its bidding and reopen the country to neoliberalism, U.S. imperialism, corporate profiteering and multinational dominance. Almagro has apparently become the United States’ latest pawn in this in this long destabilization campaign, and has shamelessly abused his position as Secretary General in order to do the Empire’s dirty bidding. The contrast between his apparent obsession with what is happening in Venezuela with his conspicuous silence about the coup Brazil and continued state violence in Mexico has disgraced his office and delivered a fatal blow to whatever shreds might have been left of the OAS’s credibility.

[13] Glenn Greenwald, Andrew Fishman, and David Miranda, New Political Earthquake in Brazil: Is It Now Time for Media Outlets to Call This a “Coup”?, The Intercept, May 23, 2016. Accessed June 29, 2016: https://theintercept.com/2016/05/23/new-political-earthquake-in-brazil-is-it-now-time-for-media-outlets-to-call-this-a-coup/