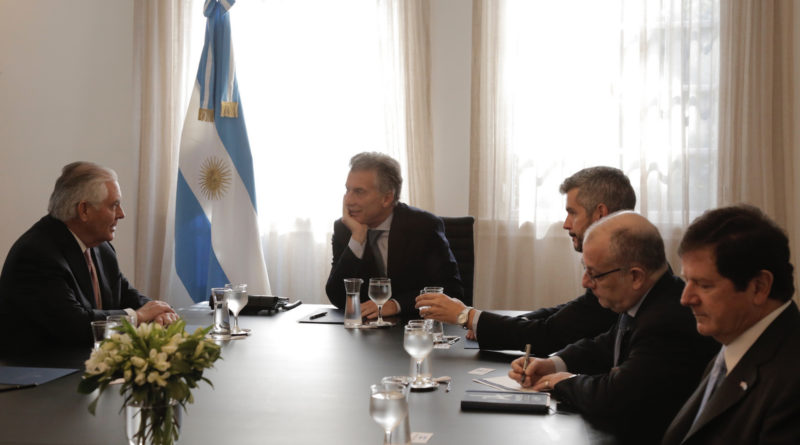 Today, Argentina suddenly ranks among the United States’ top allies in Latin America, united by cooperation on security and defense initiatives. Since Argentine president Mauricio Macri took office in 2015, one common goal of these two nations has been to isolate the Chavista regime of Nicolas Maduro’s Venezuela. The U.S. and Argentina have maintained their cooperation despite profound economic differences at the moment.[i]

In early February, U.S. Secretary of State, Rex Tillerson, arrived in Buenos Aires to meet with Argentine government officials about the bilateral agenda of “economic growth” and “cooperation on security issues.”[ii] The visit of Secretary Tillerson to Argentina was part of his tour around Latin America. State Department spokesperson, Heather Nauert, said that Tillerson, along “with regional partners would undertake to promote a safe, prosperous, democratic and energy security hemisphere.” Nauert went on to say that Tillerson would “advocate for greater regional attention to the crisis in Venezuela” during his visit to Latin America.[iii]

This was Tillerson’s second visit to the southern country, but his first as Secretary of State. In June 2016, he visited President Mauricio Macri in the Casa Rosada and gave his strong support for Macri’s Cambiemos (Let’s Change) alliance.[iv] President Trump also knew about and has supported Macri’s government prior to he has assuming office, having worked with the Argentine president’s father on real estate deals in the 1980s.[v]

Tillerson’s first meeting of his present tour was with Argentine Foreign Minister Jorge Faurie. At the press conference after the meeting was held, both redoubled their attacks on Venezuela’s president Nicolas Maduro, saying they are considering implementing additional oil sanctions in order to pressure the Venezuelan government. Earlier this month, Secretary Tillerson also challenged the Venezuelan military to be “agents of change” in the country, stating, “we cannot allow the destruction of Venezuela,” before insisting that the “disagreement” between Argentina and the United States have with Venezuela is with “the regime” of Maduro and not with its citizens who are “suffering greatly.” Minister Faurie agreed with Tillerson, and noted that “funding control” of Venezuela is an important tool that they both had considered during their meeting.

Despite the cooperation regarding Venezuela, the U.S. and Argentina nonetheless have had serious disagreements over trade issues. In 2016, President Macri had returned from the United States after his first meeting with Donald Trump with a symbolic opening of lemons exports to the US market. However, the United States quickly established major obstacles to the entry of Argentine biodiesel to this market.

While Tillerson was in South America, Argentina’s Minister of Security, Patricia Bullrich, announced in Washington that the Macri administration would allow the U.S. to build a military base in Posadas, Misiones (bordering Brazil and Paraguay.) Bullrich says her government is creating “an analysis center with Paraguay and Brazil (and the U.S.) to figure out where, how, and with whom narco traffickers operate” at the triple border region.[vi] Benjamin Gedan, Director of the Argentina Project at the Wilson Center, said about this aspect of Argentine-US relations: “For the United States, counter-narcotics and counter-terrorism appear to be the top priorities in this relationship” and adding that “security cooperation between Argentina and the United States has remained excellent in the Trump era.”[vii]

Last month, the Argentine ambassador in Washington, Fernando Oris de Roa, clarified Argentina’s desire to cooperate with the US despite the economic barriers that the latter has set up around trade. He declared in an interview with the Argentine newspaper Clarin: “The U.S. has a political interest in us and we have an economic interest in them. The United States is interested in the issue of security, international support, the fight against terrorism and drug trafficking”. According to Oris de Roa “our challenge is to work with the US giving satisfaction to the interests they have with respect to us and at the same time, in a diplomatic way, that can translate into a positive attitude towards our economic agenda.”[viii] In short, Argentina hopes to leverage its security cooperation with Washington in exchange for further economic gains.

According to Argentine sociologist Juan Gabriel Tokatlian, “the Argentine ambassador in U.S. is repeating, in a very different world context, the logic that guided the foreign policy of Argentina in the 1990s. Macri’s government has forgotten that the ‘quid pro quo’ between politics and economics did not work in the past; particularly during the 2001-02 crisis. Does anyone in the Casa Rosada really believe that pandering to Washington in the ‘political’ will be effective in the ‘economic’?”[ix]

Despite warnings, like those from Tokatlian, Argentina seems to be more than willing to support the US in its goal of isolating Venezuela even though such economic-relations and they are currently discussing how to work together on fighting drug trafficking, counter-terrorism and preparing for the upcoming G-20 conference in Argentina next November.

[vii] The Bubble. “Bullrich Meets With US Officials for Enhanced Cooperation in National Security.” February 9, 2018.