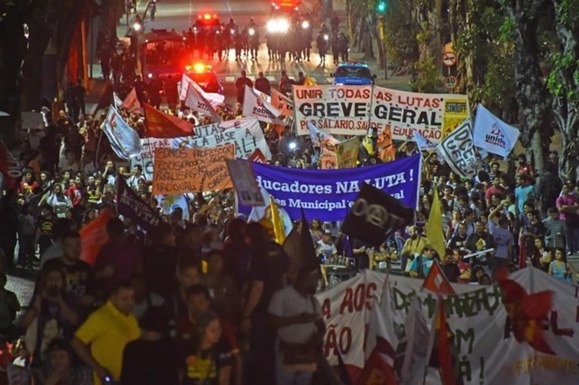 Known for being the champion of a record five World Cups, the Brazilian nation erupted into jubilee after being awarded the rights to host the FIFA World Cup in 2007. Seven years and $11.7 billion USD later, frustrated demonstrators began taking to the streets of São Paulo on May 15 to demonstrate their anger over the massive debt accumulated by World Cup construction [1].

In the latest of incidents, thousands of protestors blocked numerous roads and two key highways in São Paolo. At least six have died in connection with the protests, mainly at the hands of civilians, who struck them with their vehicles as they attempted to evade the rally-filled streets [2]. Brasília, the capital of Brazil, has also experienced an influx of protestors. Activists in Rio de Janeiro and São Paolo were dispersed by security forces that used canisters of tear gas in order to evict them [1]. According to local media reports, some 234 have been arrested in a 24-hour time span [3].

Although united under the banner of the upcoming World Cup events, various motives have brought disgruntled activists into the streets. Some cite irresponsible, even reckless spending as their primary reason for demonstrating; the originally privately-funded project has robbed the government of resources that could have been allocated towards much-needed social programs. Others vouch for the 14 workers who died during the construction of soccer stadiums [4].

However, groups such as the Homeless Worker Movement (Movimento dos Trabalhadores Sem Teto) have joined the ranks of the protestors in order to publicize the eviction of dwellers living in shantytowns knows as favelas [5]. Thousand of these impoverished communities and crime-ridden slums were demolished in order to erect new stadiums. Other favelas, located on prime real estate, were transformed into luxurious condominiums [6]. Those who were not forcefully evicted experienced an increase in their housing cost, resulting, in many cases, in their eviction. Citizens living near prime construction locations stated that prices have risen from “$350 Real (R) per month to $700R ($316 USD).” [7]

Reports by those campaigning for the evictees claim that as many as 1.5 million Brazilians were forcefully evicted from their homes [7]. All were promised alterative housing. Although in some cases people were actually moved into new housing, not all have been housed by President Dilma Rousseff’s administration.

However, although protestors have raised awareness of these grievances for months, the government has continued to focus on quelling international concerns about the tempo of construction by accelerating all World Cup-related projects and announcing that they would be willing to spend $180 billion USD in long-term expenditures on FIFA infrastructure [8].

Needless to say, the streets of Brazil are not unaccustomed to sporadic social demonstrations. Last year, over 1 million Brazilians took to the streets to decry the Rousseff administration’s woeful conduct of programs related to health care, education, and rising transportation expenditures [9]. Corruption and a lack of political transparency were also addressed. While the demonstrations succeeded in pressuring the government to increase medical treatment for citizens living in remote locations, the anti-World Cup protestors now appear to be garnering less support [10].

Whether or not their movement is receiving the same number of protestors as it did last year, Brazilian civil society has rapidly realized its political potential. However, while intimidated by ongoing protests, the government has not wasted time in ensuring that they are adequately prepared for social unrest.

Foreseeing turmoil before the World Cup commenced, the Rousseff administration has formed a partnership with Condor Nonlethal Technologies, a Brazilian arms distributor who also furnished the Turkish government with tear gas during Turkey’s protests. Thus far, Brazilian authorities have paid $22 million USD for over 75,000 units of non-lethal weapons [11]. These devices, specified to be used by police during 2014 World Cup events, include 50,000 canisters of pepper spray, in addition to an assortment of devices ranging from rubber bullets to smoke grenades. Ironically, the Brazilian government is using taxpayer money to buy tear gas and rubber bullets to disperse taxpayers, some of who are protestors.

The diverse activists filling the streets of Brazil should not immediately be dismissed as violent vandals. As the leader of the Homeless Worker Movement, Guilherme Boulos, has stated: “Our goal is symbolic. We don’t want to destroy or damage the stadium. What we want are more rights for workers to have access to housing and to show the effects that the Cup has brought to the poor.” [12]

The various activists who are currently in the streets in opposition to the governments program should be seen as an organization of concerned citizens who only want to see the advancement of Brazil and its people take place. All of them want to improve their spheres of social life. Each of them adheres to a collective mentality in addressing the needs of the impoverished and homeless. True, some may have joined the protests with the intention of vandalizing, but the fact of the matter is that their presence is overemphasized.

Understandably, the Brazilian government wants to minimize protests that could hinder the completion of its 12 soccer arenas. As an emerging member of the international community, it also more generally wants to be taken seriously by its counterparts. While successfully hosting the World Cup would boost its reputation as a respectable nation, militarizing its security forces in order to suppress dissent will not.

If anything, garnering the respect of the global community will not only come through hosting a one-time event, but by being attentive to the needs of its populace. While the expansion of social programs may frighten international creditors who fear that a growing deficit would minimize the possibility of Brazil repaying its debt, supplementing the social safety net will ensure the continued advancement of individuals who find themselves on the less prosperous side of capitalism.

President Rousseff’s government should embrace the protestors’ demonstrations as an act of civil duty. The demonstrations not only shine a beacon of light into the Brazilian government’s current institutional deficiencies, but also develop a roadmap for steps that the country should take in order to advance Brazilian society. As such, it would serve the Rousseff administration well to pay attention to the demands of the protestors, since they are the electorate Rousseff up to now has claimed to represent and who she must effectively appease in order to ensure her reelection in the upcoming elections.