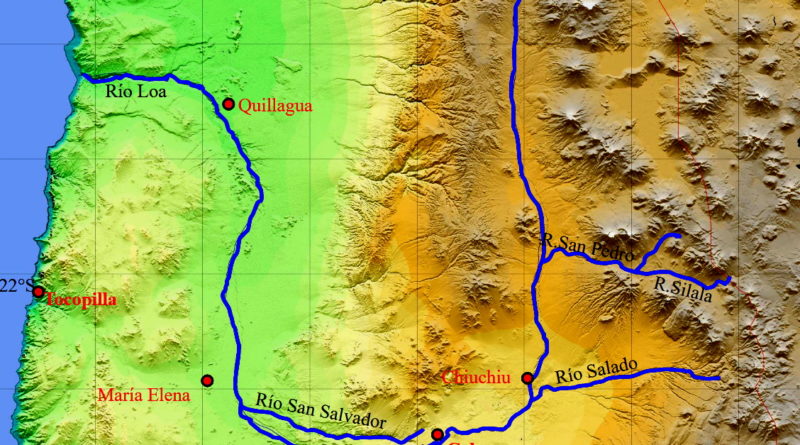 The Atacama Desert is the second driest place on earth, and the watersheds of the rivers in the region, the Lauca, Maurí, and Silala, have long been in dispute. In a time when climate change impacts hydrographic basins everywhere, the dispute over the remote Silala watershed, in particular, has become a testament to the importance of fresh water. In 2007, “the underlying issues of politics, economics, sovereignty, and history” led the U.N. Environmental Programme to conclude the Silala was “one of the most hydropolitically vulnerable basins in the world.”[i]

Before the War of the Pacific (1879-1884), the Silala Basin, known as the Siloli Basin in Chile, was located entirely in Bolivian territory, but after Chile occupied the Bolivian littoral during the war, it became a shared resource. The waters of the Silala originate in wetlands formed by groundwater springs that discharge in the Bolivian province of Sur Lípez, department of Potosí. While some Bolivians argue the existence of the Silala River is a myth created by Chile, credible geographical, topographical, and historical evidence exists to suggest the Silala springs flowed across the modern-day Bolivia-Chile border prior to the construction of man-made canals.[ii]

In 1908, the Antofagasta and Bolivia Railway Company (FCAB), a Chilean company operating between Antofagasta in Chile and Oruro in Bolivia, applied for a concession to use the waters of the Silala to power its steam engines. After the prefecture of the Bolivian department of Potosí granted the concession, the Chilean concern constructed canals in Bolivia to channel the waters of the Silala into the San Pedro de Inacaliri River in Chile which later joins the Loa River before finally emptying into the Pacific Ocean. In 1961, the FCAB replaced its steam engines with diesel power, and the waters of the Silala were no longer used for the purpose for which the 1908 concession was granted. In the interim, the commingled waters of the Loa River were put to other uses, notably as process water for the Chuquicamata copper mine, one of the world’s largest open pit mines and the source of a considerable amount of the Chilean state’s income.

In 1997, the Prefect of Potosí, Omar Manzano, revoked the 1908 concession to the FCAB on the grounds the waters of the Silala had long been used by Chile for purposes other than those stipulated in the original agreement. In 1999, the Bolivian government put the Silala waters out to public tender. But the private Bolivian company awarded the contract, DUCTEC S.R.L., failed to collect any money from the FCAB or the Chilean state-owned National Copper Corporation. In 2003, Bolivia rescinded its contract with DUCTEC on the grounds of nonperformance, and in 2004, it established with Chile a bilateral group to work the Silala issue. The group met several times over the next few years but failed to resolve the problem. Throughout this period, Bolivia contended the Silala was an exclusively Bolivian watercourse, and Chile argued it was an international river. Bolivia also sought compensation for the years in which Chile used the water for purposes other than locomotive power. In 2016,h Bolivian officials suggested Chile owed Bolivia $1 billion dollars in recompense.[iii]

In its essence, the Silala watershed dispute centers on two fundamental questions. First, do the waters of the Silala constitute an international river or in modern legal parlance an international watercourse? Second, if so, do they originate from groundwater springs fed by an aquifer straddling the Bolivia-Chile border? Article 2 of the U.N. Convention on the Law of the Non-Navigational Uses of International Watercourses defines a watercourse as “a system of surface water and groundwaters constituting by virtue of their physical relationship a unitary whole and normally flowing into a common terminus.” An international watercourse is “a watercourse, parts of which are situated in different States.”[iv] In the case of the Silala, any answer to the above two questions is complicated by the limited data available on the relationship between the surface and groundwater of the Silala and between the transboundary aquifer and watershed. Another complication is the unsettled nature of international water law regarding transboundary groundwater. Even if the Silala springs flowed overland from Bolivia to Chile prior to canalization, for example, the issue of whether the flow was intermittent or perennial could impact on the legal status of the waters. Due to these uncertainties, Bolivia and Chile both refused to sign the U.N. Convention on the Law of the Non-Navigational Uses of International Watercourses when it was adopted in 1997.

In June 2016, Chile instituted proceedings against Bolivia at the International Court of Justice at The Hague regarding the status and use of the waters of the Silala River system. In its Application to the Court, Chile maintained the Silala River originates from groundwater springs a few kilometers northeast of the Bolivia-Chile boundary. It then flows across the border into Chile where it receives additional waters from various springs before reaching the San Pedro de Inacaliri River. Chile further noted that the waters of the Silala River historically have been used in Chile for different purposes, including the provision of water to the city of Antofagasta and other Chilean towns. Chile requested the Court to adjudge and declare that “the Silala River system, together with the subterranean portions of its system, is an international watercourse, the use of which is governed by customary international law” and “Chile is entitled to the equitable and reasonable use of the waters of the Silala River system in accordance with customary international law.”[v] In a six-volume Memorial presented to the Court in mid-2017, Chile expanded on the above arguments, developing historical, scientific, and technical arguments in support of its claim that the Silala is an international watercourse.

In an August 2018 Counter-Memorial, Bolivia argued the Silala was not an international watercourse and thus not an international river. It described the Silala as a water channel which originated in Bolivia and crossed over the border in artificial ducts constructed by Chileans in the early twentieth century. Bolivia asked the Court to declare the Silala was not an international watercourse; consequently, Chile had no rights over its waters. Bolivia also asked the Court to find that it enjoyed full sovereignty over the water flowing through the artificial channels and drainage mechanisms built by Chileans on Bolivian territory. Finally, Bolivia argued that any delivery of the waters of the Silala from Bolivia to Chile, including the compensation to be paid for said delivery, was subject to the conclusion of an agreement with Bolivia.[vi] Chile replied to the Counter-Memorial of Bolivia in mid-February 2019, reiterating its argument that the Silala was an international watercourse which flowed naturally from Bolivia to Chile through a ravine formed several thousand years ago.[vii] In response, Bolivia repeated its argument that the Silala was not an international watercourse because the waters of the springs of the Silala flowed artificially into Chile through canals constructed by Chileans in the last century.[viii] The written phase of Court proceedings was expected to conclude in May 2019 when Bolivia presented a six-volume Rejoinder to the Court. In a main document with five annexes, Bolivia expanded on its earlier arguments but added nothing substantially new to them.[ix] At that point, the Court in a surprise move authorized the submission by Chile in September 2019 of an additional pleading related to the counter claims of Bolivia, delaying the start of oral proceedings.

The decision of the International Court of Justice in the “Dispute over the Status and Use of the Waters of the Silala (Chile v. Bolivia)” will set a precedent for the adjudication of similar disputes regarding hydrographic basins around the world . Given the climate change crisis and population growth fresh water resources will likely remain under growing pressure in many areas of the world. Consequently, it is difficult to overstate the importance of transboundary aquifers and watersheds, most especially given the early stage of development of the international law regulating them.

Regionally, the Court’s decision on the status and use of the waters of the Silala will bring closure to another dispute outstanding from the War of the Pacific. In an era of growing concern for fresh water resources, it may also serve as a stimulus for Bolivia and Chile to resolve the Lauca River dispute and for Bolivia and Perú to resolve the Maurí River controversy, other issues stemming from the War of the Pacific. Ideally, the resolution of any or all of these disputes will encourage greater economic and political cooperation in the Bolivia-Chile-Perú tripoint. The impact on domestic politics in Bolivia is less clear. President Morales suffered a bitter defeat when the International Court of Justice in October 2018 ruled that Chile was under no legal obligation to negotiate sovereign access to the Pacific for Bolivia. A few days before Bolivia presented its six-volume Rejoinder to the Court in May 2019, President Morales stated it was “better to negotiate, to dialogue” with Chile on the Silala issue, suggesting he was less than confident in the strength of Bolivia’s legal case before the Court.[x] With presidential elections scheduled for October 2019, a Court decision on the Silala issue will come too late to impact on Morales’ bid for a fourth term; however, a second defeat before the Court will tarnish his legacy in foreign affairs and encourage a rethink of this prominent element of Bolivian foreign policy.

[iv] United Nations, Convention on the Law of the Non-Navigational Uses of International Watercourses (1997) p. 3. http://legal.un.org/ilc/texts/instruments/english/conventions/8_3_1997.pdf

COHA Guest Scholar Ronald Bruce St John first visited Bolivia in 1968 in the course of researching a Ph.D. dissertation on Peruvian foreign policy. Since that time, he has published widely on Andean issues. His latest book on the region is Bolivia: Geopolitics of a Landlocked State (Routledge 2019).