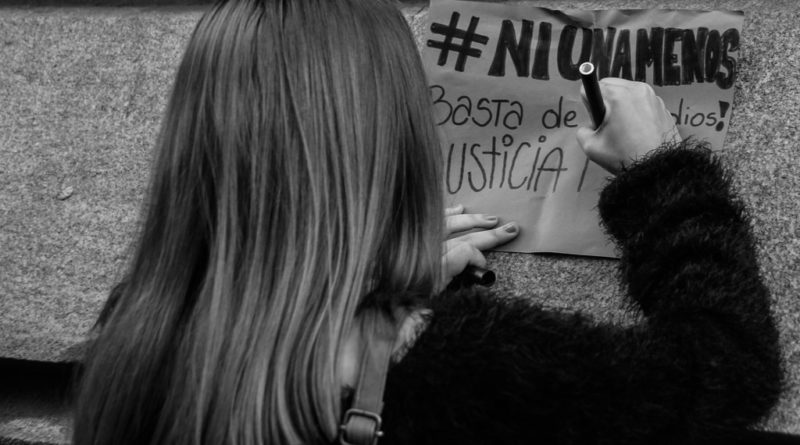 On August 13, Lima became the site of a massive demonstration against the systemic gender-based violence of recent decades. More than 50,000 Peruvians, mainly women, swarmed the streets of the city in an unprecedented march in which they called for justice for the many Peruvian women who are habitual victims of gender violence, or worse, of judicial negligence.[1] With a population of over 30 million, the South American country has been experiencing an alarmingly high rate of gender-based violence. Peru is also one of the countries in the Western Hemisphere joining the cry for the elimination of gender-based violence and is taking part in the regional movement Ni Una Menos (Not One Less).

Violence against women is not uncommon in Peru; for many decades, women have been subject to abuse—even by the one entity supposed to protect them: the state. In the 1990s and early 2000s, Peru witnessed one of the most heinous violations of women’s rights in recent history: under the administration of Alberto Fujimori, thousands of women were forcibly sterilized in an attempt to prevent overpopulation and poverty under a so-called ‘family planning programme’.[2] Sadly, gender-based violence in Peru goes far beyond this single episode of state-sanctioned violations. It represents an epidemic, embedded in the country’s society and culture, which slowly erodes the nation’s integrity. Even worse, the state’s constant judicial ineffectiveness makes it an implicit actor in this ongoing social debacle.

Today, the descendants of the victims from Fujimori’s era are still trying to bring justice to their ancestors after the former president was absolved of the charges for this atrocity.[3] But these Peruvians are not only fighting past violence, but also gender injustice that persists in their country today. Domestic violence is rampant in Peru, and has been so for many years. Despite previous widespread violence against women, Peruvian lawmakers did not recognize femicide—the deliberate killing of a woman for gender reasons— in their penal code until the end of 2011.[4] [5] Regardless of past events and historical flaws, Peru’s judicial system continues to prove ineffective in matters of women’s defense.

According to Peru’s Ministry of Women and Vulnerable Populations, seven out of 10 women in the country are physically abused by their partners. Documents released by the institution report that in the first five months of this year, 29 attempts of femicide took place in Lima alone, and many more occurred in rural areas outside the capital.[6] Most of these incidents have gone unaddressed by law enforcement.

Recently, Peruvian activists have brought attention to cases of gender-based violence in which perpetrators were given short to nonexistent sentences even after tangible evidence of their aggressions was provided to authorities. It was this recent development that triggered the unprecedented August 13 demonstration. The Ni Una Menos movement recognizes that gender violence followed by judicial ineptitude serves to condone a chauvinistic culture that pervades Peruvian society.

Despite disturbing trends, last week’s events represent an important change in the tide of gender violence movements. The demonstration in Lima was of a magnitude never seen before, and certain participants caught the attention of local and international media. Most significantly, newly inaugurated President Pedro Pablo Kuczynski joined the demonstration and declared his administration’s commitment to eliminating gender-based violence: “what we don’t want in Peru is violence against anyone, but especially against women and children.”[7] Kuczynski went on to contend that the first step to stamp out violence is to encourage its public condemnation; therefore, he called upon women’s institutes to join the collective denouncing of femicide and other gender-based violence. Only with such community activism can Peru overcome the harsh reality faced by women and the nation alike.

Other public officials have commented on the importance of the campaign against gender-based violence in terms of its economic importance. Marcela Huaita, Minister of Women and Vulnerable Populations in Peru, stated that gender-based violence detrimentally affects women’s involvement in Peru’s economy. Huaita explained, during the 2016 Asian Pacific Economic Cooperation (APEC) Forum for Women and Economy, that companies lose between $1.9 and $2.5 billion USD yearly due to domestic violence against women. Specifically, female employees miss work after the incident because they must cope with the violent episode or must attend judicial hearings regarding past violence.[8] To combat this, new approaches must be implemented to guarantee women’s reinsertion into the economic world and thereby promote economic growth in the country. Huaita recommends that, in order to achieve this, authorities take charge of processing domestic violence cases and punishing the perpetrators. After this, she assures that the next step to ameliorate the situation is to expand housing and other services for victims. Currently, Peru has a total of 46 refugee houses mainly in urban areas, but is in need of many more.[9]

Although the involvement of high-profile politicians, such as Kuczynski and Huaita, will garner the movement important public attention, there is still much to be done. Tangible results must occur in order to make gender-based violence an anachronism in Peru. First of all, the Peruvian penal code must hold perpetrators of such violence accountable, properly enforcing the law and efficiently delivering justice. Furthermore, the state, now led by Kuczynski, must publicly uphold its determination to eradicate gender-based violence and emphasize a zero-tolerance policy against every form of such violence in Peru. One avenue is through public education, in which curricula should emphasize the importance of women’s equality. Lastly, while women’s groups should continue to actively denounce any kind of violence and aggression, men should also be encouraged to further their involvement in the gender equality facet of social development.

Given that the newly installed presidency is already publicly engaged in tackling gender-based violence, as seen in Kuczynski’s presence in last weekend’s demonstrations, a new reality might be en route for Peru. In this moment, the new administration has the opportunity to differentiate itself from past ones by acting on its commitment to eradicate gender-based violence and urgently work for social development and gender equality in Peru.