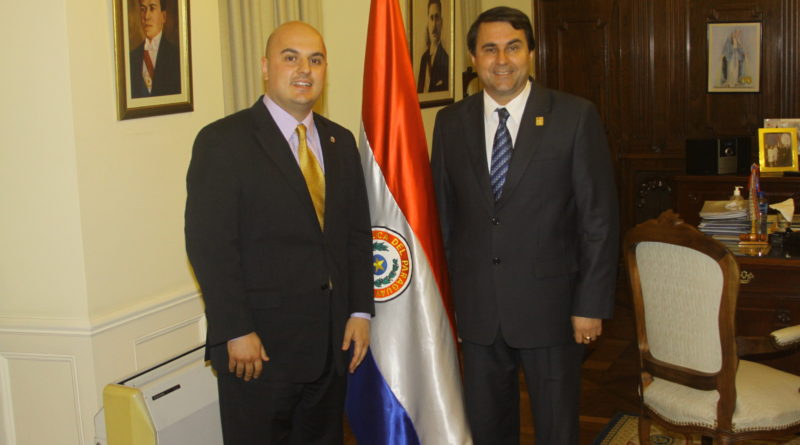 The newly installed President of the Republic of Paraguay, Dr. Federico Franco Gomez, was born in Asunción, on July 23, 1962. In 1986, he graduated as a Medical Doctor and Surgeon from the faculty of Medical Science at the National University of Asunción. Afterwards, he went on to obtain a postdoctoral degree in internal medicine. From 1991 to 1996, Franco Gomez served as a councilman for the municipality of Fernando de la Mora and then as the mayor of the same municipality from 1996 to 2001. 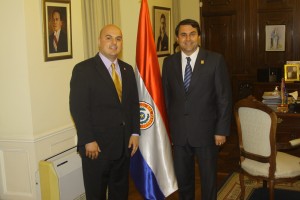 In 2003, Dr. Gomez was elected governor of Paraguay’s central department for a period of five years. In national elections on April 20, 2008, he was democratically elected vice-president of the Republic of Paraguay, by the Patriotic Alliance for Change on behalf of his political party Liberal Radical Auténtico. On June 22, 2012, following the political trial of ex-president Fernando Lugo in the National Congress, Dr. Franco was elected President of the Republic of Paraguay by the national legislature for a term that will expire in August 2013. Since his election in controversial, but apparently constitutional proceedings, Dr. Franco has demonstrated a willingness to pragmatically approach problems while coordinating several projects to improve the Paraguayan economy. However, no Latin American governments or regional organizations have recognized Franco’s administration and the country’s political situation is far from reconciled. COHA is publishing this interview as a contribution to the debate over how the inter-American community should resolve whether the impeachment of President Fernando Lugo was of an extra-constitutional basis.

Peter Tase: What is the political situation, and Paraguay’s contribution in promoting democracy in South America, as well as the nature of its current relation with the United States?

President Franco Gómez:  Firstly, I would like to clarify that we will be participating—God willing—in the 4th of July festivities, celebrating the anniversary of the United States of America. As such, may my first words be of congratulations to the American people. And secondly we are beginning now, Peter, to consolidate the government, affording it greater governability—once this is stable, we will then take care of the issues with our neighbors. Now, our current priorities revolve entirely around the programs and projects initiated by the previous government; they are now being rendered useful and beneficial for the community. The status quo will be continued. We will fulfill all of our international commitments, and in addition, we are focused on accelerating and enhancing said projects that are presently being deliberated in Congress so that the country can exit and shake off its present deficient situation and launch itself with confidence in the better life conditions as well as a greater future for all Paraguayan men and women alike.

P.T.: What level of cooperation exists today between Paraguay and the European Union?

President Franco Gómez: The commercial cooperation between the European Union and Paraguay increased to the figure of 130,000,000 Euros in the current financial cycle (2007-2013).  The European interest in the political and economic evolution of Paraguay remains strong, both for the its bilateral relations, as well as the regional context of MERCOSUR. On April 2012, the VII Reunion of the Paraguay-European Union Joint Committee was held. There, it was highlighted that the current government is in the midst of achieving cohesion amongst the several political and economic sectors, with the goal of seeking a structural transformation that will allow for the institutionalization of democracy with a greater sense of well being for the populace.

There are three basic areas that are being negotiated between the European Union and Paraguay: 1) Technical Assistance: so that our country can be more productive and competitive, especially in the region as one looks into the prospects for penetrating the European Union’s market; 2) Investment and Industrialization Prospects: Paraguay has been offering itself to the EU as an operative base for production services; and 3) Political Cooperation: Paraguay will support the European Union in its relations with other countries in the region, because its [democratic essence] allows the country to assume a leadership role in the area, beginning with serving as a voice for the European Union in the Community of Latin American State and the Caribbean.  Efforts to increase the efficacy of Paraguay’s international cooperation with different [regional] countries and organizations have been made. For the first time, Paraguay officiated as the headquarters for the recent summit of Latin American leaders. During the two-day meeting, October 28 and 29, 2011, representatives from the 22 countries that form the bloc as well as representatives from a number of international organizations, met in Luque and Asunsción to debate the transformation of the State and development in Latin America. Additionally, the World Trade Organization recognized our country for the [commendable] economic and commercial policies that it implemented, which has led to a doubling of its Gross Domestic Product per capita in five years.

P.T.: What do you think regarding the lack of support from MERCOSUR and UNASUR to the new government of the Republic of Paraguay?

President Franco Gómez: MERCOSUR is what worries me. We worry over MERCOSUR because this bloc is an agreement, a market; a market, therefore, has economic and financial connotations. With UNASUR, this is not so much; we know that there are other interests involved of an ideological nature, which is not my priority right now. Today, my priority is MERCOSUR.

P.T.: What are the priorities for the government of President Franco Gomez in his relations between Paraguay and the United States?

President Franco Gómez: Firstly, we must maintain good relations, continue with the programs that Washington has proposed, and see if there are other programs we can [use to] carry through what we have not been able to do, and consolidate our frontal commitment in combating illicit trade, drug trafficking, and of course, the war against what we identify as terrorism against the state [as well as] the guerrilla forces of the Army of the Paraguayan People. These are our present priorities and surely, as time progresses, we are going to project a greater presence. We know that such a presence along with efficient collaboration with the United States authorities, with programs like SENAD, and against the violation of intellectual property must be topics that deserve to be pushed forward and sustained, and in some cases, enhanced.

P.T.: What can you tell American businesspersons who are interested in investing as well as visiting Asuncion?

President Franco Gómez: To come and that we are waiting for them with open arms. And that we will give them an absolute guarantee of judicial, political, and legal safeguards for their investment.

P.T.: Why do you think, Mr. President, that the international press is describing the events of June 22 as an institutional coup?

President Franco Gómez: It is not the international press; it is some media outlets. In Brazil, not all of the media describe it the same way, neither in Argentina. There are some sectors of the press that hold views similar to a majority of Paraguay’s citizenry who followed the process. There is a small group, however, who ultimately rejected the political process in our legislature. We, of course, unequivocally hold that the decision was absolutely constitutional and legal.  This is what we have said to the Secretary General of the Organization of American States, Mr. Jose Miguel Insulza, who endorses our claim.

Some of the content of the preceding interview has been modified to make it easier to read in English, however the nature of the interview’s content, including the ideas expressed by the new Paraguayan leader, remains completely faithful to the original. 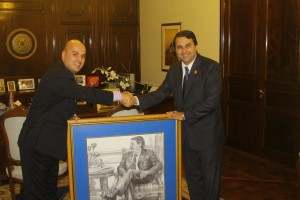