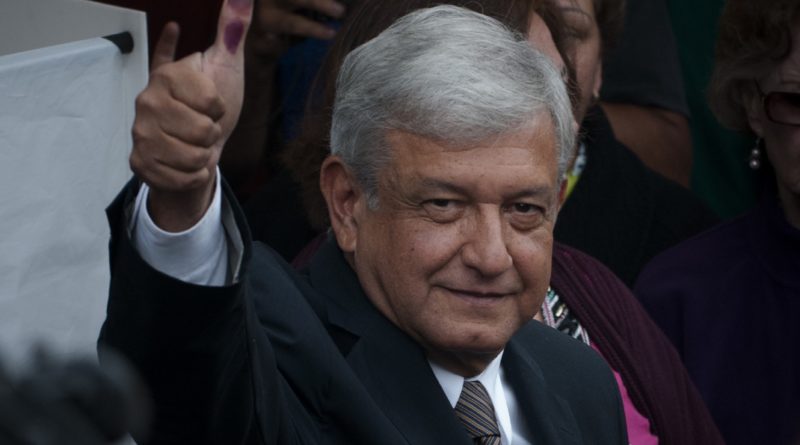 “Lo primero que haré será acabar con la corrupción” (the first thing I will do will be to stop the corruption) swore Andrés Manuel López Obrador (AMLO) in a campaign event in Cosoleacaque, Veracruz this May. [i] AMLO was elected president of Mexico with an overwhelming 52.9 percent of votes in the July 1 national elections. Throughout his campaign, AMLO radiated his hardline-stance against corruption and impunity in Mexico. The election of AMLO was the Mexican people’s referendum to combat the destructive, corrupt practices of countless government officials, and the subsequent violence that has gripped the nation for years. AMLO comes into office with high expectations that will prove difficult to live up to.

Historically, corruption has proved endemic in Mexican governments. The previous presidential administrations were wrought with corruption scandals and allegations—from the PRI’s clientelism to President Peña Nieto’s nepotistic business contracts. [ii] AMLO’s campaign proposed a decisive and absolute crack down on corrupt government practices. At his final campaign event, AMLO stated that “the corrupt regime is coming to its end. We represent modernity forged from below.” [iii] This proposal is exactly what the Mexican people desperately want to hear since long-standing issues of corruption have continually exacerbated problems such as poverty and violence. More than 40 percent of the country’s population lives in poverty and corruption has limited the number of beneficial economic investments in troubled areas. [iv] The working-class people unjustly suffer the negative economic effects of corrupt practices throughout the nation’s political system. However, one cannot be certain whether Obrador was simply playing to the Mexican people’s frustrations to gain popular support or if he truly plans to carry out his ambitious promises.

Nevertheless, voters have made it clear; they have elected AMLO with the stipulation that he adhere to his promises. In an interview with CNBC, 30-year-old citizen Juan Carlos Enriquez said that he supports AMLO but warned him that he better not steal. “Of course, I want him to win. But it has to be made clear that he has to deliver what he promises and not become like the rest,” he said. [v] The Mexican people are fed up with the harmful, corrupt practices of politicians and government officials and are prepared to hold AMLO accountable for the promises he has made.

Mexico’s corruption level ranks higher than those of other countries. As of 2017, Mexico was ranked 135th in a list created by Instituto Mexicano para la Competitividad of 180 countries’ corruption levels, losing millions of pesos to misappropriation of funds, largely due to corrupt practices, every year. [vi] ALMO has promised that during his presidency, no one will steal money belonging to the Mexican people. He has also promised to cut his salary in half to save taxpayer money, setting an example for others to do the same. [vii]

Despite his strong campaign rhetoric on anti-corruption, AMLO has been accused before of not living up to his promises. In an event in Acapulco in 2016, he proposed that officials, known to be corrupt, would not have to face prosecution under his presidency. [viii] While this offer of amnesty may seem kind and forgiving, it poses a concerning culture of impunity for government officials during AMLO’s presidency. Furthermore, this declaration directly contradicts AMLO’s 2018 campaign focus on anti-corruption efforts.

The scourge of corruption is incredibly pervasive and not exclusive to political elites. Corrupt practices at lower levels, such as among police forces and judicial officials, has allowed crime and impunity in Mexico to skyrocket. The time leading up to the July 1 elections was the most violent election cycle in Mexico’s history. By election day, more than 130 political workers and candidates from multiple political parties had been killed. [ix] Partido Revolucionario Institucional (PRI) candidate Fernando Purón, who had spoken out against the cartel Los Zetas, was shot and killed while taking a photo with a supporter.[x]

This trend of campaign violence echos Mexico’s wider problem of cartel and gang-related violence, which has gone widely unchecked due to the systematic issue of corruption. In an interview with CNN en Español, security analyst Alejandro Hope said “[i]n Mexico they kill because they can.”[xi] Between 2015 and 2016 the number of homicide cases in Mexico rose by 25 percent and from 2016 to 2017 the number rose by another 23 percent.[xii] While crime levels decreased in the early years of Peña Nieto’s administration, the rapid increase in violence over the last couple of years has left the Mexican people concerned for their safety and disillusioned with Peña Nieto’s leadership. Mexico’s lower-class has experienced the brunt of the rampant violence and feel that they are being marginalized by state authorities when a family member is murdered. [xiii] According to AMLO’s public security chief-elect Alfonso Durazo, the president-elect plans to combat this problem by raising police salaries, eradicating corruption, considering the decriminalization of marijuana, offering amnesty for low-level criminals, and placing a greater emphasis on crime prevention.[xiv] This overhaul of the current Mexican legal and judicial system is incredibly ambitious — but ultimately necessary. If AMLO can, indeed, deliver such a change, these systematically intertwined issues of corruption and violence will be diminished, benefitting the entire nation. Unfortunately, it seems the feasibility of this plan in such a short, six-year administration is questionable at best.

It remains unclear whether AMLO can live up to the high standards he set on the campaign trail. His campaign promises spell out the dreams of many Mexicans; the overwhelming majority vote proves that the voters are fed up with corruption and violence in their country. To his supporters, AMLO represents the end of an age of injustice and fear — freedom from the corruption and violence that plagues the country. At the end of his sexenio (six-year term), will AMLO be remembered as a knight in shining armor for Mexico’s people or just another establishment politician? As it stands, his proposals seem lofty, idealistic and ultimately, unrealistic. However, until then, it is up to the future president to deliver on his campaign promises as he takes office this December.

[ii]Woody, Christopher. “Mexico’s President Is Facing the Most Damning Charge Yet – and His Reputation Is Crumbling.” Business Insider. August 01, 2015. Accessed July 26, 2018. http://www.businessinsider.com/mexicos-president-pena-nieto-and-contracts-2015-8.