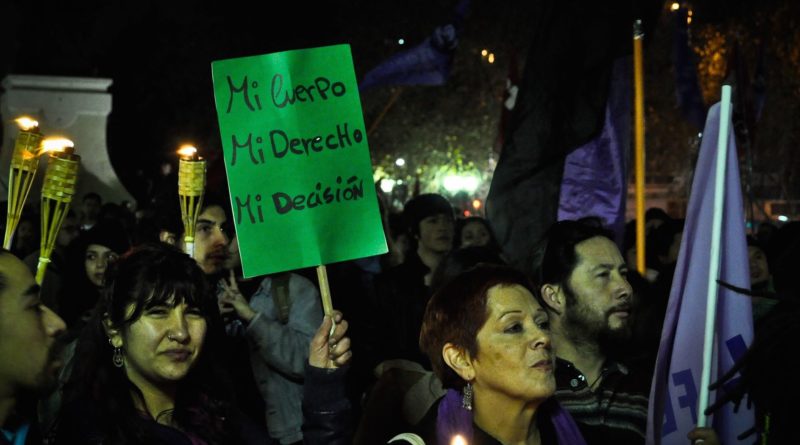 By: Kate Sopcich, Research Associate at the Council on Hemispheric Affairs

“The rich women pay, the poor women bleed,” reads a flyer posted on the walls in the streets of capital city Santiago, Chile. The underlying message of this socio-politically charged statement is the driving sentiment behind the latest developments in the highly controversial debate surrounding abortion in the country. Specifically, it means that due to the illegality of abortion in Chile, poor women are forced to carry out clandestine and unsafe abortions, risking hemorrhage, death, and legal punishment. Conversely, wealthy women are able to attain the procedure without subjecting themselves to risk or incarceration warranted by their elevated socio-economic status. This same conviction that has led to the forced resignation of former Minister of Health, Helia Molina. On December 30, 2014, in an interview with Chilean publication La Segunda, Molina referenced this socio-economic double standard that colors the discourse on abortion in the country. A doctor herself, Molina disclosed that many conservative families have enabled their daughters to seek and attain safe abortions. Diving into the dangerous territory of Chile’s covert, grave class disparity, Molina boldly stated: “The people with more money do not require laws, because they have the resources.”1 In her comment, Molina specifically employed the word cuica—a colloquial term used to refer to upper-class women which generally implies disdain towards the wealthy. In this case, the privilege exploited by cuica women is access to a secret and safe abortion.

Shortly after the revealing interview, which was conducted in light of the proposed legislation to decriminalize therapeutic abortion, Molina made a public statement clarifying that her words represent her personal opinions and not those of the government. Nevertheless, Molina was forced to step down from the Bachelet’s Cabinet to protect the administration as Congress pushes forward with the current therapeutic abortion bill.2

In mid-May 2014, a 17-year old was found unconscious and taken to a hospital in Santiago, tragically hemorrhaging after a self-induced abortion, likely from pills purchased on the black market. The doctor notified the police who then searched her home and found bloodied clothes—evidence that could potentially land the young girl in jail for up to three years.3 It is not uncommon for doctors to report women for abortion in Chile. Amid the country’s archaic reproductive policy, there is a clause that grants amnesty to the doctor who performed the abortion if they report the act. In fact, healthcare professionals are responsible for filing roughly 75-80 percent of the criminal charges filed against women for abortion.4 Although the doctor did not perform the abortion in this case, he may have reported the girl out of fear that he could potentially fall suspect. For this reason, many women choose not to seek medical help in the event of a self-performed abortion gone wrong, exponentially increasing risk surrounding clandestine abortions.

It is difficult to ascertain exact abortion rates due to the illegality and societal taboo of the procedure. Chilean NGO La Morada estimates that 35 percent of pregnancies in the country end in abortion, and that 40 percent of abortions are performed on women younger than 18 years old.5 Additionally, it estimates that a quarter of clandestine abortions are poorly executed, forcing women into risky visits to the hospital, where they could then face criminal charges.6

In 2013, the appalling case of Belén became widely publicized, sparking a national and international debate surrounding abortion legislation in Chile. Belén is the pseudonym given to the 11-year old girl from the south of Chile who became pregnant after enduring two years of rape by her mother’s boyfriend. When her grandmother called the police, the case quickly drew international attention. Under public scrutiny, former President Sebastián Piñera offered words of praise to Belén following a public statement of her commitment to the pregnancy, expressing that her “decision” displayed “depth and maturity.”7 Although just two of many, these heart wrenching cases suggest the need for legislative action.

As a socialist and feminist, Chilean President Michelle Bachelet faces a unique set of challenges when it comes to abortion legislation, in this politically and socially conservative country. Bachelet worked as a physician in public clinics prior to her political career, shaping her perception of access to health care in Chile, and later inspiring her executive action to distribute the morning-after pill at national hospitals, free of charge.8 Additionally, as former head of the United Nations’ Entity for Gender Equality and the Empowerment of Women, and Minister of Health under former President Ricardo Lagos, Bachelet proves sufficiently qualified to address reproductive and sexual rights as her nation’s leader. In her previous position as Minister of Health, Bachelet publically stated her support of therapeutic abortion, stressing its importance as a viable option in the case of rape.9

On May 21, 2014 in the presidential address for her second term, Bachelet announced her intention of decriminalizing abortion. Much to the chagrin of conservatives, the president clearly stated that: “Chile must face this reality in a mature, informed, and proactive discussion, by debating a bill in Congress to decriminalize the voluntary interruption of pregnancy, in cases of risk to the life of the mother, rape, and unviable fetus.”10

According to the proposed legislation, if an abortion is sought in case of rape, it must be within the first 12 weeks of gestation. All circumstances require a clinical evaluation and the opinion of at least two medical professionals.11 Therapeutic abortion was legal in Chile from 1931 to 1989, but criminalized by General Augusto Pinochet as his last legislative action. While far from progressive by Western standards, these amendments would be a step forward for reproductive and sexual rights in Chile, and would symbolize the renunciation of policies from Pinochet’s regressive dictatorship.

The impending congressional decision is responsible for the recent uproar in the contentious debate. After Helia Molina exposed the socio-economic double standard that typically lies deep below the surface of public dialogue, conservative parties quickly rose to counteract an apparently growing pro-choice attitude in the country. Aiming to instigate unrest in the dialogue, the president of the Independent Democratic Union Party (Unión Demócrata Independiente, UDI) Ernesto Silva, called upon the Christian Democratic Party (Democracia Cristiana, DC) to publically declare its position on therapeutic abortion. The DC is the leading member of the Concertación, a center-Left political coalition that, with the exception of conservative Sebastián Piñera’s term from 2010 to 2014, has maintained presidential power since the country’s transition to democracy beginning in 1990. The DC represents a high percentage of the country’s population and holds 21 out of 120 seats in the Chamber of Deputies.12 The only party that holds more seats in the Chamber is the UDI, with 29 seats. The DC plays a critical role in presenting the debate and in the hope for legislative reform. Although the party generally upholds Catholic morals, it is more rational and progressive in its ideology in comparison to both the Catholic Church and the UDI. For example, DC President Ignacio Walker was the driving force behind the ratification of the 2004 law legalizing divorce. Although as a result, Walker faced widespread criticism and disapproval for his active role in challenging Catholic morals.13 Reflective of the overarching societal discrepancy, DC party members continue to diverge on the topic of therapeutic abortion, thus diluting any potential efficacy of their legislative power in the nearing congressional vote.

UN consultant Bonnie Shepard depicts the double standard referred to by Helia Molina as, “the art of espousing traditional and repressive sociocultural norms publicly, while ignoring—or even participating in—the widespread flouting of these norms in private.”14 She clarifies that it is “not just an agglomeration of individuals privately sinning,” but also “a political and cultural system.”15 With regard to abortion, the paradigm culminates into a highly oppressive structure that works to discriminate against low-income Chilean women, whose voices commonly go unheard in the political arena. More progressive parties understand abortion to be inevitable and encourage a legal framework to provide access to safe procedures, but Chilean society is far from agreeing on the importance of widespread access to safe and legal abortion.

On January 12, 2015, a commission—alleged to be fully representative—met to enrich the current dialogue on the approaching legislation in attempt to denote the female perspective. During the session, Congresswoman María José Hoffmann spoke on behalf of her party, declaring: “the women of the UDI demand that President Bachelet stop looking for excuses to legalize abortion.”16 The Right perceives the proposed legislation to be a free and indiscriminate path toward the legalization of abortion. This understanding is blatantly misguided given that the present discourse routinely delineates the reform to merely be therapeutic abortion. The majority of Chileans remain willing to accept the position maintained by the Right, for fear of renouncing their values of morality, life, and motherhood. The resulting silence effectively inhibits potential progression of the dialogue.

Tensions are undeniably building in Chile. A double-discourse, the secret, hushed support from the majority undermined by public denunciation, has served to prevent forward motion of previously proposed legislation. However, 80 percent of Chilean women are in favor of decriminalizing abortion in the cases of rape, unviable fetus, and risk of life to the mother.17 This high percentage does not seem to merit political action; it is no surprise that over 60 percent of Chilean women have lost faith in their political party’s ability to represent their interests.18

On January 23, 2015, President Bachelet appointed public health specialist, Dr. Carmen Castillo Taucher as Chile’s new Minister of Health. Castillo is a member of the Revolutionary Left Movement (Movimiento de Izquierda Revolucionaria, MIR) and has a political history linked to the Allende Administration. Like Bachelet, she spent a significant portion of her life in political exile during the Pinochet dictatorship. In her speech at the designation of Castillo, Bachelet stated that as a country, “[they] must focus all of their efforts towards […] establishing health as a right and [pursuing] [Chile’s] ambitious government plan.”19 The president’s words clearly allude to the impending congressional decision on therapeutic abortion legislation. It appears that President Bachelet is striving to manipulate the current situation towards the decriminalization of therapeutic abortion in appointing a progressive Minister of Health. In her speech, Bachelet expressed confidence in the “talent and experience” of Castillo, insinuating that the newly appointed minister is more than capable of tackling the matter at hand.20

Considering President Bachelet’s position in favor of therapeutic abortion, increasing public support, Molina’s recent exposure of the socio-economic double standard at play, and newly appointed Minister of Health, Dr. Carmen Castillo, there is hope for progress. When negotiating the proposed therapeutic abortion legislation in the coming weeks, it is critical that the country’s Congress exercises a degree of pragmatism in its decision. As an established example of an immensely esteemed country in terms of economic success and development, Chile cannot afford to appear incompetent in the eyes of the rest of the world, particularly in comparison to its Latin American neighbors.

By: Kate Sopcich, Research Associate at the Council on Hemispheric Affairs

9 President Bachelet stated “[Belén is] a girl with her entire life ahead of her and she requires protection, that being said, the option of abortion in this case, for rape, seems to be the right solution” . Citation in Lopez, Elwyn. “Raped 11-year-old Stirs an Abortion Debate in Chile.” CNN.com. Cable News Network, Published July 11, 2013.

14 Shepard, Bonnie. “The “Double Discourse on Sexual and Reproductive Rights in Latin America: The Chasm between Public Policy and Private Actions.” Health and Human Rights 4.2 (2000): 110-43. JSTOR.