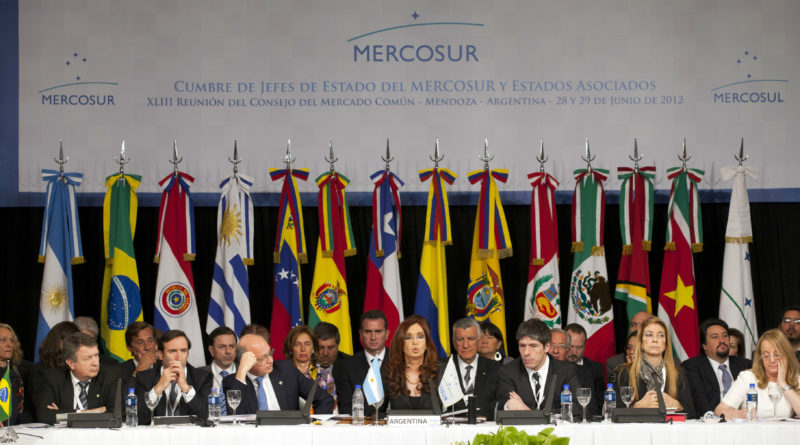 On June 11 and 12, a summit between the European Union (EU) and the Community of Latin American and Caribbean States (CELAC) was held in Brussels, Belgium. During the summit, the EU and Mercado Común del Sur (Mercosur), a sub-regional bloc comprised of Argentina, Brazil, Paraguay, Uruguay and Venezuela with the mission to promote and facilitate free trade, engaged in further negotiations of a EU-Mercosur free trade agreement. Brazilian President Dilma Rousseff said about the agreement, “Brazil and Mercosur are ready to present their trade proposal to the European Union in the coming days or weeks.”[1] Mercosur is governed by the Common Market Council, which consists of the ministers of foreign affairs and economics of all five-member states, with its presidency rotating every six months in alphabetical order of the states. It is the tenth attempt since formally renewing negotiation talks on May 17, 2010 in Madrid to form and agree upon a biregional free trade agreement—the penultimate attempt took place from October 22 to 26, 2012.

Negotiators hope to establish an extensive biregional trade agreement between the EU and Mercosur, covering not only the regulation of industrial and agricultural trade but also inter-governmental procedures and services such as rights to intellectual property and customs facilitation. Overall, a trade agreement fashioned between the EU and Mercosur would help to reduce barriers of trade like tariffs, allowing for a more fluid and efficient exchange of goods and services between the regions. A reduction of tariffs remains the primary goal. On December 15, 1995, the EU and Mercosur signed the Inter-Regional Framework Cooperation Agreement, which later came to full fruition in 1999. The agreement serves mainly to strengthen pre-existing ties and relations with an emphasis on human rights and democratic principles. According to a study conducted in 2013 by the European Commission, the EU is Mercosur’s primary trading partner, accounting for 20 percent of its trade in 2013.[2] Consequently, Mercosur is the sixth largest provider of exports to the EU; in 2013, the EU was the destination for 43 percent of Mercosur’s agricultural exports, 28 percent of raw materials, 46 percent of machinery and transport equipment, and 22 percent of chemicals.[3] Furthermore, the EU is the largest foreign investor in the region and has recently provided extensive support to Mercosur through the 2007-2013 Regional Program, which provides $78.6 USD million toward institutional strengthening, supporting Mercosur’s preparation efforts for a free trade agreement, and fostering greater civil participation within the sub-regional bloc.[4] The EU and Mercosur were projected to exchange market access offers prior to 2014. However, the time taken by Mercosur member states to produce an offers list was substantial, with them finally detailing their joint-offers in July 2014.[5]

Europe has faced increasing pressure to reach a finalized trade agreement, viewing the potential Mercosur partnership as a viable countermeasure to compete with Chinese influence in Latin America. With little liquidity for investment due to Europe’s debt crisis, the EU believes that a bioregional free trade agreement with Mercosur will effectively contend with China’s $250 billion USD investment proposal in Latin America. The EU also views a free trade agreement with Mercosur as an aid in revitalizing the European economy by constructing an effective balance of trade, which in turn allows for a reduction of trade tariffs. The EU is increasingly frustrated by its inability to sign a finalized agreement. Three out of the four negotiating member state—Argentina, Brazil, and Uruguay—no longer benefit from the Generalized Scheme of Preferences, a preferential tariff system provided by the EU to developing countries that allows for EU market access, and thus view the agreement with more urgency.[6] The costs of not signing an agreement are heightened. Mercosur is increasingly under pressure to sign a free trade agreement with the EU, as the Pacific Alliance—a regional bloc between Colombia, Chile, Peru, and Mexico—further moves towards a more open market model. The European Parliament believes that the Pacific Alliance is “the most promising and dynamic regional group in Latin America.”[7] Nevertheless, Mercosur is exceedingly cautious to ensure a viable degree of protection for the region’s scarce resources. An increase in EU imports has the potential to completely undercut the region’s native products. A free trade agreement with the EU would only increase the degree of European influence within the trading bloc, furthering the exploitation of the region’s resources and people under European influence. With history in mind, Mercosur remains apprehensive of the EU’s exploitative tendencies.

A roadblock in negotiations of a bioregional trade agreement between the EU and Mercosur is the “speed” of such talks. Since all member states of Mercosur must willingly come to an agreement, the progression of the negotiations has been hindered by states in opposition to an agreement with the EU, such as Bolivia and Argentina. Believing that the agreement will only benefit multinational businesses and the wealthy, Bolivian President Evo Morales says, “Who wins with the competitive polices? The huge multinational corporations and not the peoples or the small farmers.”[8] Similarly, Argentina is apprehensive of a trade agreement with the EU, as the nation would lose much of its dominance within the Brazilian market due to cheaper EU products. Many speculate that if the accord is not signed before Argentina’s presidential elections in October, the probability of reaching a finalized agreement will decrease greatly.[9] Thus, the approving countries, specifically Brazil, are calling for the negotiation talks to move at “different speeds,” allowing member states to individually negotiate with the EU. A two speed process would help the more willing countries such as Brazil, Paraguay, and Urguary to further advance in negotiating with the EU, while allowing Argentina and Venezuela to pursue an agreement at their own pace. Brazil is the most eager member to sign a free trade agreement with the EU, as its economy accounts for two-thirds of the total Mercosur GDP. Additionally, a signed agreement with the EU would allow Brazil to limit its dependency on China. The EU’s Managing Director for the Americas, Cristian Leffler, countered Brazil’s call for a reform of more flexible negotiating rights, saying that the EU is determined to reach a free trade agreement with the entire Mercosur trading bloc, not individual countries.[10] Following the summit in Brussels, several EU countries stated that they are currently unwilling to further exchange agreement proposals due to fear of competition, as Europe continues to remain stagnant in growth and job creation.[11] As a result, the EU and Mercosur agreed to exchange proposals in the third quarter of the fiscal year, planning to hopefully sign an agreement by 2016.

Port access for landlocked countries and energy remains on the negotiation agenda. It is especially crucial that landlocked countries, specifically Paraguay, have access to various seaports, mainly accessed by crossing the Parana River in Argentina.[12] Thus, the stipulations of trade between Argentina and Paraguay in regards to port access have to be negotiated. Furthermore, Paraguay maintains a surplus of electricity from its two hydroelectric dams, shared with Brazil and Argentina. Uruguay desires accesses to the Paraguayan electrical grid, but, in order to do so, power lines must be strung throughout Argentine territory. As has been displayed, friction continues to internally plague the member states of Mercosur, further inhibiting the bloc to act cohesively in negotiating with the EU.

The negotiations have been slow. The perception that not signing an agreement would lead to negligible losses has hindered any forward momentum of negotiations in the past, with no immediate agreement on either party’s previous agenda. The 2001 collapse of the Argentine economy presented an unappealing environment for the EU to avidly pursue a free trade agreement with Mercosur. The 2004 and 2007 augmentations, increasing the number of member states, prompted the EU to concentrate on its domestic pursuits, as the majority of new member states touted substantial economic and socio-political issues, a lingering result of the dissolution of the Soviet Union.[13] Furthermore, the EU was mainly concerned with securing the U.S. Transatlantic Trade and Investment Partnership, putting aside a free trade agreement with Mercosur.

During negotiations, friction between both parties arose due to divergent ideas on agricultural trade. The dispute stemmed from the clash between Mercosur’s desire for agricultural liberalization and the EU’s desire for agricultural protectionism.[14] Additionally, the EU has rejected various offers due to insufficient amounts of offered goods. The reason for this is that each member state compiled a list of potential goods individually, not as a collective bloc. The issue is that the member states of Mercosur have not engaged in negotiations as a cohesive bloc, presenting a fractured union and thus unable to reach a mutual consensus among the bloc. So far, the stipulations of agricultural trade continue to hinder the negotiation process.

The cost of not reaching a trade accord has heightened over the past decade. Both parties are increasingly anxious to reach and finalize a bioregional free trade agreement. An agreement between the EU and Mercosur would help to not only stabilize, but also to promote economic growth within both trading blocs. However, such stability and growth holds the potential to benefit the wealthy and the multinational corporations, arising at the expenses of Mercosur’s resources. Failure to reach an agreement poses the concern that a future agreement may not be feasible; however, both blocs must remain patient and diligent in constructing a potential agreement to ensure that the accord is advantageous for all individuals in both regions.