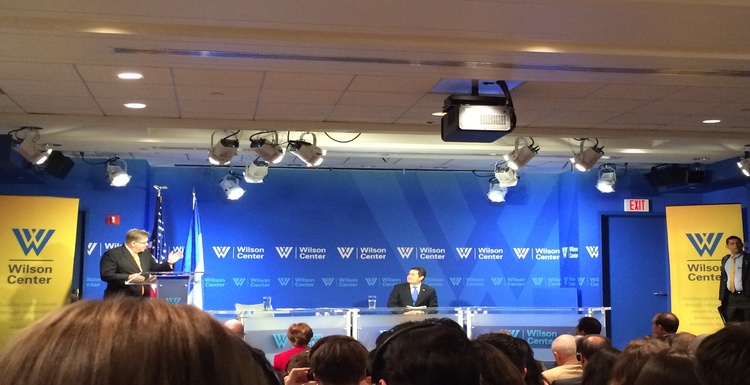 On April 22, President Juan Orlando Hernández of Honduras delivered a speech at the Wilson Center in Washington, D.C. regarding his latest efforts to implement the major goals of the Alliance for Prosperity. The president was eager to present his plans for expanding the productive sector, developing opportunities for human capital, and to show that Honduras has turned over a new leaf of transparency in order to promote an open government with a vibrant civil society. While important, the focus on domestic issues left out any in-depth discussion concerning the War on Drugs as well as the country’s poor human rights record.

The Alliance for Prosperity in the Northern Triangle, an initiative joining Honduras, Guatemala, and El Salvador, hopes to solve socioeconomic problems that plague the region. The four main objectives of this plan are to stimulate the countries’ productive sectors to create more economic opportunities, invest in the development of their nations’ human capital, increase security and access to justice, and to restore credibility through the fortification of state institutions. While the Honduran economy has been growing at a stable rate of 3.1 percent since 2013, President Orlando Hernández announced that he wants to do more by investing in social programs that will help the well being of the 64.5 percent of Hondurans living below the poverty line, particularly those who live in rural regions that the president called the “forgotten Honduras.”[i]

One such program, Vida Mejor, focuses its efforts on providing rural citizens with basic needs such as clean water and adequate shelter. Vida Mejor is making progress and is greatly supported within the country’s private sector. With the help of these projects, the president hopes to further revitalize the economy and to demonstrate that his administration is committed to addressing the needs of the rural population of Honduras that has been neglected by past administrations.

A further prominent interest is reforming the energy sector to increase the production of sustainable energy. Some of President Orlando Hernández’s plans include creating solar parks and harnessing eolian energy. The president also announced Honduras’ involvement in a 370 mile, US $1.2 billion dollar natural gas pipeline proposed by Guatemala in January 2014.[ii] The pipeline will be built between Mexico, Guatemala, and Honduras and will strengthen ties among the three countries, and—the point that the president most stressed—will result in a 50 percent decrease in the price of energy. Although the promise of ease of accessibility to this resource is appealing, the environmental hazards associated with such a project seem to be overlooked by the president.

Regarding the creation of human capital, President Orlando Hernández stated his intention to establish a social protection net for the extremely impoverished and to promote educational and professional development with the use of new technologies. The president also promised reforms in areas of telecommunications, ports, property registries, and the migration regulations.

Emigration has proven to be one of the biggest and most complex problems in Central America. President Orlando Hernández sees in the implementation of the Alliance for Prosperity a way to counter the lack of opportunity, political persecution, and the more deep-rooted issue of cartel-related violence within the region. Turning to the words of Albert Einstein, the Honduran head of state held that his nation must adapt, or it will never achieve a better life for its citizens. The president proudly declared that child migration has been reduced by 65 percent since last October’s surge of around 15,000 Honduran children across the US border. However no other confirming source could be found to support his claims.

Following the speech there was a short question and answer session in which President Orlando Hernández continued to emphasize domestic issues. After multiple questions regarding the legalization of drugs and the problem of domestic consumption of illegal drugs, Orlando Hernández was asked what Honduras can do, as an individual actor, to combat the chain of crime that shadows transnational narcotic shipments. The president repeated the three-region rhetoric that “South America produces, Central America ships, and the US consumes.” Although the president asserted that all parties are responsible for the crisis, he seemed to disproportionately place blame on Colombia and the US, which are, as he put it, the producers and the consumers of the illegal narcotics.

Since Mexican drug cartels have expanded into the region and enlisted local street gangs who have begun to export South American cocaine through Caribbean ports to the United States, the rate of murders in Honduras has risen to 90.4 per 100,000 inhabitants. Criticism of the United States remained veiled. In previous interviews the president has been vocal about his dissatisfaction with the US, as he has blamed US drug policy for inciting violence in Central America and causing a massive surge of migration. The Honduran president categorically refused all possibilities of drug legalization, and simply reiterated Obama’s statement that informed discussions must be held to further determine any potential decriminalization.

A UN analyst confronted President Orlando Hernández on his assertion that Honduras is responsible solely for the shipment of narcotics, and has little problem with addiction; the analyst and his team have reported on rampant addiction and a lack of rehabilitation facilities in Honduras. When presented with these findings, the president simply replied with, “Yes, we have a problem,” and quickly asked for the next question from the audience.

President Orlando Hernández made only brief remarks about militarization within Honduras, stating that the military has taken a prime role in the fight against narco-trafficking. This course of action is not the president’s first choice in dealing with the problem, as the corruption of military has undermined the credibility of the government’s attempts to curtail drug violence. He ended his mention of heightened militarization by expressing a wish for the military to eventually return to its former role and leave the municipal police with the task of pacifying drug-related violence.

The president did go into detail about the changes that he hopes to make in order to improve upon his country’s poor human rights record. Human rights have been a continuous problem in Honduras, as the line between military and civilian sectors converge, and abuses of power continue to escalate. Since the ousting of President Manuel Zelaya in the 2009 military coup, leading activists have increasingly been targeted for harassment, arbitrary arrest, and assassination. A horrifying recent example is the assassination of four student leaders in March 2015, found dead in the country’s capital after having organized several demonstrations against the Honduran education minister.[iii] In addition, more journalists have now been murdered in Honduras than in any other country. According to Honduras’s National Human Rights Commission (CONADEH) 36 journalists were killed between 2003 and mid-2013, and 29 were killed from 2010-2014, during former Honduran President Porfirio Lobo Sosa’s presidency.[iv] President Hernández stated that “security and human rights go hand in hand” and that an international human rights monitoring organization is awaiting installment in Tegucigalpa with the support of the US. He added that laws to protect activists and free press would be promoted in order to stimulate dialogue.

However, after being asked about the rampant violence against women and young girls the president failed to give a straight answer about where the funds for the prevention of abuse and protection will come from. Instead he simply stated, “Civil society will be promoted to realize the programs of the Alliance.” The efficacy of said programs, however, remains in question.

Many of the initiatives under the Alliance’s umbrella seem geared towards softening the ground for foreign investors rather than providing direct poverty relief. The neo-liberal model followed by these initiatives has historically produced questionable results in terms of helping the lower classes, and the wealth that such foreign investment creates rarely trickles down to those who need it most. As with many problems, however, President Orlando Hernández elected to leave these issues unaddressed.

President Orlando Hernández’s speech promoted his plan for domestic development. While detailing the new initiatives for the prosperity of his people, the president seemed to lack equal detail when addressing questions of what Honduras can do to tackle the global illegal drug issues in which it is entangled. Only when his administration takes on the problems that Honduras is facing on a transnational level will President Orlando Hernández be able to meet the standards necessary to join the Alliance for Prosperity, and make use of the admittedly questionable advantages it offers.