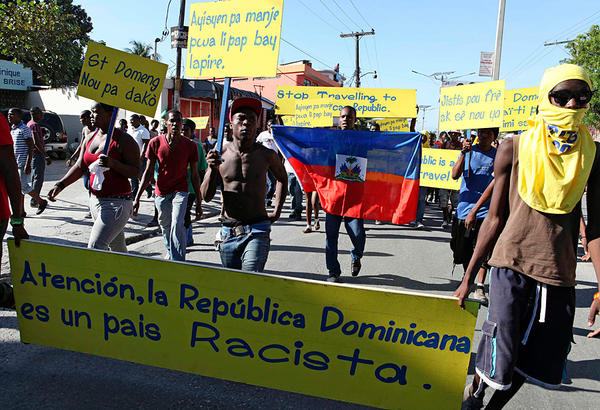 Dominican-Haitian inter-racial relations have experienced a measure of progress as a result of a new Dominican regulation, the Naturalization Plan Act. Signed by President Danilo Medina (2012-present) the law passed the lower house and won unanimous support in the upper branch of the legislature on 21 May 2014, awarding citizenship to some 13,000 Dominican descendants of Haitian migrant workers [1]. Medina and the Congress had been operating under pressure from the United Nations, Amnesty International, and the Caribbean Community and Common Market (CARICOM). In effect, Medina has restored essential rights that had been revoked by a Constitutional Court ruling on 23 September 2013 [2]. However this month’s counter-measure restores citizenship to only a portion of the population that had been temporarily rendered stateless by the previous adjudication. The Dominican Republic and Haitian embassies have been contacted to elaborate on the effects the law would have upon disaffected citizens, and who qualified as benefactors, but both have declined to comment.

Racial tensions in Hispaniola date back to the colonial period as exploitation of slaves sowed the seeds of long-lasting racial hostility [3]. The plantation system established by the French and Spanish in the seventeen century ensured, in the words of scholar Helen Chapin Metz, that “racial animosities… affected attitudes” [4] for generations to come, causing “a hardening of class and social divisions based on skin color.” [5] These legacies continue to permeate both cultures, with Dominican resentment for migrant workers of Haitian background being mirrored by Haitian envy of their more prosperous neighbor [6].

The Constitutional Court’s decision in September inflamed anew these tensions, preventing those of Haitian descent from receiving basic privileges ranging from marital rights and the right to education beyond the eighth grade to the right to establish a bank account [7]. Still, critics of the presidential decree assert that Medina’s motives are insincere, and that he is only trying to appease international allies. Although Molina’s legislation is attempting to jettison some of the worst human rights violations, it falls far short of meriting a moniker such as “Defender of Rights”.

One of the most frequent exporters to the fifteen CARICOM nations is the United States. The U.S. is a nation that continues to seek improved immigration regulation, particularly when it deals with those in an undocumented circumstance, and certain attempts might have offered guidelines for reform in Hispaniola. While many alternatives have been unsuccessfully presented, one worth reviewing was put forth seven years ago by former President George W. Bush and titled the Comprehensive Immigration Reform Act of 2007. His proposal, which was defeated via cloture, proposed that millions of undocumented immigrants be issued an alternative form of identification which would later render them eligible to apply to become permanent residents. There were limitations on who would qualify for the innovative identification card, namely restricting eligible relatives to the spouse and children of new citizens. While there were many components to Mr. Bush’s law which were unsavory, this particular approach to naturalization, with a path that would lead towards citizenship, was favorable.

In an era when countless nations wrestle to achieve collective support for immigration reform, the Dominican Republic had the unique opportunity to reverse the controversial position taken by its highest court in September of 2013, as well as facilitate amelioration of the circumstance by offering amnesty to the stateless citizens excluded from the recent edict. The DR had the option of embracing a protocol similar to President Bush’s proposal, yet instead, they merely restored the rights of approximately 24,000 whom were affected by the initial verdict, of which reportedly 13,000 are of Haitian descent [8]. This appears to perpetuate the continued racial strain between the two countries as well as represents a squandered opportunity to become the exemplar for progressively addressing immigration reform.

The steady dissolution of prejudice within the Dominican Republic has quickened its pace in recent decades. This development breeds hope that the benevolent ideology of Nelson Mandela might soon be embraced, when he said “[n]o one is born hating another person because of the color of his skin, or his background, [p]eople must learn to hate, and if they can learn to hate, they can be taught to love, for love comes more naturally to the human heart than its opposite” [9]. Imperfect though this legislation is, the Naturalization Plan proffers hope that future progress is possible among previously strained nations. However, let us neither presume that the issue is resolved, nor that the regulation is wholly inclusive.