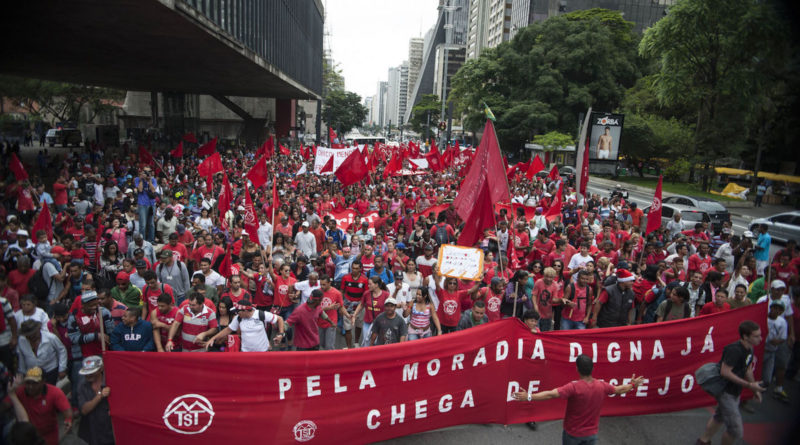 In the wake of former president Luiz Inácio “Lula” da Silva’s historic decision to surrender to his 12 year prison sentence, a viable candidate for the Brazilian left has yet to replace him. As the clock ticks toward October, several candidates are in play, but a strategy for the left remains elusive. Should they hope to succeed in such a difficult moment, the elevation of Brazil’s long-running social movements is an important course of action.

One potential contender, Guilherme Boulos, leader of the Movimento dos Trabalhadores Sem Teto (Homeless Workers’ Movement, MTST) has announced his candidacy for the Brazilian presidency with the Partido Socialismo e Liberdade (Socialism and Liberty Party, PSOL). Boulos will hardly be as popular a candidate as Lula, whose legacy has made him the frontrunner despite his current imprisonment, but Boulos and the MTST perhaps represent the type of politics Brazil needs most.

In the wake of the Lava Jato scandal, a deep rift has opened between many Brazilians and their corrupt political elite, who count among both the center left Partido dos Trabalhadores (Workers’ Party, PT) and the right-wing Partido da Social Democracia Brasileira (Brazilian Social Democracy Party, PSDB).

With such discouraging options, where are Brazilians to turn? Already, self-styled outsiders such as a São Paulo mayor João Doria (PSDB) and the proto-fascist Jair Bolsonaro are rushing to the gates of leadership. If Lula is unable to appeal his sentence, or the election is otherwise tampered with by the coup government, the left will need to pursue change beyond the PT, which still intends to register Lula as its candidate. What this will require is a reckoning with the democratic crisis in Brazil and with those who seek to take advantage of just that.

Across Western democracies, a moment of populism has marked the last few years. Brazil’s post-coup moment is undeniably unique, but an examination of populism proves useful in combating outsider figures such as Doria and Bolsonaro.

The current political climate in Brazil is ripe for populism. Political scientist Margaret Canovan argues that populist moments arise due to a schism embedded in liberal democracy: on the one hand, liberal values which insist on stable rule of law via separate institutions and individual freedoms, and on the other, popular sovereignty which puts the vox populi above all else. In other words, populism emerges when institutions fail their citizens, allowing a leader to seize the demos with charismatic force.

The coup in Brazil has all but destroyed faith in institutions meant to guarantee rule of law, as the legislature and judiciary have served only to bring Michel Temer, an unelected president, to power and to disqualify Lula, his most popular opposition. When liberal institutions fail their populace so thoroughly, the conditions are set for a populism which seeks to restore popular sovereignty in the name of the people.

Identifying a populist tends to be tricky; while they can be ideologues of any stripe, from socialist to fascist, the only true signifier is a mode of argument which pits “the people” against the powerful. When someone like Bolsonaro touts his corruption-free record to distance himself from the rest of the ill-favored politicians of the moment, his argument is based in the populist mode; he seeks to ally himself with the people against their corrupted leaders.

According to Mark Langevin, director of the Brazil Initiative at the George Washington University, “The rise of Bolsonaro and his rant-and-rave populism can only be understood by measuring the political distance that now separates most Brazilians from their representatives in Brasilia.”

This political distance is the lesson hidden in the noise of feverish rallies and it is a lesson the left ought not forget. Although he is a hero to the Brazilian poor, Lula’s conviction on the charge of taking bribes, justified or not, plays easily into the hands of men like Bolsonaro and Doria.

The potential for a populist moment is clear, and if there is any lesson to be learned from the wave of right-wing extremism which has recently spread across Europe, the Brazilian left must take advantage of the current moment to prevent it from falling into more dangerous hands.

A space for social movements

So who should lead the way for the Brazilian left? Far beyond the election, Brazilian democracy will need repair which liberal institutions and political parties do not seem to be offering, leaving a gap that only social movements may be able to fill

According to a July poll from Ideia Big Data, 59 percent of Brazilians would prefer a president from outside of the three major parties: the PT, the PSDB, and de facto President Temer’s Movimento Democrático Brasileiro (Brazilian Democratic Movement, MDB). In the same poll, a staggering 81 percent of respondents agreed that citizen-led movements (outside of electoral politics) have a better understanding of their problems.

Thus with an illegitimate government and an already tampered election, organization in social movements remains a key locus of hope for the Brazilian populace that wants its voice to be heard. Organizations such as the MTST and the MST (Movimento dos Trabalhadores Sem Terra, Landless Workers’ Movement) have a history of tireless work in organizing excluded sectors of the population to attain vital political benefits.

Lula himself acknowledged this history in the elegiac speech he gave before turning himself in. In front of the Metalworkers Union in São Bernardo do Campo, São Paulo, where Lula sought refuge, he addressed a crowd of demonstrators; “Boulos is 35. I was 33 when I held my first strike. You have a future, my brother.”

Populism at either end of the political spectrum utilizes the same mode of argument for dramatically different ends. To quote Mouffe, “the difference between a right-wing populism and a left-wing one owes to the fact that the former tends to restrict democracy while the latter works to extend and radicalize democracy.” While Bolsonaro and an unfortunate swath of Brazilians wax nostalgic for the last century’s military dictatorship, the MTST and MST reinvent a notion of citizenship and political participation which is radically inclusive of landless workers and the homeless.

Still, these two populisms have the same articulation: a powerful political establishment versus a people. The difference lies in how these roles are defined.  The left knows that celebrity businessmen like Doria and disgraced military officers like Bolsonaro are not common people, but the social movements remind us who exactly to align with: those most endangered by their power.

Already the social movements are primed for action. Just last June, MTST and MST helped organize a nationwide strike along with labor unions, clogging major thoroughfares and even an airport with throngs of people in protest of Temer’s regressive reform to labor and pension laws.

Most recently, hundreds of protesters — organized by the PT, MTST, MST and various labor federations — remained camped at the federal police headquarters in Curitiba, occupying the city where Lula’s trial was held. On April 16, Boulos and the MTST occupied the abandoned apartment for which Lula was convicted for receiving as a bribe. They hung a banner from the apartment which read “if it is Lula’s, it is ours.” The demonstrators could have said the same of Lula’s legacy.

After the failure of leadership by Brazil’s political establishment, a vast number of Brazilians find themselves without a team. The social movements keep pressure on those most deserving and prioritize those most in need, paving a way through populism that does not fall victim to regressive leadership.

Back to the ballot box

As Brazilians reckon with their democracy post-coup, social movements do vital work organized outside of these corrupted institutions. Nonetheless, an election is scheduled for October.

Although Brazilians have growing mistrust in their institutions, faith in their elections is not yet destroyed. The Fundação Gétulio Vargas found that nearly a third of the respondents stated they would not cast a valid vote for the presidency in 2018, yet 65 percent saw elections as the best means of turning the page.

Furthermore, 30 percent of respondents intend to vote for a candidate from outside of traditional politics. Should this mean candidates like Bolsonaro and Doria, clean politicians such as Guilherme Boulos and Manuela D’Ávila of the Communist Party of Brazil are the best candidates to oppose them.

To combat right-wing populism in Brazil, the left may need organize with similar tactics. Luckily, such a force already exists in the social movements. Those who seek to promote democracy in such trying times would do well to support them.