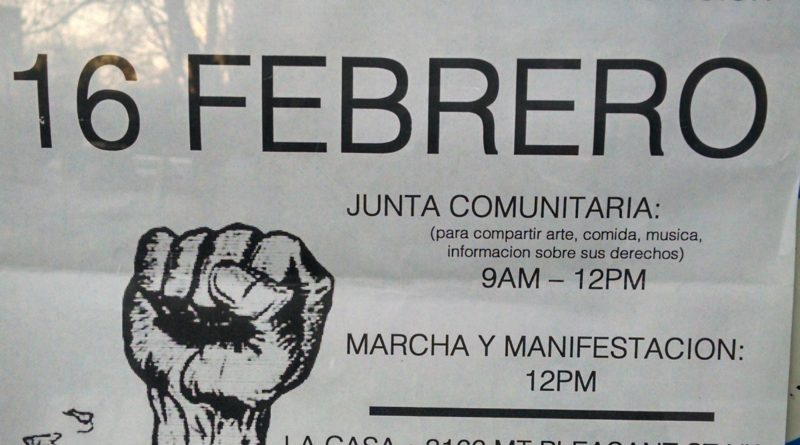 On February 16, restaurants across the United States closed their doors to join on “A Day Without Immigrants.” The protest comes after the increase in deportation and is a way to demonstrate to the Trump administration the vital role played by immigrant contributions to the United States economy.

The current level of enforcement demonstrated by ICE however, is not unprecedented. According to the U.S. Customs and Border Protection[i] in 2009, an average of 675 weekly immigration raids were conducted in family homes, workplaces, and local communities, which is important to recall as this statistic aligns with the last week’s arrests. The enactment of President Trump’s executive order pledges to place “all criminal aliens in deportation proceedings who are convicted of any crime.” [ii] Under the Trump administration, the Department of Homeland Security (DHS) has criminalized undocumented immigrants in the United States by stating that “anyone who had entered the United States illegally or overstayed or violated the terms of a visa” is now categorized as a criminal alien and subject to deportation.[iii]

Organizers told demonstrators not go to work, open businesses, purchase anything in stores or online, eat at restaurants or buy food, gas, or send their children to school. Immigrants and their supporters gathered in New York, Philadelphia, Washington DC and other major cities nationwide. According to NBC News 4, in the Washington metropolitan area alone more than 60 restaurants closed their businesses [yesterday] in solidarity with the immigrants who went out on strike.[iv] Chef Jose Andrés, renowned for previously standing up against Donald Trump also stood in solidarity.

The Council on the Hemispheric Affairs had the opportunity to talk to some small-business owners. Mariana Sánchez Ramírez interviewed Maria, owner of Honey’s Puerto Rican Empanadas Food Truck on Farragut Square in Washington, DC. Maria noted the lack of foot traffic on Farragut Square during the lunch rush. When asked about how the Day Without Immigrants had affected her, she noted her difficulties in buying yucca. “[On the morning of the protest] we had difficulty buying the food for the day because many of our ingredients are only found in Latino markets which were closed in observance of the protest.” Upon observation that other immigrant cuisine food trucks were present, Maria noted that because the ICE raids have taken place in predominantly Latino neighborhoods, other ethnic groups have not felt the strain of the immigration crackdown. “Latinos aren’t the only ones coming to this country illegally and yet our neighborhoods are the ones being targeted. Alexandria has a large population of Vietnamese immigrants who have not experienced raids.” Because of this, they do not feel connected to the cause.

Although Hispanics make up only 17 percent of the total population, they represent a 1.5 trillion-dollar consumer market[v]. Their entrepreneurship, love and hard work has made a path for them to start small businesses contribute about $668 billion dollars annually[vi][vii]. Furthermore, contributions from Latino households have helped maintain many services such as Social Security and Medicare.

While the protest had a large range of support, many educators took issue with organizers telling students to stay home from school. Jeff Silva Brown, a public high school teacher underscored this by stating “if you are protesting because you fear deportation, then you are boycotting the very institutions that look the other way when it comes to immigration status.” Try as the Trump administration might, the right to public education regardless of immigration status is protected under the constitution thanks to the 1982 Plyler vs Doe Supreme Court ruling. Teachers in public schools are ultimately at the front lines of protecting students and the only way to move a cause forward is by working together. However, organizers of the movement strove to accentuate what a day without immigrants would look like and those who missed work and school showed just that.