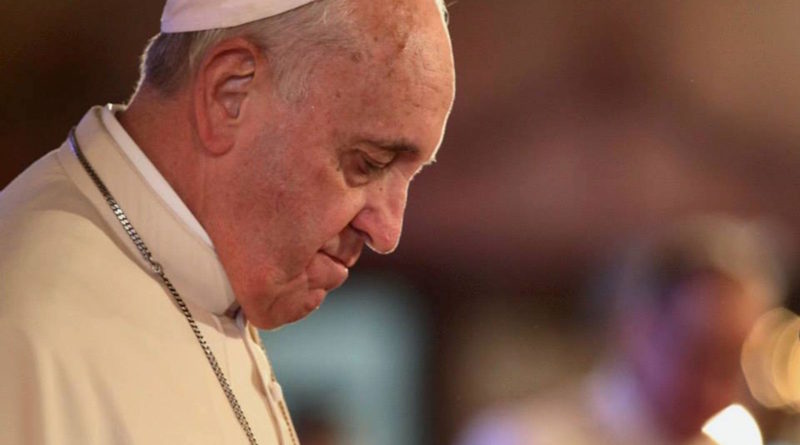 Pope Francis sparked wide outrage against the Catholic Church in Chile after he voiced his support for Fernando Karadima, a well-known Bishop in the Catholic community who was found guilty of abusing minors by the Church. The punishment that Karadima received from the Vatican in 2010 was a “lifetime of penance and prayer.”[i] This crisis has sowed discontent against the Catholic Church among Chilean laymen who have seen Karadima’s offenses go largely unpunished. Many Chileans, including Karadima’s victims, wished to see more punitive measures to be taken against their perpetrators. Furthermore, Pope Francis raised the ire of even more Chileans during his recent visit to the country, stating, in regards to Bishop Juan Barros covering up Karadima’s actions, it was all “calumny.”[ii] From the outset, there was an outcry over the Pope appointing Barros to become head of the Osorno Diocese in 2015 and it was the hope of many devout followers that this issue would be addressed following Francis’ arrival. What the Pope offered was more or less an apology to the victims of the abuse, but reinforced his position in supporting Barros as well as the Bishop’s general standing in the Church. As a result of the Pope’s’ stance, Catholicism in Chile has lost some of its following. The reason why this event is so significant is because it is an indication of a deepening trend in both Chile and Latin America as a whole. The event is symptomatic of a declining religious practice in the region. Chile has witnessed an understandable outcry with regards of the treatment of sexual abuse cases. Though the outcry is deserved with regard to the Churches’ treatment of sexual abuse cases, Catholicism has seen a drop in its following over the past several of decades. Latin America is becoming less Catholic indicating a growing global trend in the churches decline in the region.

South America has had a long history with the Catholic Church.[iii] After the region had been discovered by Columbus in 1492, the Catholic Church was quick to establish a presence in the new world. Missionaries helped establish infrastructure and a series of institutions for the populations in Latin America but had to overcome cultural differences. But the practice would reflect the unique cultures of the region representing an intermingling of two very different cultures. During Chile’s colonial period, which ended in 1818, the Church and state shared an intimate relation with one another[iv]. During this period the Church was involved in education and family affairs and received funding from the Chilean government. Separation of these two entities did not occur until the 1925; giving the church control over its own educational system, treasury, and retention of lands owned by it.

In September of 1973 a military Junta, backed by the United States government, took over Chile’s  democratically elected government with the aim of imposing a neoliberal economic model, inspired by the infamous ‘Chicago Boys’. It became clear that if Pinochet was to continue his reign over Chile the transition was going to be violent[v]. The Church in response to the increasing human rights abuses by the Pinochet regime began to eventually denounce their actions. As the government became more violent the Church became more vocal. It provided support to the poor and disenfranchised by voicing their grievances during this difficult time. The government was not able to attack the Catholic Church as easily as it could its own constituency. As a result, the Church tried to protect the rights of Chilean citizens who were being oppressed by the regime[vi]. What the Church had done for Chile earned it much public support. They had promoted human rights for Chileans during a violent regime as well as helped shaped human rights in the country. One would think that, given Chile’s long history with the Church, this would cement its standing in the country. However, over the past few years this has proven to be less than true.

The recent outrage over the church’s abuses in Chile is a manifestation of declining Catholic practice. Chile has historically been a heavily Catholic country, but over the years the faith has suffered from scandal after scandal which has rocked the Church’s moral authority and public following. Though Chile reflects Catholic practice in civil life through its traditions and culture, the country itself is far less religious than it has been in the past. This sentiment is embodied by President Michelle Bachelet, who is openly agnostic; exhibiting  a change in practice or, at the very least, a change in how Catholicism is viewed in the country. What has been most detrimental to the Catholic Church over the years is the behavior of its clergy. There have been cover ups by members of its senior clergy and sexual abuse allegations against the Catholic Church internationally over the past three decades, much of which has remained unresolved. The angered response of Chileans reflects the growing dissatisfaction felt by people across Latin America against the Catholic Church. From 1995 to 2017 Latin America has seen a decline in catholic practice[vii]. What’s even more striking is that Chile has become the most atheistic society among all the Latin American countries, seeing the biggest decline in Catholic following since the outbreak of the Karadima case. The priest’s impunity may have also touched a rather sensitive nerve considering that, in the past, there been cases where formerly charged priests have been reinstated simply because the Chilean government gave the Church special privileges. Those privileges offered a degree of amnesty and allowed no avenue to pursue justice. This dissatisfaction is, in part, with the lack of institutional integrity of the Church.

What the Church should be doing in Chile is trying to reconstruct a positive image of itself, and if that means removing a bishop responsible for such public outcry, then it should be carried out. As a result, the Vatican has sent out an investigator to Chile to discover if there was merit to the ensuing of the outcry. Barros still remains in Chile at this time, although perhaps the Pope should have removed the Bishop by now. If a member of the diocese violates the trust of its parish by abusing its power then the Church should strip that representative’s title and push them out of the clergy. A priest should never abuse those he is supposed to guide and any member of the Church who does, should not be a part of the clergy. Chilean victims are right to feel that the Church’s support for a purported abuser is a slap in the face. The Pope should have been more proactive in reassuring the public that the Vatican would investigate the issue. A Church is a community. But when the community is being harrassed by the very people who were supposed to be their spiritual leaders, then it should be no surprise that the community would buckle . Without trust or proper interaction with one another there is no reason for one to be a part of a congregation that does not engage in proper behavior.

Worldwide, the faith is seeing a precipitous drop in its practice. Latin America, for one, has lost followers to Protestantism or agnosticism. Europe is seeing an increase in atheism and the Middle East is consistently maintaining Islam as the dominant religious force. But to see the levels of decline as drastic as they are in Chile is still very hard to comprehend . The country once had 74% of its population practicing Catholicism in 1995. As of 2017, only 45% of Chile’s population claim to be Catholic[viii]. The decline of practicing Catholics in Chile may be a symptom of the Church’s poor image; it also may be a symptom of a generally less religious era, or a combination of both. Latin America has seen an increase in those who identify with “no religion”, especially in Chile, which would not have been seen in years past. In 2017 Chile had 35% of its populace identify as not having a religion[ix]. But given that people are not as amiable towards the Church as they once were , it will be difficult for the Church to build enough public support without engaging in some political maneuvers. One of two things will happen to the Church in Chile. Either it will shrink to the point where it has lost most of its influence in public and political life, or it reorients how it deals with public scandal and controversy. Either way, the Church needs to make a decision regarding these issues or risk further decline in the hemisphere.

[iii] Schwaller, John. “The History of the Catholic Church in Latin America: From Conquest to Revolution and Beyond.” JSTOR. January 14, 2011. Accessed January 25, 2018. http://www.jstor.org.ezproxy.hope.edu/stable/j.ctt9qg53g.5?seq=11#page_scan_tab_contents

[v] Schwaller, John. “The History of the Catholic Church in Latin America: From Conquest to Revolution and Beyond.” JSTOR. January 14, 2011. Accessed January 25, 2018. http://www.jstor.org.ezproxy.hope.edu/stable/j.ctt9qg53g.5?seq=11#page_scan_tab_contents