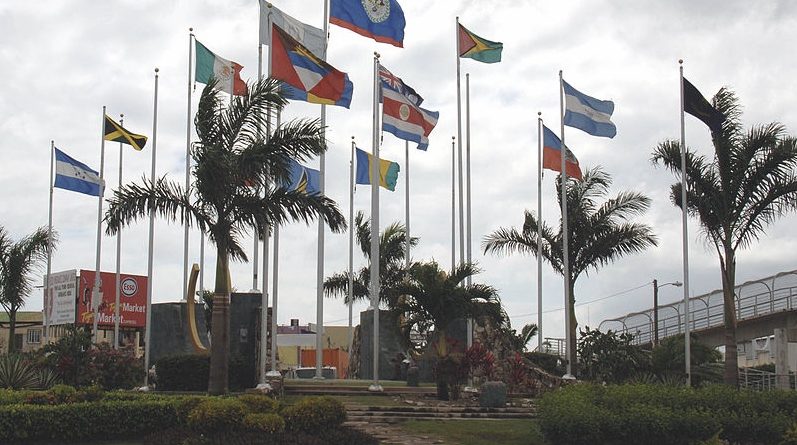 On February 16, 2017, the 28th Inter-Sessional Meeting of the Conference of Heads of the Caribbean Community (CARICOM) was held in Georgetown, Guyana. Secretary General Irwin LaRocque reaffirmed CARICOM’s need to collectively work towards economic development, regional security, and international relations;[i] however, the Caribbean Single Market and Economy (CSME) is a CARICOM development initiative which faces serious challenges in formulating a consensus on the free movement of labor, national security, and international trade. Though CSME integration must not fall victim to equivocation and procrastination, a viable alternative is needed to counter the discriminatory nature of the U.S-backed Caribbean Basin Initiative (CBI). The CBI was established in 1984 as the Caribbean Basin and Economic Recovery Act, which favored the liberalization of trade for U.S companies in the textile and apparel sectors.[ii] Given the asymmetrical economic relations between the Caribbean and some of the more competitive foreign markets, it is necessary for CSME to be a free and fair economic union. It is crucial CSME must not stall negotiations, and fall victim to U.S. economic preeminence, in the process of becoming a fully independent economic union.

At the heart of the Caribbean Single Market and Economy (CSME) is “The idea that the movement of people should be treated equally as the movement of goods.”[iii] Disputes over the free movement of labor and its national security implications have been debated since the formation of CSME in 2006. As an economic union, CSME grants the free movement of nationals without a work permit—including wage earners and self-employed at time of settlement.[iv] Individuals that qualify for free movement within CSME include university graduates, artists, musicians, media workers, and sportspersons. CSME freedom of labor laws apply to the twelve member nations: Antigua & Barbuda, Barbados, Belize, Dominica, Trinidad & Tobago, Guyana, Jamaica, St. Kitts and Nevis, St. Lucia, St. Vincent and Grenadines, Suriname, and Grenada.[v]

Jamaica’s People’s National Party (PNP) condemned the incumbent government (Jamaica Labour Party JLP) for conforming to the CSME inequitable free movement of labor provision, after Jamaican nationals were barred from entering other CSME member states. [vi] Director of Work Permits, Lisa-Ann Grant, stated that “some member states have not approved the new categories in law and this creates a challenge for Jamaicans with CARICOM skill certificates.”[vii] It is apparent that CSME has not entirely created a “level playing field” among all CSME member states concerning the free movement of labor. However, multilateral talks will continue on July 4-6, 2017, at the 38th regular meeting of CARICOM in Grenada to further address issues facing the Caribbean’s Single Market and Economy.[viii]

On July 7, 2016 at the 37th Regular Meeting of the Heads of Government of CARICOM in Georgetown, Guyana, the Chairman of the Conference, Dominican Prime Minister Roosevelt Skerrit, iterated that fully implementing the CSME agreement “[is] our only option to achieving sustainable growth and development in the Caribbean region.”[ix] At the February 2017 inter-sessional meeting, in an attempt to preserve CSME unification, President David Granger of Guyana affirmed, “The ‘Spirit of Chaguaramas’ is not the ghost…of a dead project. It is the vital breath of life that inspires us to intensify regional integration.”[x] Despite having established the Caribbean Single Market and Economy, the inviability of the Caribbean economy is a barrier towards further regional integration between CSME member states.

De-Risking of Banking in the Caribbean

In 2016 eight domestic financial institutions in Barbados had their accounts terminated, due to the strict regulatory measures adopted by their Canadian correspondent banks.[xvii] Similarly, the Central Bank of Belize reported that correspondent banking relationships with the United States were terminated with seven domestic banks.[xviii] The 2015 World Bank report indicated that 89 percent of the Caribbean region reported significant to moderate declines in their correspondent banking relationship.[xix] At the 37th regular meeting of the Heads of Government of CARICOM, the leaders committed to establishing a global forum tackling the negative impact  of financial de-risking activity; though, they also discussed the possibility of rerouting foreign banking transfers through partner banks that still have a relationship with foreign correspondent banks in order to circumnavigate strict regulations. Tighter regulatory measures have had a negative effect on easing access to foreign exchange earmarked for small businesses. However, it is also possible for Caribbean countries to diversify currency transactions, or use the Federal Reserve as a means of transferring capital. However, currency diversification measures are only “band-aid” solutions to structural barriers.

Stricter enforcement of the arrest warrant treaty, as part of CARICOMs Crime and Security Strategy (CCSS), was agreed upon at the 37th regular meeting. The CCSS is a regulatory extension measure of CSME free movement of labor. The Crime and Security Strategy guarantees that a perpetrator of a crime in one country who chooses to travel to another country, within CARICOM, can be detained and deported back to their homeland to face prosecution.[xx] Although there is consensus on the CCSS arrest warrant treaty, the logistics behind enforcing such regulation will be complicated due to differences in domestic law. For example, Article VIII of the CCSS arrest warrant treaty states that an “executing State Party may take the necessary coercive measures against a requested person in accordance to its national law.”[xxi] Therefore, respective of the issuing country’s reasons for arresting an individual, it is ultimately up to the executing country to detain the requested person in accordance with their national law.

The complacency of CSME member states with regard to the free movement of labor, the promotion of regional integration, and the implementation of the CCSS arrest warrant treaty can lead to “brain drain,” a phenomenon that mainly negatively impacts the least developed countries within the Caribbean. Therefore, the linkage of national security and freedom of mobility are two sides of the same coin, and should be examined in relation to the countries most heavily impacted by the destruction of small business enterprises. Financial de-risking regulation combined with the free movement of labor, will only further exacerbate the negative effects of “brain drain.” This outlines that the link between nation security, freedom of movement, economic and financial regulation complicates policy formulation in the Caribbean. Similarly, as will be shown, inadequate trade policy only increases barriers towards economic development.

Earlier this year the Caribbean Development Bank (CDB) issued $250, 000 USD to aid the loss of correspondent banks funds in the region due to financial de-risking activity. At the 47th meeting of the board of governors, CDB President Dr. Warren Smith said, “It is so because we are small open economies and for that reason we have to depend on very regular trade. You cannot engage in trade if you cannot engage in the international financial system.” [xxii] The links between access to finance and trade are critical to the development of small business enterprises in the Caribbean. The linkage between trade and de-risking, is most heavily noticed with SBEs enterprises that are sensitive to imports. It is critical for SBEs to receive adequate financial investment from the domestic banks through a correspondent bank, to have an adequate financial infrastructure in order to conduct business by means of international trade. Protocol VII in the CSME introduces safeguards towards sensitive trade industries, by allowing the temporary implementation of tariff and nontariff barriers, to minimize the adverse effects of a decrease in demand for local industry.[xxiii]However, the implementation of tariffs and quotas on imports will provide the requisite protection from foreign market saturation,[xxiv] though it will not necessarily influence the ability of local industries to access adequate capital for investment. Instead, implementing protectionist trade measures, while strict regulation on foreign capital flows are being maintained, will negatively affect consumer surplus.[xxv] This would result in a decrease in demand and limited growth for sensitive Caribbean industries (i.e. sugar, bananas, diary). Therefore, it is crucial that adequate trade regulation is implemented, in accordance with fair financial regulations, to incentivize small business enterprises in the Caribbean community in order to promote economic autonomy in the CSME.

The process of adequately formulating, implementing, and regulating an effective Caribbean economic union is highly convoluted. During the 38th Regular Meeting of the Heads of Government of CARICOM, which is expected to take place July 4-6, 2017, it is urgent for the Caribbean community to assess the effectiveness of the CCSS arrest warrant treaty and further develop solutions to mitigate the negative effects of financial de-risking activity. These measures would expedite harmonization of the CSME economic union. Amidst the core challenges now facing the Caribbean economy are a lack of financial independence, minimal endogamous integration, and inefficient regulation contributes to a biased incentive structure against small businesses.

Despite the structural challenges facing Caribbean economic integration, President David Granger of Guyana affirmed at the 28th Inter-Sessional meeting in February, that if the Caribbean community were “to escape the hazard of economic emasculation in today’s global environment, [it] must expedite the full implementation of the CARICOM Single Market and Economy (CSME).”[xxvi]

The public education campaign proposed at the 37th Regular Meeting in July 2016, highlighting the benefits and provisions of belonging to the CSME, has so far been successful.[xxvii]  In Jamaica, the Ministry of Foreign Trade has developed education workshops as an effort to develop a partnership between the public and private sector on CSME integration.[xxviii] Similarly, in Barbados, CARICOM Immigration and Custom Officers took part in a two day session establishing a common understanding of the free movement of persons, which is a provision within the CSME.[xxix]However, CSME member states are planning to reach a consensus on the principle challenges of financial de-risking and international trade at the upcoming 38th Regular Meeting of the Caribbean community.

[xxv] Consumer Surplus: economic measure of consumer benefit, difference between what consumers are willing and able to pay for a good or service relative to its market price. “Consumer Surplus,” Investopedia,   http://www.investopedia.com/terms/c/consumer_surplus.asp.