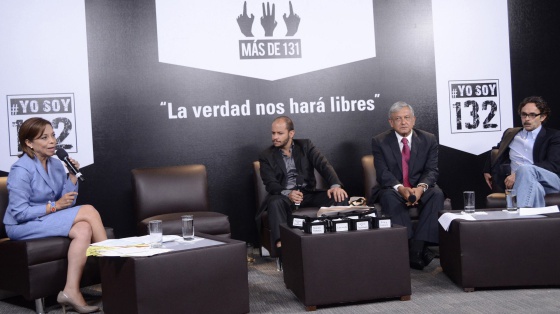 The Mexican presidential elections on July 1 appear to be a fait accompli for front-runner Enrique Peña Nieto of The Institutional Revolutionary Party (PRI), who currently enjoys a 15 percent lead in the polls. However, beneath the illusion of a smooth return to the party’s traditional position lie the significant political actions of the student-led Yosoy132 movement. Peña Nieto currently leads well ahead of Josefina Vazquez Mota, a head of the ruling National Action Party (PAN), Andrés Manuel López Obrador or AMLO (The Party of the Democratic Revolution) and Gabriel Quadri de la Torre (The New Alliance Party).

According to the Consulta Mitofsky polling firm, only one third of Mexican voters appear to be interested in the political debates, reflecting wide spread disillusionment with the Mexico’s political situation.(1) The political efforts of Yosoy132 have the potential to reverse this political apathy. A little over a month ago, 132 students started the Yosoy132 movement in Mexico City in an effort to promote the democratization of media and communication channels, thus nurturing a thoughtful and informed vote.(2) National networks did not plan to broadcast the debates until Yosoy132 protested the lack of coverage.

The Federal Electoral Institute has organized two debates, on May 6 and June 10, each involving all four major presidential candidates. The first debate gave the candidates an opportunity to challenge Peña Nieto’s popularity and possibly steal some of his votes. Vazquez Mota, head of the ruling National Action Party (PAN) and Andres Manuel Lòpez Obrador or AMLO used the opportunity to allude to the PRI´s alleged connections with drug cartels under Ernesto Zedillo and the possibility of a return to the previously authoritarian style of the PRI.

Although the PAN has recently lost favor due to current President Felipe Calderón’s controversial drug-policies, critics have largely avoided discussing Vazquez Mota’s avowed affiliation with Calderón in the media.

As El Economista writes, victory requires that the leader maintain the lead in the polls and at the same time candidates below him do not gain popularity.(3) Peña Nieto’s stable electoral preferences before and after the debate predict his victory. Meanwhile, AMLO has succeeded in gaining additional votes and now enjoys second place in the polls, which puts him in a strategic position.

Gabriel Quadri de la Torre, a candidate with strong environmental and liberal views, has gained significant ground in the polls following the first debate. Support for Quadri doubled from one to two percent of voters and his Nueva Alianza (New Alliance) Party benefited significantly from the publicity.

Following the critiques over the May debate, the Federal Electoral Institute changed the debate’s structure to allow for indirect questions, introduced thematic parts and outlawed interruptions of extended monologues. The institute added an extra ten minutes for each of the candidates to interact.

Josefina Vàzquez Mota took full advantage of these changes. In an unsuccessful attempt to regain her second place standing, which had been taken by Lopez Obrador, her attacks on all the candidates brought a distinctly negative atmosphere to this debate. Vázquez critiqued the PRI’s policy to “surrender against organized crime and abuse of power” and ALMO’s tactics of “populism in economic crisis”. She remains in third place with a flagging 21.4 percent of the votes.(4)

Following the first month of activity, Yosoy132 organized a third debate on June 19. According to its manifesto, Yosoy132 does not explicitly support any candidate or political party, but its leadership recently expressed its anti-Peña Nieto position. Consequently, Peña Nieto declined to participate in the third debate, which further attests to the student movement’s influence.(5) The Mexican media initially criticized his decision, but the PRI candidate has yet to lose ground in the polls. Yosoy132 aired the debate on YouTube and had a possibility to reach an audience of 22.7 million of Mexican Internet users.(6)

Yosoy132 representatives declared that the official debates, organized by the Federal Electoral Institute, did not satisfy their goal to clarify candidates’ positions. For this reason, the third debate diverged from the previous two, when the host pressured participants to answer in a definitive manner in an effort to cut political rhetoric and lay bare their policies. This in response to what student groups claim to be citizens’ right to know about candidates’ propositions in order to solve the country’s numerous crippling problems.(7)

The candidates also discussed topics not covered in previous debates including: same sex marriage and contraceptives. Given the candidates’ were largely unprepared for such questions, they frequently evaded the questions by stating a need for “further consultations.”(8)

As Election Day approaches and the final days of the campaign came to an end, personal preferences and emotional factors are beginning to play important roles in the decision making process, despite Yosoy132’s efforts to focus on the policies. Throughout an eventful race, the front-runner has successfully maintained his lead and most Mexicans expect a victory for Peña Nieto on July 1. While in the end critics might call this a failure for the Yosoy132 movement, the activity of the group has triggered a public debate, which is all more valuable in promoting and developing a more vibrant, democratic Mexican civil society.